Commerce secretary: China virus could bring jobs back to US 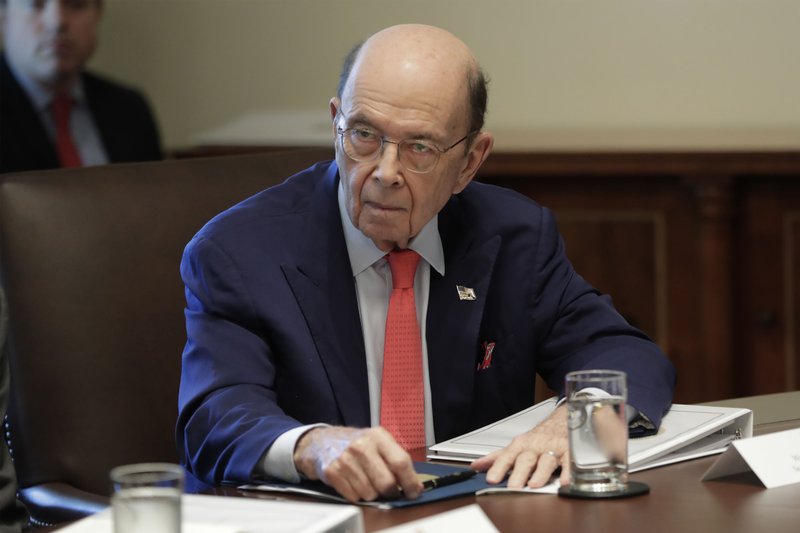 FILE - In this Oct. 21, 2019, file photo, Commerce Secretary Wilbur Ross listening to President Donald Trump speak during a Cabinet meeting in the Cabinet Room of the White House in Washington. Ross suggested Thursday, Jan. 30, 2020, that a viral outbreak in China could offer an upside to the U.S. economy by encouraging manufacturers to move back to America. (AP Photo/Pablo Martinez Monsivais, File)

WASHINGTON (AP) — Commerce Secretary Wilbur Ross suggested Thursday that the viral outbreak in China might offer an unexpected benefit for the U.S. economy: It could encourage American manufacturers in China to return to the United States.

“I think it will help to accelerate the return of jobs to North America. Some to U.S., probably some to Mexico as well,’’ Ross told Fox Business Network.

The new virus, from the coronavirus family, has paralyzed business in China. The industrial hub of Wuhan and other Chinese cities are on lockdown. China has reported more than 7,700 cases and 170 deaths.

The crisis has also begun to ripple through U.S. companies with operations in China. Apple CEO Tim Cook has said that the company’s suppliers in China have been forced to delay reopening factories that closed for the Lunar New Year holiday. More than half of Starbucks’ stores in China are now closed. McDonald’s has closed several hundred restaurants in China.

Ross emphasized that he didn’t “want to talk about a victory lap over a very unfortunate, very malignant disease.’’

He added, though, that “the fact is, it does give businesses yet another thing to consider when they go through their review of their supply chain.’’

Even before the viral outbreak, many U.S. and other foreign companies had been rethinking their presence in China and considering their options for relocating elsewhere, possibly elsewhere in Asia. That is partly because President Donald Trump has imposed tariffs on $360 billion in Chinese imports in a war over Beijing’s economic policies and partly because Chinese labor and other costs have been rising.

But skeptics doubt that many American companies with deep roots in China might abandon the country purely over the virus. For one thing, no one knows how long the viral outbreak will last or how much damage it may inflict. And it takes significant time for companies to choose suppliers or locations for their factories.

Rosemary Coates, whose Blue Silk Consulting firm helps companies make such decisions, said it was “ridiculous’’ to think the viral outbreak would result in a significant return of business to the United States.

“You can’t snap your fingers,’’ she said. “It can take 18 months or two years to find another supplier. It isn’t easy. It’s complicated.’’

Wuhan, a center of China’s steel industry, has attracted General Motors and many other foreign manufacturing giants.

“You can’t just say General Motors is going to pick up and move away,’’ Coates said. “They have a manufacturing plant there and expertise there. Their supply chain runs through there.’’

In fact, U.S. direct investment in China, which includes factories, continued to rise even after the SARS outbreak disrupted the Chinese economy in 2003. And labor costs will continue to remain far higher in the United States than in China and other Asian countries such as Vietnam.

“Companies that are leaving China are not coming to the U.S.,’’ said Coates, who is also executive director of the Reshoring Institute, a nonprofit that researches issues surrounding corporate decisions on whether to return to the United States. “They’re going to other Asian countries …. If low cost is the only goal, then the U.S. is not the answer.″

After Ross’ comments drew criticism, the Commerce Department issued a statement: “As Secretary Ross made clear, the first step is to bring the virus under control and help the victims of this disease,” it said. “It is also important to consider the ramifications of doing business with a country that has a long history of covering up real risks to its own people and the rest of the world.″

“This is not about trade, jobs or any of that,’’ Kudlow told reporters. He added: “The president has a lot of compassion for the Chinese situation. The threat of large numbers of people dying is a terrible thing. We just want to help.’’