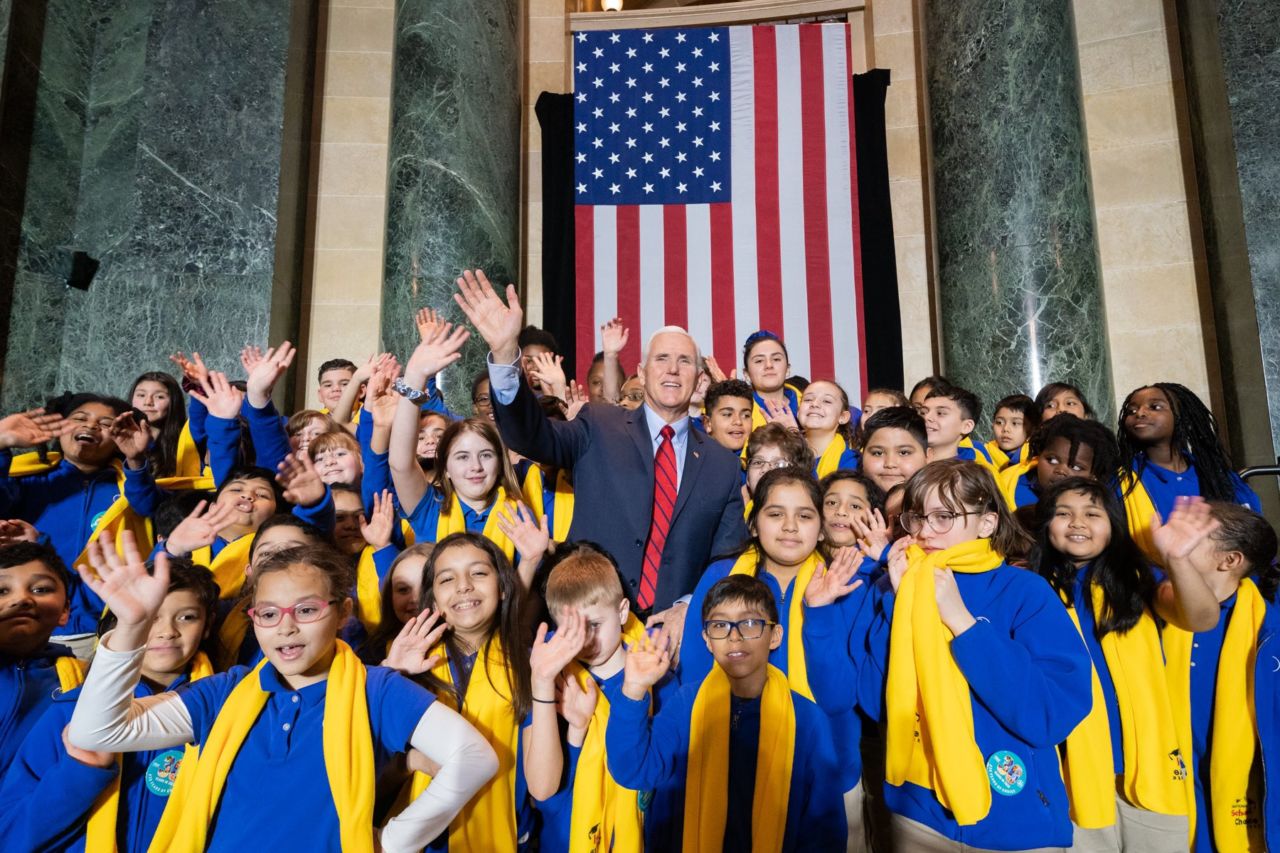 MADISON, Wis. (AP) — Vice President Mike Pence touted alternatives to a public school education during a visit Tuesday to the state where the private school voucher program began, stopping in battleground Wisconsin for a noontime celebration in the state Capitol.

Pence, and U.S. Education Secretary Betsy DeVos were both briefly drowned out by chants of “shame” from dozens of protesters who gathered one floor down in the Capitol building.

The protesters, some carrying signs calling for the separation of church and state, also booed throughout their comments.

School choice — which includes private school vouchers, charter schools and other nontraditional options — has long been an issue that divides Republicans and Democrats, particularly in Wisconsin. Conservatives have championed offering students an alternative to public schools, giving Pence a chance to appeal to Republican voters in a swing state during national school choice week.

“I’m here in Wisconsin because this is where it all began,” Pence said.

Former Gov. Tommy Thompson, who signed the law creating the first voucher school in Milwaukee 30 years ago, attended the rally. Current Gov. Tony Evers, a Democrat and longtime voucher school opponent, was not there.

Pence noted Evers’ absence when mentioning that there was a bill pending in the Wisconsin Legislature, supported by Democrats, that would phase out choice schools in the state.

“I know the governor couldn’t be here with us today, so let’s make sure he hears this: We’re not going to let that happen,” Pence said to cheers and some boos from protesters.

Pence’s visit came two weeks after he was with President Donald Trump for a campaign rally in Milwaukee, just down the street from where Democrats will gather for their national convention in July. Pence said school choice advocates had a friend in Trump, a comment that drew jeers from the protesters.

Milwaukee was the birthplace 30 years ago of the private school voucher program, which extends taxpayer money to parents who want to send their children to private schools. School choice programs have expanded in Wisconsin, and across the country, often pitting conservatives against liberals who say the alternatives weaken public schools by diverting funding to pay for a separate education system.

“Wisconsin has an extraordinary record of school choice and every family in Wisconsin should be proud,” Pence said.

“Trump and his cronies are sabotaging public education because it’s not their children who go to public schools,” Wikler said.

About 700 students from voucher schools in Wisconsin attended the event along with U.S. Rep. Bryan Steil, state lawmakers and Patience Roggensack, chief justice of the Wisconsin Supreme Court.

Evers, who was state superintendent for education in Wisconsin before being elected governor in 2018, skipped the event. His Capitol office is just a few feet away from where Pence spoke, but he was out of the building and did not greet the vice president during his visit to the state.

Evers’ spokeswoman Melissa Baldauff said Evers had meetings outside the building. She said the vice president’s office had not reached out to Evers and they learned about the visit not from the White House but instead state Capitol police.

Pence’s appearance at the Capitol marked the first time a sitting vice president held an event inside the 103-year-old building.

Both Republican and Democratic strategists said Pence’s appearance in Wisconsin’s liberal capital city gave him a chance to appeal to conservatives on an issue they care about — school choice — while also sending a signal that Trump’s campaign would look for votes anywhere it could find them.

“It’s a smart tactic,” said Democratic strategist Scott Spector. “They are taking nothing for granted.”