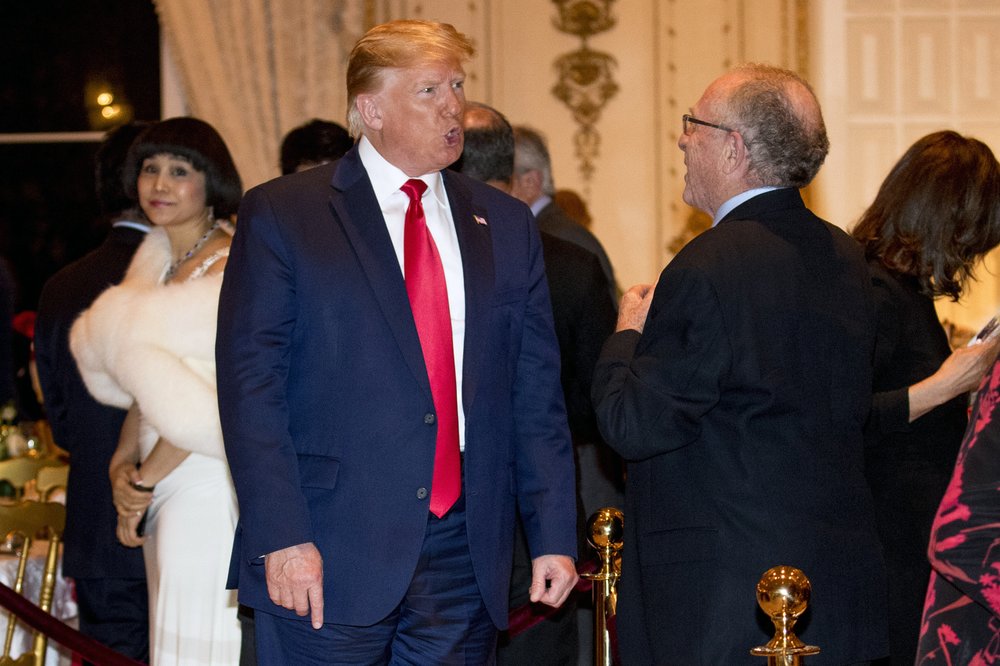 FILE - in this Dec. 24, 2019, file photo, President Donald Trump speaks to attorney Alan Dershowitz, right, as he arrives for Christmas Eve dinner at Mar-a-lago in Palm Beach, Fla. Retired law professor Alan Dershowitz says he hasn't changed at all and has a long history of representing people whose views he doesn't necessarily agree with. Dershowitz is part of President Donald Trump's defense team at the Senate impeachment trial. (AP Photo/Andrew Harnik, File)

The retired Harvard law professor had already been asked by Trump’s legal team to assist with the defense at his impeachment trial and, with the case opening in a matter of weeks, the president wanted to know: Was he onboard?

“He said, ‘Everybody wants to do this thing, but I want you,’” Dershowitz recalled in an interview with The Associated Press.

Dershowitz, whose clients have included O.J. Simpson, Claus von Bulow and Mike Tyson, ultimately said yes, joining a legal team that, starting Saturday, will present the defense at only the third impeachment trial of a American president in U.S. history.

Trump’s attorneys say Dershowitz and Ken Starr, the former independent counsel during President Bill Clinton’s impeachment, will have “discrete functions that they will be addressing” at trial.

Dershowitz’s task is to make the argument — widely rejected among scholars — that an impeachable offense requires criminal-like conduct. Dershowitz joked Thursday that if he sounded sniffly, it was because he’d been buried in musty history and law books to prepare.

While it’s just another high-profile case in a career full of them, Dershowitz’s defense of Trump has befuddled associates, friends and former students, who struggle to make sense of his forceful advocacy for the president and who fervently disagree with the legal positions he’s taken and even the facts he’s advanced in Trump’s defense.

“Rubbish” is how one law professor who studied under Dershowitz, Frank Bowman at the University of Missouri, described his views on impeachable offenses. A longtime Harvard Law School colleague, Laurence Tribe, wrote in a Washington Post opinion piece that the argument “has died a thousand deaths” but nonetheless “staggers on like a vengeful zombie.” Some, meanwhile, have seized on video of a 1998 interview when Dershowitz expressed virtually the opposite view of what he’s saying now about an impeachable offense requiring a crime.

For his part, Dershowitz maintains there’s nothing inconsistent or unusual about the positions he’s taking.

Though he’s been a vocal defender of Trump the last three years, he insists it’s not about this particular president. Rather, he’s trying to prevent impeachment from being weaponized into a “partisan process,” where any president can be removed over non-criminal abuses of power.

“I’ve always taken positions that are principled and often unpopular and often in defense of people I don’t particularly support,” Dershowitz said, citing his defense of Neo-Nazis who wanted the right to march through Skokie, Illinois.

Nancy Gertner, a retired federal judge in Boston who has known Dershowitz for years, says it’s true that he hasn’t changed — he still gravitates toward the media spotlight, high-profile cases and “positions he thinks will prove how principled he is.”

But she says it’s impossible to reconcile his statements on behalf of Trump, and his extraordinarily expansive view of presidential authorities, with the civil libertarian bent he’s expressed over the decades and his stated opposition to unchecked government power. Some of what she’s heard him say is “horrifying.”

“I’ve known him for a very long time,” she said. “I’ve never seen anything like this.”

Even before he made the case against impeachment in a book, Dershowitz has defended as lawful some of Trump’s most scrutinized actions. In op-eds and TV appearances, he has accused special counsel Robert Mueller of partisan bias, ridiculed the idea Trump could have obstructed justice by firing his FBI chief and said presidents enjoy more power than kings.

“A civil libertarian should be concerned about deploying the levers of power for the wrong purposes,” said Gertner, who is now a senior Harvard law lecturer. “These are not civil liberties positions. These are positions to garner attention to put him in the position that he now is in, which is to represent the president.”

Harvey Silverglate, a friend of Dershowitz’s for more than 50 years, said his positions on Trump clearly make him unpopular “among the legal intelligentsia nationwide.” But he said Dershowitz specializes in cases where the defense is difficult or unique, and the client unpopular.

Though Trump may not be an underdog in the conventional sense, Silverglate wrote in an email, “his impeachment does present just the kind of case, challenge and client for which Dershowitz is perfect — a high-profile assault on an individual who has powerful enemies and who is being ‘prosecuted.’”

Dershowitz says he’s convinced that the same people criticizing him would be applauding him if he was prosecuting the House impeachment case. The attacks, he said, have been “ferocious.” He calls it a “shoe on the other foot test.”

“People say I’m not a constitutional lawyer because they don’t like the side I’m on,” Dershowitz said. “They say I’m too old, I’m a has-been.”

Trump has watched Dershowitz defend him on Fox News for years, sometimes tweeting links to the lawyer’s statements that he finds especially helpful. Through the Mueller investigation and into impeachment he has been enamored with the possibility of assembling a legal dream team.

But White House aides cautioned Trump against bringing Dershowitz onto his team, concerned that Dershowitz was a self-promoter whose showboating style wouldn’t put Trump’s interests first.

They also feared Dershowitz’s ties to Jeffrey Epstein and the surrounding legal drama would be a distraction for the defense. Trump overruled them.

According to one person familiar with the decision, Trump wanted the appearance of a bipartisan defense team. And he has always valued attorneys who can make the case to the public on Fox News, his preferred platform.

By the time of their Christmas Eve conversation, Dershowitz had already been approached about a role on the team. But his wife, who was with him that evening at Mar-a-Lago, was more apprehensive, concerned he’d lose his independence.

Trump sought to offer reassurance on that point, saying that while he appreciated that concern, it was nonetheless important to consider “how important this was for the future of the country and for precedent and all that,” Dershowitz recalled.

Within days, his participation was settled.

“People have already said that my arguments will be bonkers or errant nonsense,” Dershowitz said. “My only point is: Listen. I’m going to lay out a very serious constitutional argument. Maybe you’ll agree with it or maybe you won’t, but let’s have a debate on the merits.”