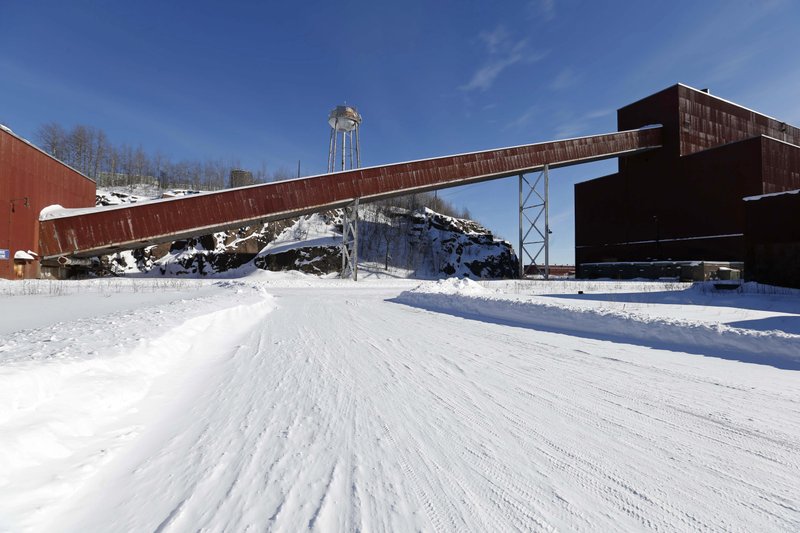 FILE - This Feb. 10, 2016 file photo shows a former iron ore processing plant near Hoyt Lakes, Minn., that would become part of a proposed PolyMet copper-nickel mine. The Minnesota Court of Appeals has rejected two of the most important permits for the planned PolyMet copper-nickel mine in northeastern Minnesota in a major victory for environmentalists. A three-judge panel ruled Monday, Jan. 13, 2019, that the state Department of Natural Resources erred when it declined to order a proceeding known as a "contested case hearing" to gather more information on the potential environmental impacts of the project. (AP Photo/Jim Mone, File)

ST. PAUL, Minn. (AP) — The Minnesota Court of Appeals on Monday rejected some of the most important permits for the planned PolyMet copper-nickel mine in northeastern Minnesota, giving a major victory to environmentalists.

A three-judge panel ruled that the state Department of Natural Resources erred when it declined to order a proceeding known as a “contested case hearing” to gather more information on the potential environmental impacts from the mine. The court also said the agency erred when it issued PolyMet’s permit to mine without imposing a fixed term on that permit. So the court sent the dispute back to the DNR with orders to conduct the potentially lengthy hearing, during which an administrative law judge would take testimony and sort out conflicting evidence.

Environmentalists celebrated the decision , while PolyMet said it would consider taking the case to the Minnesota Supreme Court and the DNR said it was considering its options.

At issue were PolyMet’s permit to mine and its two dam safety permits. The court suspended those permits in September because it wanted more information on how the DNR was responding to two major developments since it approved the permits in 2018. Swiss-based commodities giant Glencore took a majority stake in the project. And there was a disastrous failure at an iron mine in Brazil of a tailings basin dam that had some similarities with PolyMet’s planned dam.

Opponents of the project urged the appeals court at a hearing in October to cancel the two permits and order further proceedings to determine whether the mine’s environmental and financial safeguards were adequate. They argued that the public and court would be unable to enforce the terms of the permits as written by the DNR.

But attorneys for the department and PolyMet argued that the project has undergone thorough public reviews that met all the legal requirements, and that the permits contain plenty of safeguards to protect the environment and taxpayers.

The appeals court said in its decision that the fact the DNR might have considered evidence during its environmental review and permitting proceedings did not relieve the agency of the need to conduct a contested case hearing. The court did not address most of the opponents’ other arguments because it found that the agency had committed legal errors that required reversing the agency’s decision to grant the permits.

The DNR and PolyMet have 30 days to ask the Minnesota Supreme Court to hear the case. The agency said the appeals court’s opinion has implications not only for this one project, but the role of contested case hearings in the permitting process more broadly.

“Notably, the Court’s opinion does not draw conclusions about the validity of the scientific analyses underlying the DNR’s decisions,” the agency said in a statement. “We remain confident in the solid foundation of our technical work. ”

PolyMet said in a statement that the company and regulatory agencies have “strictly followed” the comprehensive process established by state law for the past 15 years.

“We are confident that we can produce these high-demand metals responsibly, with Minnesota workers, and in compliance with all applicable regulations,” the company said.

But Paula Maccabee, an attorney for WaterLegacy, one of the groups that challenged the permits, called the decision “an absolutely enormous victory.” She said in an interview that the hearing will mean a trial-like proceeding “in an open and transparent process for everyone to see. That mean’s PolyMet’s toxic environmental threats will finally get the scrutiny they deserve.”

The appeals court noted the opponents’ concerns about the potential for acid mine drainage, the safety of the design for the mine’s waste pond and the effectiveness of plans for controlling contamination seepage from it, and whether the permits contain sufficient financial safeguards to cover long-term cleanup costs.

Minnesota Senate GOP Majority Leader Paul Gazelka tweeted that the decision was “extremely disappointing. Thousands and thousands of jobs for the Iron Range are again put on hold by liberal courts and radical environmentalists.”

The case was one of several challenges pending before the courts in the long-running battle over the project between Babbitt and Hoyt Lakes, which would be Minnesota’s first copper-nickel mine.

Next week a Ramsey County judge will open what’s expected to be a five- to 10-day fact-finding hearing on alleged irregularities in how the Minnesota Pollution Control Agency handled the water permit for the project. MPCA officials allegedly tried improperly to suppress the federal Environmental Protection Agency’s concerns over the permit and keep them out of the public record.

The judge will later present his findings to the Court of Appeals, which will consider his report when it decides on a separate challenge by environmental and tribal attorneys to the water permit. The plaintiffs in that case include the Fond du Lac Band of Lake Superior Chippewa, whose reservation is 70 miles (110 kilometers) downstream from the planned site.

PolyMet has been working to raise $1 billion in construction financing while it fights off the remaining legal challenges.