CES Gadget Show: Surveillance is in — and in a big way 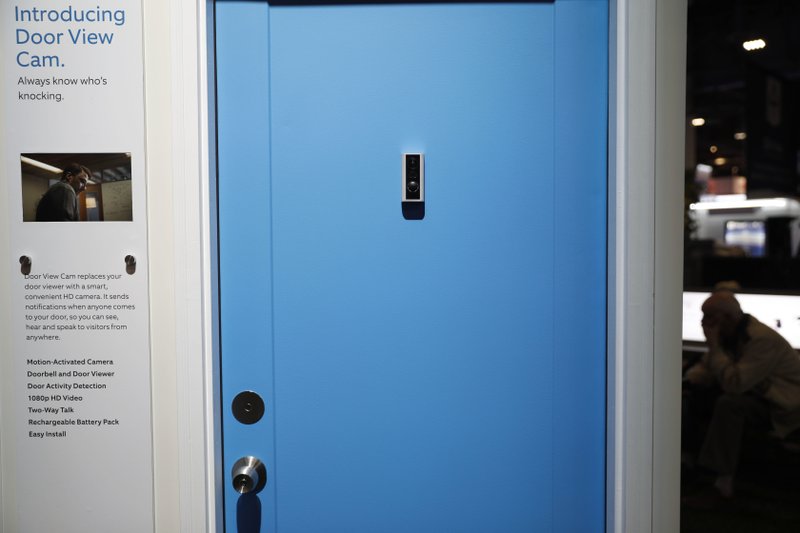 FILE - In this Jan. 7, 2019 file photo, the new Door View Cam is on display at the Ring booth before CES International in Las Vegas. From the face scanner that will check in some attendees to the cameras-everywhere array of digital gadgets, the CES gadget show is all-in on surveillance technology — whether it calls it that or not. Nestled in the “smart home” and “smart city” showrooms at the sprawling Las Vegas consumer tech conference are devices that see, hear and track the people they encounter and sometimes analyze their looks and behavior. (AP Photo/John Locher, File)

From the face scanner that will check in some attendees to the cameras-everywhere array of digital products, the CES gadget show is all-in on surveillance technology — whether it calls it that or not.

Nestled in the “smart home” and “smart city” showrooms at the sprawling Las Vegas consumer tech conference are devices that see, hear and track the people they encounter. Some of them also analyze their looks and behavior. The technology on display includes eyelid-tracking car dashboard cameras to prevent distracted driving and “rapid DNA” kits for identifying a person from a cheek swab sample.

All these talking speakers, doorbell cameras and fitness trackers come with the promise of making life easier or more fun, but they’re also potentially powerful spying tools. And the skeptics who raise privacy and security concerns can be easily drowned out in the flashy spectacle of gee-whiz technology.

“Many, many horrible stories have come out of consumer electronics,” said Cindy Cohn, executive director of the Electronic Frontier Foundation, who is speaking on a CES panel about the future of internet-connected devices. “It’s often about hyping the next thing you can buy and not considering the trade-offs.”

CES runs Tuesday to Friday after two days of media previews. The annual showcase is where big companies and startups unveil and promote their latest gadgets, many of them infused with microphones, cameras and artificial intelligence. Though weighted toward the consumer market, much of what’s on display may also be useful to law enforcement, not to mention prying employers or heavy-handed governments.

Marcus Yang, CEO of the camera startup Amaryllo, said he’s had a difficult time persuading customers to pay more for safeguards such as faster processors to enable end-to-end encryption, when an array of cheaper, but less secure options are available.

CES attendees “want to see technology and something fresh,” Yang said. “They’re only interested in looking at your cameras and what kind of features they have.”

Yang said he’s hopeful that “something is changing this year” after a series of privacy scandals and security breaches has brought attention to the dangers of unfettered surveillance technology. And eventually, he said, regulators are likely to step in with security requirements.

Amazon’s security camera division Ring, which has set up a “Ring House” to show off its home devices, recently had to defend its safety practices following reports of hackers breaking into Ring camera systems and harassing children. It’s also faced criticism from privacy advocates and U.S. lawmakers over its growing partnerships with police. At CES on Monday, the company announced a new “control center” for camera owners to adjust their privacy settings and opt out of police requests for footage.

Ring competitor Wyze Labs, an honoree in the CES 2020 innovation awards, announced a data breach just after Christmas affecting 2.4 million customers. And widely used voice assistants made by Google, Amazon and Apple all came under scrutiny in 2019 for data retention practices that allowed employees and contractors to listen to users’ audio recordings.

There’s been some push back, at least on facial recognition and other surveillance technology from China. Hikvision and iFlytek, two Chinese tech companies that showed off their artificial intelligence at CES 2019, now face U.S. export restrictions because the Trump administration says the technology has been used in the repression of China’s Muslims.

But China isn’t the only place where the lines have blurred between consumer technology and government surveillance operations. Watchful residents of American neighborhoods are increasingly encouraged by Ring to share their doorbell video footage with police detectives. And device-makers are counting on consumers buying into ever-more elaborate forms of computer vision and other AI technology to give them peace of mind.

Camera-maker Arlo this week launched its first wireless floodlight camera, with night vision, a siren, two-way audio to converse with intruders and an ambient light sensor to automatically adjust its brightness. Another company, Sunflower Labs, is using CES to show off its “home drone security” system. If trespassers step onto your lawn, a camera-equipped drone flies out from its resting place to take a look at them and streams the live video to your phone.

Sound like something that might guard the lair of a James Bond villain? CEO Alex Pachikov says it’s actually less intrusive to neighbors than your run-of-the-mill doorbell camera, because it’s only looking down at your own property.

Venture capitalist Rajeev Chand, who is moderating one of those panels, said tech companies are getting better at seeing themselves as custodians, not the owners, of user data, but much more needs to be done.

“We are probably at the first or second inning for how privacy re-shapes the consumer tech industry,” said Chand, a partner and head of research at Wing Venture Capital.

But even as some U.S. policymakers seek to restrict or ban facial recognition, the conference is getting its attendees more accustomed to everyday uses of surveillance technology in commercial and security settings.

Attendees at the gadget show can use their face to pick up their event badges for the first time.

“We’re experimenting with it,” said Gary Shapiro, CEO of the Consumer Technology Association, which organizes CES.

He dismissed privacy concerns, saying that attendees have a choice.

Cohn, of EFF, said she plans to skip the face scanners because she doesn’t know who has control over the images they collect. She said there’s only so much that consumers can do to guard against misuse.

“There is a risk treating this as an individual decision,” she said. “That’s not really fair or right to do to people. We need to fix the policies.”