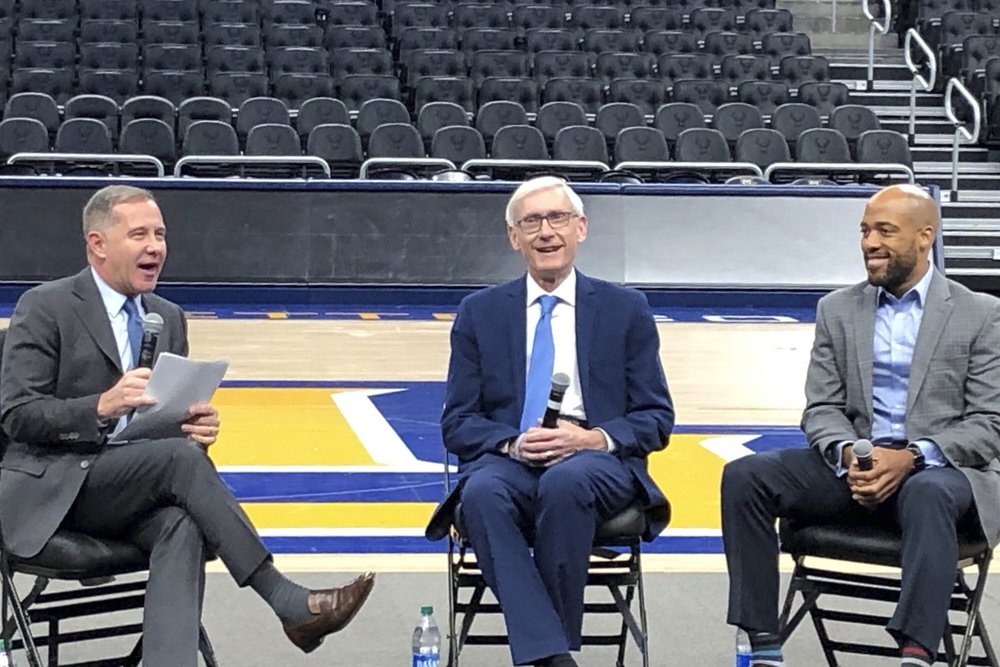 MILWAUKEE (AP) — The head of the Democratic National Convention promised Tuesday that the event in Milwaukee this summer to choose the party’s presidential nominee will be focused more on substance than spectacle as part of a strategy to be more successful in key states such as Wisconsin.

Democrats failed in 2016 to communicate as effectively as they could have in key states, said Joe Solmonese, a longtime Democratic strategist and executive officer for the convention. He spoke to reporters at a media walk-through event Tuesday at the Fiserv Forum, six months before the July convention.

The event and more than 1,000-related events will bring an estimated 50,000 people to Milwaukee, bringing added emphasis to the importance of Wisconsin in the presidential race.

“We are the center of the political universe right now,” said Wisconsin Lt. Gov. Mandela Barnes, a Milwaukee native. He, Democratic Gov. Tony Evers and Treasurer Sarah Godlewski spoke with reporters at the event.

Evers said that in order to win, Democrats need a better turnout in Milwaukee and among young people than in 2016.

“The message is focusing on some really specific issues, making sure we do it in a pragmatic way,” Evers said.

Barnes said Democrats need to “show up everywhere” in Wisconsin, not just Milwaukee, and communicate better with their core supporters than they did during the last presidential campaign.

“That matters,” he said. “People need to know you care about them.”

Having the convention in Milwaukee is more than just a “great party,” it’s also an organizing opportunity to reach thousands of volunteers, said David Bergstein, battleground state communications director for the DNC.

“We can’t take anything for granted,” Bergstein said. “We have to reach out to every possible voter that we can.”

Trump campaign spokeswoman Anna Kelly said holding the convention in Milwaukee will highlight Democratic policies and “only remind Wisconsin voters why they delivered their 10 electoral votes to President Trump in 2016 and why they will do so again in November.”

Wisconsin, along with Michigan and Pennsylvania, are part of the so-called “blue wall” traditional Democratic strength that Trump broke through to win in 2016.

Both parties are pouring millions of dollars into the states, anticipating they’ll be just as critical in the 2020 presidential contest.

Milwaukee’s hosting of the convention has symbolic significance for Democrats, as the party’s 2016 nominee, Hillary Clinton, never campaigned in the state after losing the primary. That was one of the factors cited as why she lost the state to Donald Trump by less than 23,000 votes. Holding the convention in Milwaukee sends a clear signal that Democrats don’t plan to overlook Wisconsin this time around.

Trump was the first Republican presidential candidate to carry the state since 1984. Other than Barack Obama’s two wins, Wisconsin has been decided by less than one percentage point in three of the past five presidential elections.

Solmonese pledged that the convention will reflect what voters in key states like Wisconsin will want to see and hear.

“When we bring the convention to Milwaukee, we’re going to remind the American people of what Democrats stand for,” he said.

Organizers painted Milwaukee as a vibrant, up-and-coming urban center, while giving a nod to its blue-collar roots.

To show off the city, convention organizers provided tours of Milwaukee landmarks and neighborhoods to hundreds of members of the media from around the world who will be covering the event July 13-16.

It will be the first time in more than a century that Democrats will nominate their presidential candidate in a Midwestern city other than Chicago. Instead, the spotlight will shine for a week on a metro area of about 1.6 million people.

The presidential campaigns have been relatively quiet in Wisconsin in recent months, but that’s going to change quickly. Trump has scheduled a Jan. 14 rally in Milwaukee, the same night as a Democratic presidential candidate debate in neighboring Iowa. Presidential voting kicks off in Iowa with its caucuses on Feb. 3. The Wisconsin primary is April 7.

Democrats will nominate their presidential nominee in Milwaukee. Republicans are set to gather in Charlotte, the largest city in battleground North Carolina, on Aug. 24-27.