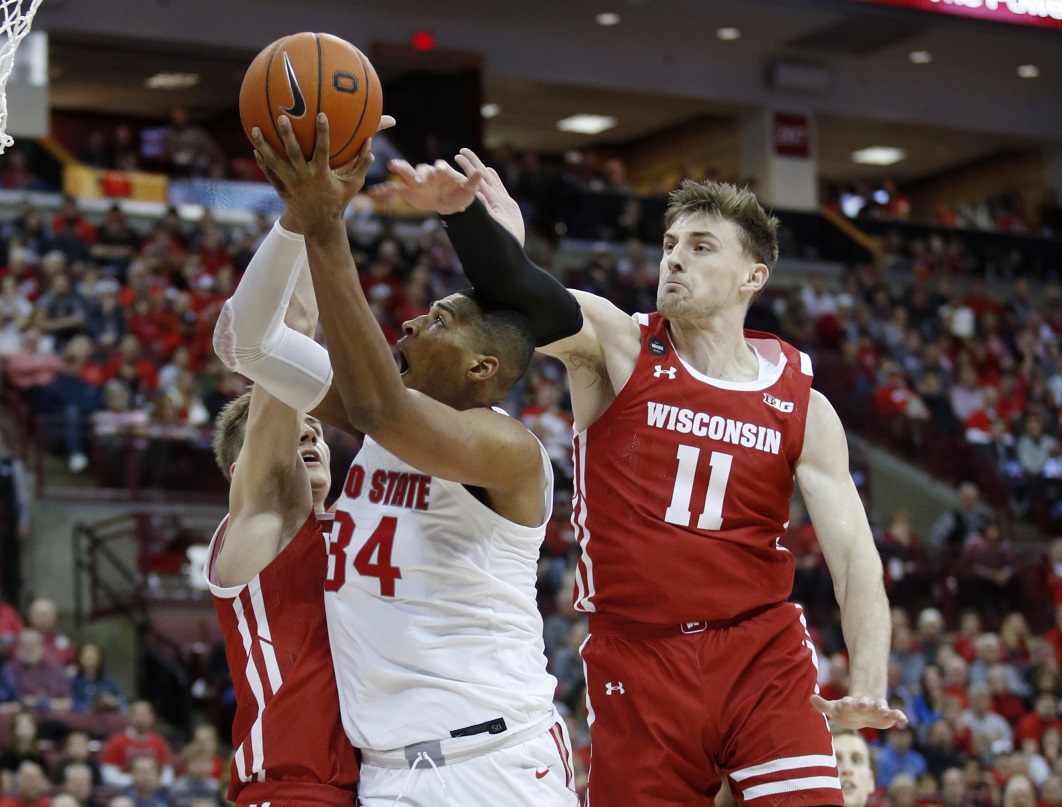 COLUMBUS, Ohio (AP) — Nate Reuver’s jumper finally wrested the lead away from Ohio State with 1:54 left in the game, and the Wisconsin forward hit four free throws in the last 14 seconds to seal a road upset of the No. 5 Buckeyes.

Reuvers scored 17 points and keyed the late rally in a 61-57 win on Friday night in front of a sellout crowd that opened the grueling Big Ten stretch for both teams.

“I think we’ve just gotten a lot better since November,” Reuvers said. “As coach (Greg) Gard has said, we’ve matured a lot more. You can especially see that in the defensive end of the floor. I think we did a really good job hitting the offensive glass, too. That was huge, especially down the stretch.”

La Crosse native Kobe King was the second-leading scorer for the Badgers (9-5, 2-1), going 6-for-7 from the field, dropping 13 points in just 22 minutes. King, who came in having scored a combined four points on 2-for-10 shooting the three games, said his team would not have been able to stay with Ohio State a month ago in a one- or two-possession game.

“They’re one of the best teams in the country, and we watched their games,” King said. “They came out 7-0 and another run at halftime, and just knowing we could fight back and claw back and make it more of a dogfight rather than let them get into rhythm.”

Kaleb Wesson had 22 points and 13 rebounds but missed a 3-pointer with 19 seconds left that would have tied the score 57-57. After that, Ohio State had to start fouling.

“We were looking for the best shot and my teammates found me,” Wesson said of the critical miss. “We thought that was our best shot of that possession.”

Both teams started slowly and struggled from the field throughout. Wisconsin missed its first five shots and finished at 38% from the field, and Ohio State shot 40%.

Wisconsin led by four at halftime of a sloppy, slow game, but Ohio State ripped off back-to-back 3-pointers early in the second half to start a 13-2 run. Wisconsin tied it at 47 with 6:51 to play but wouldn’t grab the lead until Reuvers took charge late.

Ohio State became the second top-5 team in the AP Top 25 to lose this week after No. 4 Oregon fell at Colorado on Thursday night.

Wisconsin: The Badgers stayed in the game despite poor shooting and turnovers and secured a satisfying win to start the long stretch of Big Ten games.

“This was the definition of a team win,” Gard said. “We’ve had to grow and experience some growing pains as we’ve come through November and December. Really proud of the effort. (We) just kept battling and kept finding a way, obviously getting contributions from a lot of different places.”

Ohio State: Playing without 6-foot-9 power forward Kyle Young, who is recovering from appendix surgery, Wesson had to carry the load inside. The Buckeyes missed Young and couldn’t finish off a game they probably should have won.

With two straight losses, Ohio State will slide down the rankings after being as high as No. 2.

“Listen, today’s college game right now they can do everything but tackle you across the lane and not get (a foul) called, so we’ve got to figure out how to play better in those situations where they’re chucking and grabbing and holding.” — Ohio State coach Chris Holtmann on Wesson’s treatment in the paint.

The game was a homecoming for Wisconsin’s Micah Potter, who transferred from Ohio State and had sit out until this semester. He entered the game early to a smattering of boos and finished with four points. Potter’s brother, Noah, is a defensive end for the football Buckeyes.

Wisconsin was 6 for 23 from beyond the 3-point line, and Ohio State was 6 for 20. Only one player on each team hit more than one 3-pointer.