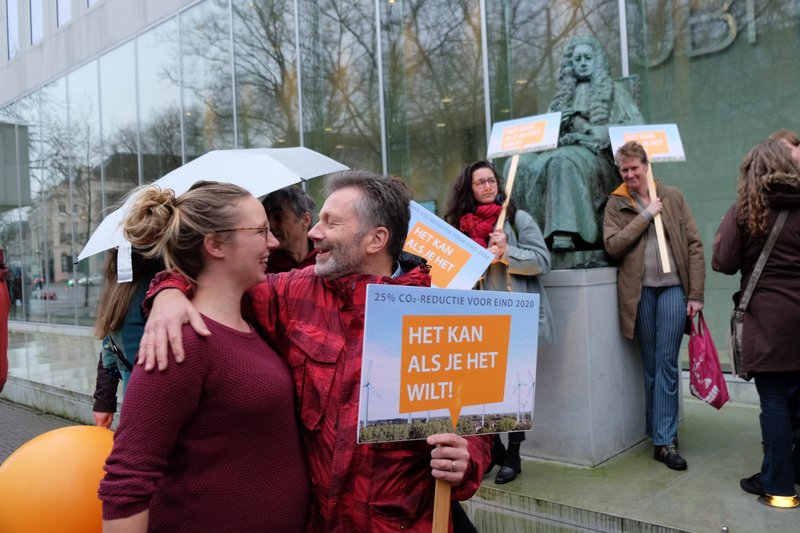 Climate activists gather outside the Supreme Court of the Netherlands, The Hague, on Friday Dec. 20, 2019, ahead of a ruling in a landmark case in which the government was ordered to slash greenhouse gas emissions by 25% by 2020. The government appealed saying that the ruling effectively meant that courts were setting government policy. (AP Photo/Mike Corder)

THE HAGUE, Netherlands (AP) — In a ruling hailed as an “immense victory for climate justice,” the Netherlands’ top court ruled Friday in favor of activists who have for years been seeking legal orders to force the Dutch government into cutting greenhouse gas emissions.

Activists in a packed chamber of the Supreme Court in The Hague erupted into applause and cheers as Presiding Judge Kees Streefkerk rejected the government’s appeal against earlier rulings ordering the government to cut emissions by at least 25% by the end of 2020 from benchmark 1990 levels.

The Supreme Court upheld lower courts’ rulings that protection from the potentially devastating effects of climate change was a human right and that the government has a duty to protect its citizens.

Urgenda, the Dutch climate and sustainability organization that filed the original case, hailed the ruling as “a groundbreaking decision that confirms that individual governments must do their fair share to reduce greenhouse gas emissions.”

“I am extremely happy that the highest court in the Netherlands has confirmed that climate change is a real, severe problem and that government should do what they themselves have declared for more than 10 years is necessary, namely between 25% and 40% reduction of CO2,” Urgenda director Marjan Minnesma told The Associated Press outside the court.

Faiza Oulahsen of Greenpeace in the Netherlands called the ruling “an immense victory for climate justice.”

Reacting to the decision at his weekly press conference, Dutch Prime Minister Mark Rutte said: “I can guarantee we will do everything we can to achieve the goal.”

It is now more than four years since a court in The Hague first ordered the emissions cut in a case brought by Urgenda that spawned similar legal challenges in courts around the world.

The Dutch government appealed that verdict, saying that courts shouldn’t be able to order the government to take action. The government lost the appeal in October 2018, but appealed again, this time to the Supreme Court.

Friday’s ruling rejected that appeal, saying the Dutch government must act “on account of the risk of dangerous climate change that could also have a serious impact on the rights to life and well-being of residents of the Netherlands.”

Damian Rau, one of the plaintiffs that filed the case with Urgenda, said the Supreme Court decision “will set the action we so urgently need into motion and will force governments into taking their responsibility. The judgment is an example to the world that no one is powerless and everybody can make a difference.”

In the meantime, the Netherlands is approaching the target.

A report by the country’s Environmental Assessment Agency published last month estimated that Dutch greenhouse gas emissions in 2020 would be about 23% lower than 1990 levels. The agency said the reduction could be anywhere from 19%-26%.

Minnesma was skeptical about those projections.

“I would say that that is very, very, very optimistic,” she said.

Scientists say global emissions of carbon dioxide and other pollutants have to start falling rapidly as soon as possible to meet the Paris goal of keeping global warming by the end of the century well bellow 2 degrees Celsius (3.6 Fahrenheit), and ideally 1.5 degrees Celsius (2.7 F).

“This landmark ruling provides a clear path forward for concerned individuals in Europe — and around the world — to undertake climate litigation in order to protect human rights, and I pay tribute to the civil society groups which initiated this action,” she wrote in a statement.

Not all legal efforts have been as successful as the Dutch case.

Earlier this year, the Dutch government it announced what it called a climate agreement — a raft of measures intended to cut emissions by 49% by 2030. But it appears unlikely the action already underway will be enough to meet the goal set by the courts in the Urgenda case.

Recently, the government has stepped up actions to limit pollution — including reducing the maximum speed limit on highways from 130 kph (80 mph) to 100 kph (62 mph) beginning early next year. Those efforts, however, have set off repeated protests by farmers and construction workers against government efforts to cut emissions, saying that has hurt their jobs.

Friday’s ruling came a day after Swiss authorities announced that environmental activists had collected enough signatures to force a referendum on setting specific goals for combating climate change in the Swiss constitution.

The original June 2015 ruling came in a case brought by the environmental group Urgenda on behalf of 900 Dutch citizens concerned about government inaction on climate change.

Greenpeace said the government will now have to step up action to cut emissions.

“The closure of coal-fired power stations and reduction of animal factory farming are obvious measures, which the government has been postponing for years,” Oulahsen said. ”Measures now will have to be drastic and the government owes that entirely to itself, because this verdict has not been taken seriously by Prime Minister (Mark) Rutte for four years.”

Minnesma said the problem of climate change is already clearly visible — citing the wildfires raging in Australia as an example — and things like risings seas pose a very real threat to the low-lying Netherlands.

“Our country is to a large extent below sea level, so at a certain point in time if it goes as quickly as it goes right now, you might have a serious problem here,” she said.