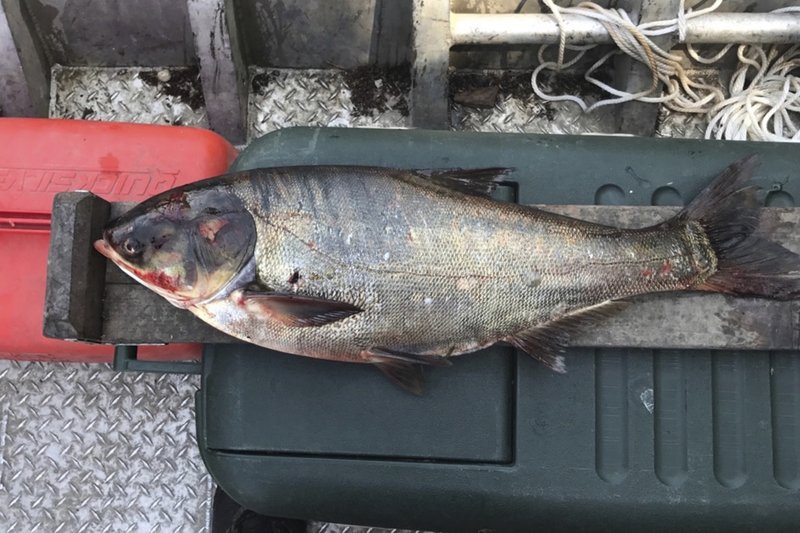 FILE - In this June 22, 2017 file photo provided by the Illinois Department of Natural Resources shows a silver carp that was caught in the Illinois Waterway approximately nine miles away from Lake Michigan. Two invasive silver carp have been caught in southwestern Minnesota, marking the first confirmed discovery of the jumping fish in that area. They were netted this week only about 120 yards north of the Iowa border on the Ocheyedan River in Nobles County. (Illinois Department of Natural Resources via AP File)

MINNEAPOLIS (AP) — Two invasive silver carp have been caught in southwestern Minnesota after essentially sneaking into the state through the back door, marking the first confirmed discovery of the jumping fish in that area.

They were netted only about 120 yards north of the Iowa border on the Ocheyedan River in Nobles County, Nick Frohnauer, invasive fish coordinator for the Minnesota Department of Resources, said Friday. The find is interesting but no reason for panic, he said.

State officials had been concerned that invasive carp could reach southwestern Minnesota via streams in the Missouri River watershed after large numbers were found in in 2012 in northwestern Iowa’s Great Lakes, one of that state’s most popular vacation spots. Officials believe the fish made a dash into those lakes during record flooding in 2011.

But none had been known to have used the back door route into southwestern Minnesota until this week, Frohnauer said. Fortunately, he said, the Ocheyedan River, a small stream, dead ends as an infiltration route south of Worthington at the Lake Bella dam, which fish can’t pass.

“There’s been a lot of high water this year, so that probably helped facilitate their movement up to this point,” he said.

It’s unlikely that there’s an established silver carp population in that area, Frohnauer said. After the first — a 28.8 inch, 9.4 pound male — was caught Tuesday by local fisheries staffers following up on a potential sighting, the DNR dispatched a dedicated invasive species crew with a very large seine to thoroughly net the pool below the dam on Thursday. They found just one more silver carp — a 26 inch, 7.7 pound male — out of hundreds of fish in the net.

So while officials are hopeful that no more silver carp are left there, Frohnauer said they can’t be certain.

Minnesota and Iowa DNR officials have worked together on several projects to keep invasive carp of southwestern Minnesota since they were discovered in the Iowa Great Lakes. They include an electric barrier at the outlet to the lakes that’s been effective in preventing new arrivals, said Kim Bogenschutz, aquatic invasive species coordinator for the Iowa DNR. Very few silver carp are now left in the lakes, she said.

“We truly are finding only maybe one or two fish a year, so it seems to be working as well as we expected,” she said. “No barrier is 100% effective, but we’ll take 95%.”

The only previous discovery of any invasive carp species anywhere in southwestern Minnesota came in 2017, when an angler caught a huge bighead carp in a gravel pit near Redwood Falls that’s within the Minnesota River’s floodplain. That’s about 70 miles northwest from the new discoveries and in a different watershed that empties into the Mississippi River.

Invasive carp species, also known as Asian carp, have been advancing up the Mississippi River system since they escaped from southern fish farms during flooding in the 1970s. The fish are voracious feeders that compete with native species. Silver carp jump when startled, posing a threat to boaters. Individuals are caught occasionally in the Minnesota and Wisconsin portions of the Mississippi, St. Croix and Minnesota rivers, but officials don’t think they’ve gained a permanent foothold there. The lock on the Upper St. Anthony Falls Dam on the Mississippi in downtown Minneapolis was closed in 2015 to protect lakes and streams farther north.