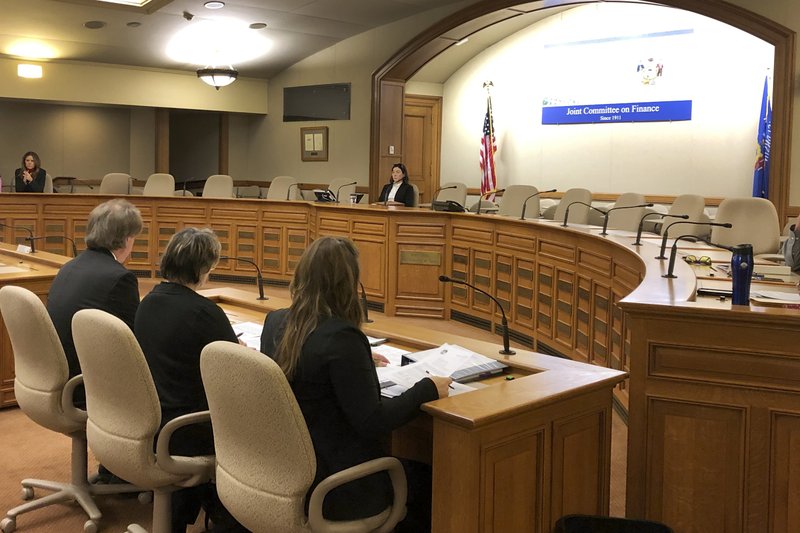 The chairs for 12 Republican members of the Wisconsin Legislature budget committee sit empty after they refuse to convene as Democratic Gov. Tony Evers called for Thursday, Dec. 19, 2019, in Madison, Wisconsin. The bizarre scene came after Evers said state law gave him the power to call the meeting to force the committee to release funding to combat homelessness. (AP Photo/Scott Bauer)

Evers called a meeting of the Legislature’s Republican-controlled budget committee to release $3.7 million in funding to combat homelessness in Wisconsin. He invoked a power rarely, if ever, used by governors to call the legislative committee into session to deal with a specific type of funding request.

But the Republicans who control the panel had said they wouldn’t show up. And they didn’t.

That left the committee’s four Democratic members alone at the table, other than a clerk, while the chairs of the 12 Republican members sat empty. At least one Republican staff member watched from the audience as the Democratic lawmakers questioned members of Evers’ administration about the funding and what programs they would go toward.

“We are here because we’re ready to do this because we’re standing up for people in this state,” said Democratic state Rep. Chris Taylor, of Madison. “I don’t know where my Republican colleagues are. Maybe they are doing their Christmas shopping.”

The roughly 15-minute gathering ended with no votes being taken because there wasn’t a quorum.

Republican Assembly Majority Leader Jim Steineke, speaking to reporters before the would-be meeting, dismissed it as a “dog and pony show.”

Steineke has been a champion for the funding included in a package of bills the Assembly passed earlier this year. They have stalled in the Senate, where some Republicans have objected to the cost.

Steineke accused Evers of not doing enough behind the scenes to convince reluctant Republicans to support the spending.

Evers, in reaction to Steineke, said he called the meeting of the budget committee for the specific purpose of getting the funding released as Steineke wants.

“Jeepers, we have to have the Joint Finance Committee pass it,” Evers told The Associated Press in an interview. “That is how the system works.”

Committee co-chairs Rep. John Nygren, of Marinette, and Sen. Alberta Darling, of River Hills, said Evers didn’t have the authority to call the meeting. They said they already were working with the Department of Administration to schedule a quarterly meeting in early January.

On Thursday, they accused Evers of “playing politics with a very serious problem. … We should be working together on this issue and not trying to score political points.”

Evers’ administration first requested the homelessness funding in July. The proposals would enact recommendations of a state panel that examined homelessness in Wisconsin, a first-of-its kind group in the state created last year as part of a previous effort to address the problem.

The money would go toward efforts to prevent homelessness, get the homeless into more stable housing and bolster grants for homeless shelters.