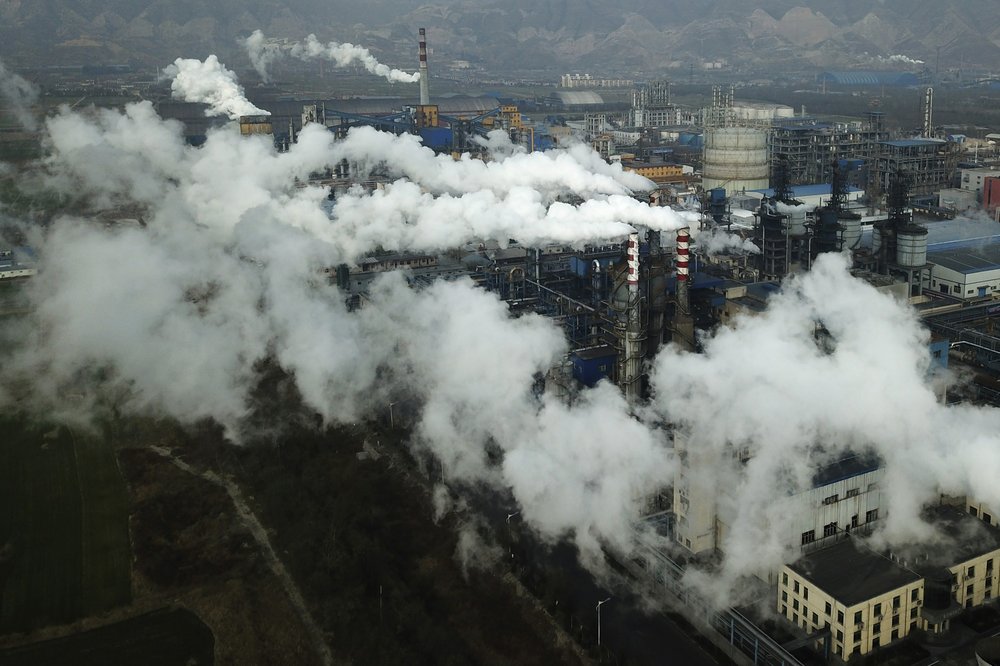 FILE - In this Nov. 28, 2019 file photo, smoke and steam rise from a coal processing plant that produces carbon black, an ingredient in steel manufacturing, in Hejin in central China's Shanxi Province. Scientists say greenhouse gas emissions must start dropping sharply as soon as possible to prevent global temperatures rising more than 1.5 degrees Celsius (2.7 degrees Fahrenheit) by the end of the century. So far, the world is on course for a 3- to 4-degree Celsius rise, with potentially dramatic consequences for many countries. (AP Photo/Sam McNeil, File)

Organizers kept delegates from almost 200 nations in Madrid far beyond Friday’s scheduled close of the two-week talks. In the end, negotiators endorsed a general call for greater efforts to tackle climate change and several measures to help poor countries respond and adapt to its impacts.

U.N. Secretary-General António Guterres said he was “disappointed” by the meeting’s outcome.

“The international community lost an important opportunity to show increased ambition on mitigation, adaptation and finance to tackle the climate crisis,” he said. “We must not give up and I will not give up.”

The final declaration cited an “urgent need” to cut planet-heating greenhouse gases in line with the goals of the landmark 2015 Paris climate change accord. But it fell far short of explicitly demanding that countries submit bolder emissions proposals next year, which developing countries and environmentalists had demanded.

The Paris accord established a common goal of keeping temperature increases below 2 degrees Celsius (3.6 Fahrenheit), ideally 1.5 degrees Celsius (2.7 degrees Fahrenheit) by the end of the century. So far, the world is on course for a 3- to 4-degree Celsius rise, with potentially dramatic consequences for many countries, including rising sea levels and fiercer storms.

After two nights of fractious negotiations, delegates in Madrid decided to defer some of the thorniest issues to the next U.N. climate summit in Glasgow in November.

Chile’s Environment Minister Carolina Schmidt, who chaired the meeting, said she was “sad” no deal had been reached on the rules for international trading in carbon emissions permits.

“We were on the verge,” she said, adding that the goal was to establish markets that are “robust and environmentally sustainable.”

Economists say putting a price on carbon dioxide, the main greenhouse gas, and allowing countries or companies to trade emissions permits, will encourage the shift to away from fossil fuels toward renewable energy.

Some observers welcomed the failure of a deal on carbon markets, though, and the European Union and developing countries had said beforehand that no deal was better than a bad one.

“Thankfully, the weak rules on a market-based mechanism, promoted by Brazil and Australia, that would have undermined efforts to reduce emissions, have been shelved,” said Mohamed Adow, director of Nairobi-based campaign group Power Shift Africa.

Helen Mountford, from the environmental think-tank World Resources Institute, said that “given the high risks of loopholes discussed in Madrid, it was better to delay than accept rules that would have compromised the integrity of the Paris Agreement.”

The talks in Spain took place against a backdrop of growing worldwide concern about climate change. The past year saw large protests in hundreds of cities around the globe and climate activists staged several rallies inside and outside the conference venue to express their frustration at the slow pace of the talks.

The meeting was moved from Chile’s capital Santiago to Madrid at a month’s due to violent protests against the Chilean government, which was under pressure to deliver a positive result.

Delegates made some progress on financial aid for poor countries affected by climate change, despite strong resistance from the United States to any clause holding big polluters liable for the damage caused by their emissions. Countries agreed four years ago to funnel $100 billion per year by 2020 to assist developing nations, but so far nowhere near that amount has been raised.

Under the Paris accord, countries are supposed to regularly review their national emissions reduction targets and increase them if necessary. Last week, the European Union agreed a goal of becoming carbon neutral by mid-century, but the move did little to sway discussions in Madrid about setting more ambitious targets in the medium term, an issue that will be on the agenda again in Glasgow.

The United States will be excluded from much of those talks after President Donald Trump announced the country’s withdrawal from the Paris accord, a process than comes into force Nov. 4, 2020.

Scientists said the longer countries wait to cut emissions, the harder it will be to meet the Paris temperature target.

“The global emissions’ curve needs to bend in 2020,” said Johan Rockström, director of the Potsdam Institute for Climate Impact Research near Berlin.

“Emissions need to be cut half by 2030, and net zero emissions need to be a reality by 2050,” he said. “Achieving this is possible — with existing technologies and within our current economy. The window of opportunity is open, but barely.”