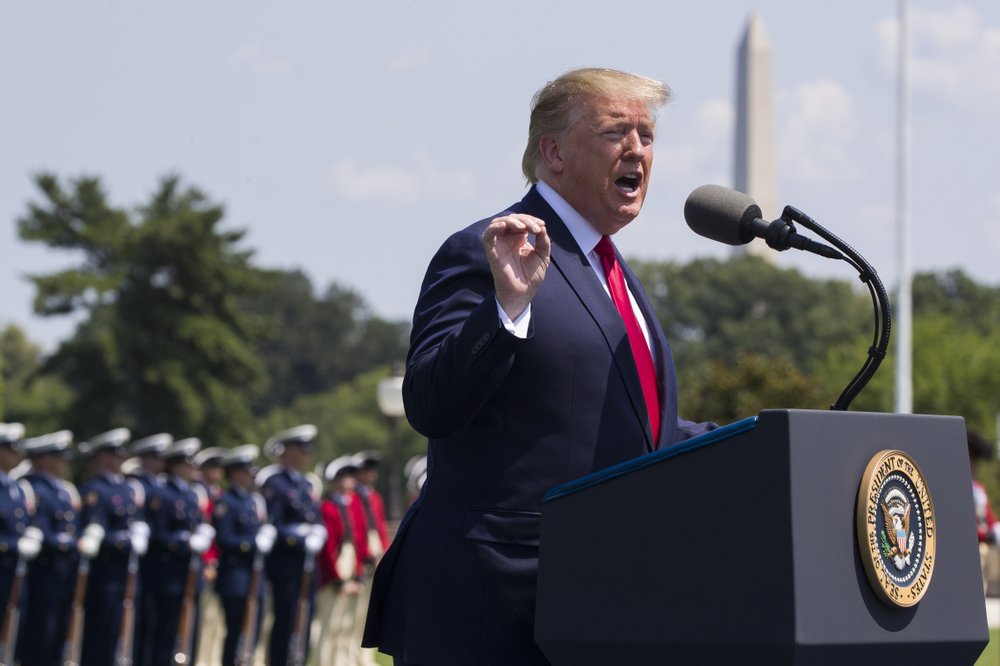 FILE - In this July 25, 2019, file phot, President Donald Trump speaks during a ceremony for new Secretary of Defense Mark Esper at the Pentagon. If there was one day that crystallized all the forces that led to the impeachment investigation of President Donald Trump, it was July 25. That was the day of his phone call with Ukraine’s new leader, pressing him for a political favor. (AP Photo/Alex Brandon, File)

WASHINGTON (AP) — President Donald Trump and House Speaker Nancy Pelosi don’t see eye-to-eye on much these days, but in the throes of impeachment, they’re in lockstep on the desire to close out the year by checking off items on their to-do lists.

As the uncertain politics of the effort to remove Trump from office collide with critical year-end legislative deadlines, Washington, for the first time in recent memory, appears intent on demonstrating its capacity to multitask. Lawmakers and White House officials are eager to project the image that they’ve been focused on anything but the polarizing proceedings that are increasingly consuming their days and nights.

Even President Donald Trump, no stranger to unpredictability and drama, could only marvel at the week of Washington whiplash.

“This has been a wild week,” he said Friday morning as he played host to the president of Paraguay in the Oval Office.

On Friday, as the House Judiciary Committee was taking the historic step of passing articles of impeachment against the president. Trump had counter-programming at the ready, announcing new progress on long-delayed negotiations with China to tame an 18-month trade war.

It was far from the first split-screen moment of the week.

In the span of one hour Tuesday, Pelosi held a press conference to announce articles of impeachment against the president — then swiftly walked down the hall to announce a bipartisan deal to fulfill the president’s top legislative priority of the year, the U.S.-Mexico-Canada Agreement on trade.

A day later, as the House Judiciary Committee took up the impeachment articles, the full House passed a compromise defense spending bill that would provide federal employees with 12 weeks of paid parental leave, a priority of the president’s daughter. The bill also would bring Trump’s long-promised Space Force to life.

The incongruous moments reflect the unease on all sides in Washington about how the polarizing impeachment process will play out politically — and the fact that many voters across the country don’t view impeachment as a high priority. So Democrats and the White House are going all-out to show they can do their day jobs despite the impeachment drama on TV.

Washington is set for more of those moments in the coming week, with the anticipated party-line impeachment vote Wednesday sandwiched between Tuesday’s expected passage of a budget bill and Thursday’s thumbs-up for the USMCA.

For Pelosi, the decision to give the president those victories appeared aimed at trying to protect her caucus against charges — featured prominently in GOP ads aimed at vulnerable Democrats — that their focus on impeachment has distracted from the bread-and-butter issues that voters care about. Democrats maintain that the issues they’ve made progress on are long-held priorities, like the new parental leave policy for federal employees and stronger labor and environmental protections in the USMCA.

“It’s not a coincidence that the USMCA agreement was announced the same morning that the articles of impeachment were introduced,” said Alex Conant, a Republican strategist and partner at Firehouse Strategies, which has been polling how impeachment is playing in crucial battleground states. “I think congressional Democrats in swing districts want to be able to show their constituents that they’ve done more than just impeach the president.”

Conant said he expects to see a concerted effort by moderate Democrats to find areas where they can work with Trump, even while they’re impeaching him.

“It’s counter-intuitive, but impeachment may actually help the president’s legislative agenda,” he said.

Pelosi tied the flurry of legislative activity amid impeachment to the calendar, telling reporters: “It’s just that as we get to the end of a session, there have to be some decisions made. The timetable for impeachment is the timetable of the committees and that came to an end with a hearing yesterday.”

The spurt of bipartisan legislating hasn’t necessarily led to any cooling of political tempers.

At the White House, Trump aides highlighted what they called a “week of action,” aiming to use it as a cudgel against Democrats whom they have accused of doing nothing besides impeachment. Trump’s campaign is already planning to include the developments in new ads promoting the president making good on his 2016 campaign promises while Democrats seek his removal.

“One can make the argument that President Trump has had the best seven-day run of his presidency despite having two articles of impeachment dropped on him, and that is nothing short of remarkable,” said Jason Miller, a staunch supporter of the president who served as communications director of his 2016 campaign.

The Trump narrative conveniently leaves out Democrats’ significant roles in securing many of the week’s achievements.

“As we have said since the Do-Nothing Democrats started this kangaroo court, President Donald J. Trump remains focused on the work of the American people, and this week’s unprecedented accomplishments prove that,” said White House spokesman Judd Deere.

Conant said the White House was intent on making the argument that “you shouldn’t impeach a president who is doing a good job.”