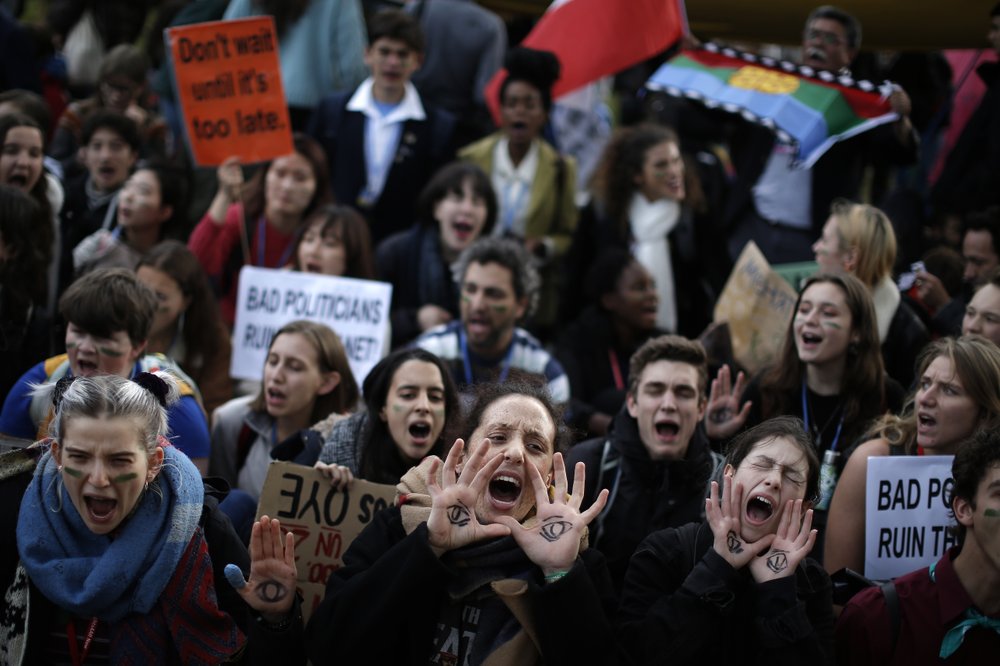 People shout slogans during a march organized by the Fridays for Future international movement of school students outside of the COP25 climate talks congress in Madrid, Spain, Friday, Dec. 13, 2019. The United Nations Secretary-General has warned that failure to tackle global warming could result in economic disaster. (AP Photo/Manu Fernandez)

MADRID (AP) — Officials from almost 200 countries hunkered down for another night of talks late Friday as a U.N. climate meeting in Madrid went into overtime without agreement on key issues.

Chile, which is chairing the talks, said negotiators would continue working on two fronts trying to get deals on aid for poor countries affected by climate change and international carbon markets.

“Today is the day when we must show the world that we are capable of delivering the agreements that are needed to tackle the unprecedented challenge before us,” Chilean official Andrés Landerretche told a roomful of exhausted reporters in the Spanish capital after two weeks of talks.

Landerretche said there was “some optimism” but added that the Paris agreement’s so-called Article 6, which sets the rules for trading in emissions vouchers, “requires more work in order to come to a cleaner text.”

“We’re going to remain in the premises as long as it takes,” said Landerretche. “And that could take well into the night or early hours of tomorrow.”

European Union countries and others have said they would prefer not to finalize rules on international carbon markets rather than to approve ones that could undermine efforts to cut greenhouse gas emissions. Economists say allowing companies and rich countries to invest in carbon-cutting measures such as forest protection in poor countries could become a vital tool for lowering emissions, provided the markets are transparent and there is no double counting.

“We are all looking for a compromise,” Frans Timmermans, the European Commission’s top official in charge of climate issues, said earlier Friday. “But there is no way, no way, we could accept a compromise that jeopardizes environmental integrity. Just no way.”

Landerretche hinted that if the issue isn’t fully resolved, some parts could be deferred till next year.

“Maybe we arrive at a general agreement on Article 6, a principal agreement and leave the technicalities for some inter-sessional period, maybe,” he said. “But it’s not something that we are entertaining at the moment”

Another topic still on the table concerns financial support for poor countries that suffer the effects of climate change, from stronger storms to droughts and sea level rise.

In 2013, countries agreed a tentative system to channel such aid, known as the Warsaw International Mechanism, or WIM. But some rich countries, particularly the United States, have resisted attempts to hold them formally accountable for the impact their greenhouse gas emissions have on the climate, prompting criticism from developing nations.

“The U.S. government is the largest humanitarian donor in the world,” a State Department official said Friday. “The WIM should be a constructive space to catalyze action on the wide range of loss and damage issues.”

“A divisive conversation on blame and liability helps no one,” said the U.S. official, who spoke on condition of anonymity due to the sensitivity of the ongoing negotiations.

President Donald Trump has formally triggered the United States’ withdrawal from the 2015 Paris climate accord, a process that will be completed Nov. 4, 2020 — a day after the next U.S. presidential election.

The move means the United States, the world’s second biggest emitter of greenhouse gases after China, will be excluded from many of the negotiations at next November’s climate talks in Glasgow, Scotland.

As host next year, Britain will have to tackle any issues left over from Madrid and the more daunting task of getting countries to agree to tougher emissions targets, even as it continues to negotiate its exit from the European Union.

Dozens of countries have already said they will submit more ambitious emissions targets next year, though analysts say the commitments made so far aren’t enough.

Scientists have calculated that global emissions have to drop 7.6% annually, starting next year, if the Paris accord’s goal of keeping global warming at 1.5 degrees Celsius (2.7 degrees Fahrenheit) by the end of the century is to be achieved.

Environmental groups staged protests inside and outside the venue in Madrid to express their frustration at the slow pace of the talks.

Vega Minsson, an activist with Fridays for Future Sweden, criticized the lack of progress.

“We’re not here for your entertainment,” she said, adding: “If you want a future, you’d better act to the message we’re preaching and not just listen”

But observers said the protesters’ demands didn’t seem to be having an effect on the negotiations.

“They’re moving at a snail’s pace,” said Helen Mountford of the Washington-based environmental think tank World Resources Institute. “There’s a lot of breakdown in trust among negotiators and, to be frank, quite a bit of self-interest coming into the room when actually we need to globally move forward together to really tackle this climate crisis.”