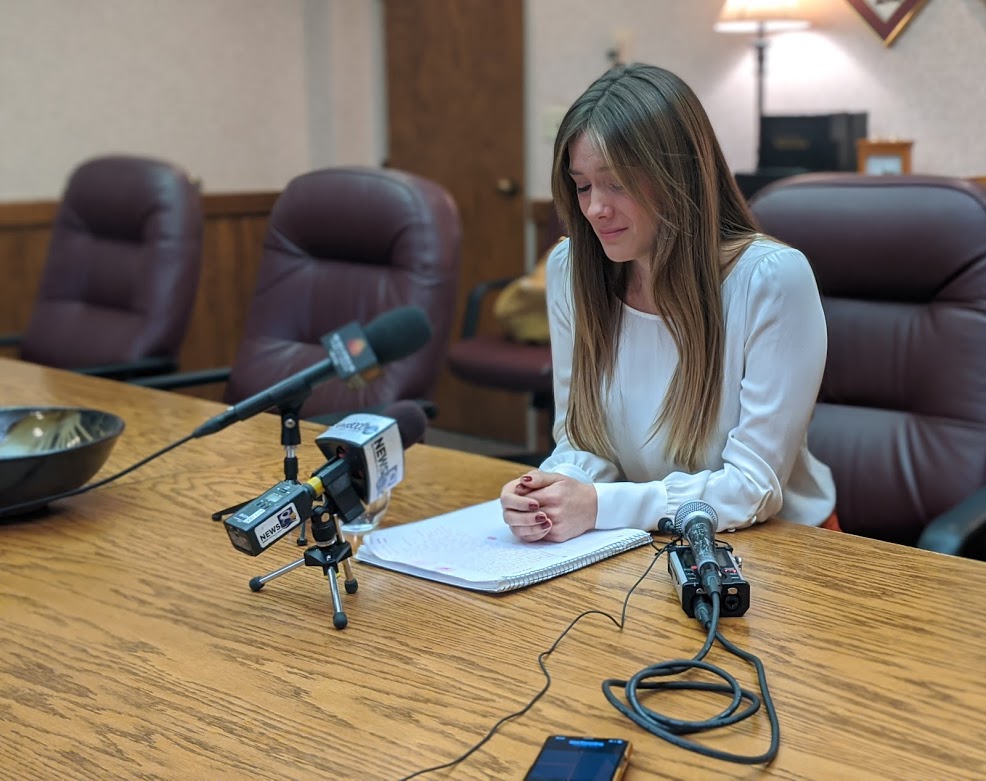 UW-La Crosse student Caycee Bean became emotional while thanking the community for its support during a news conference over sexual harassment by a professor on Thursday, Dec. 12, 2019.

Although the professor she accused of sexual assault is no longer on campus, UW-La Crosse student Caycee Bean said her fight is not over yet.

Bean, 24, said Joel Elgin, chair of the art department, offered her private drawing lessons. During one of those lessons, she said Elgin cornered her in a locked paper closet, asked her to remove some clothing and touched her. It took years for her to come forward about the incident.

Bean filed a report with UW-La Crosse in March of 2019 but said she received no updates from the university. After reaching out to the staff again, she discovered Elgin was instructed not to have contact with her.

“As I walked out of that meeting to my car, I crossed the street with Joel Elgin,” Bean said. “I looked down the street, and I was crossing the street the same time Joel was. I was just so irate and furious.”

“I just wanted absolutely everyone to know about this man because if UWL wasn’t going to get rid of him, I felt like I needed to tell the world,” Bean said.

The university re-opened the investigation after her post. Eventually, Elgin was placed on leave. In a letter to University of Wisconsin-La Crosse students and staff, Chancellor Joe Gow announced Elgin resigned this week.

“Rather than respond to a recently-completed investigative report into sexual harassment allegations, Elgin has indicated he is leaving UWL,” Gow said in the letter.

Elgin’s attorney canceled a meeting Tuesday that was meant to give the professor his legally required opportunity to respond to the conclusions to the investigative report.

Bean said she did not expect Elgin to fight the accusations and was expecting him to resign.

“He knows that he is guilty,” Bean said. “It is kind of a let down in the fact that he potentially still gets all of his benefits. Ultimately, I’m just satisfied that he is not on campus anymore and he hopefully never will be again.”

Elgin’s attorney, Cheryl Gill, called Bean and her supporters “minions,” who “canceled” Elgin’s career with bogus allegations. Bean said she laughed when she heard the statement.

“I refuse to continue to be victimized by Joel and his attorney. His attorney’s responses were meant to hurt and intimidate me and many others who have come forward, and Joel’s response is a textbook case of why so many victims don’t come forward. I am not intimidated by him. You can be heard if you believe in it and you want people to know. You can make a difference.”

Bean encouraged other victims to step forward and embrace the community and student support she received during this process. She noted most of her supporters were strangers who also had similar experiences with Elgin. Their personal investigative tally showed 23 other potential victims. One story was from 17-years-ago.

“I will never be the same,” Bean said. “I just have so much compassion for these women.”

Bean became emotional while recognizing those who stood by her side.

“I just want victims to know that it is not easy,” Bean said. “I’m not going to lie and say that it is easy. People are like, ‘You are so strong. You are a hero,’ and it is uncomfortable for me to hear that because I have struggled a lot. I want to thank the community and especially students for believing in me and supporting me because that is the only thing that has helped me get to this point.

Although Elgin is no longer on Campus, Bean said there is still plenty of work to do. She would like to see changes in how the university handles reports of sexual assaults and more transparency in the process.

“This isn’t over yet,” Bean said. “We need to take a step back and take a hard look at what happened with this case. I was swept under the rug. They did not take my case seriously, and my case was the same. The first report to the second report, it was the same story. So why were there two different outcomes? This is alarming and so many things need to be done.”

With no intent of pressing criminal charges at this time, Bean said she would like to speak directly with those in charge of the initial investigation to address what happened in the case.