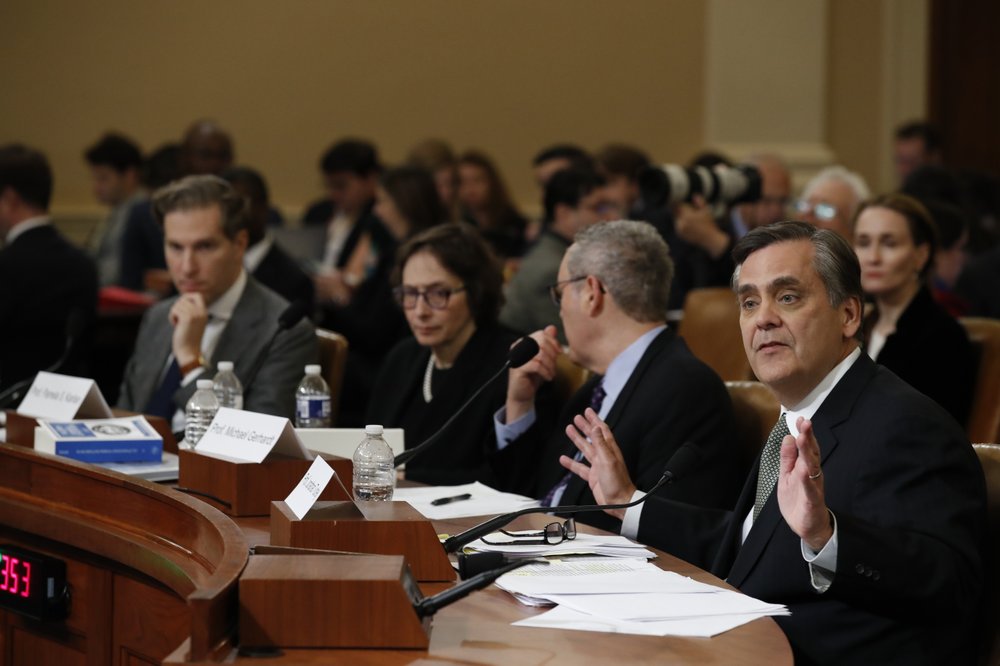 WASHINGTON (AP) — Legal scholar Jonathan Turley told House Democrats that they are rushing the impeachment of President Donald Trump and that they instead could be enlisting the courts to try to help procure the testimony of key figures in Trump’s effort to get Ukraine to investigate political rival Joe Biden.

But that might take months, or longer, and even with a fairly speedy resolution in the courts, Democrats probably would have to delay an impeachment vote well into 2020 — and the heart of the presidential campaign.

The legal system often moves slowly, as shown by several ongoing disputes between Trump and House lawmakers and others, some related to impeachment. He has lost repeatedly in the lower courts, but those rulings have been put on hold pending appeals.

A look at the pending court cases:

The Judiciary Committee has sought the secret grand jury testimony from special counsel Robert Mueller’s investigation for months, even before the formal impeachment inquiry into Trump’s actions in Ukraine began. U.S. District Judge Beryl Howell ordered that the materials be handed over by Oct. 30, but Howell’s order has been put on hold while the Trump administration appeals to the federal appeals court in Washington, D.C. A three-judge panel of that court has scheduled arguments for Jan. 3, and it’s unclear how quickly a ruling would follow. A Supreme Court appeal also would be a possibility, further delaying a final outcome.

Also scheduled for appeals court arguments on Jan. 3 is the Judiciary Committee’s effort to compel testimony from former White House counsel Donald McGahn. The administration has asserted that Congress can’t force the officials closest to the president to testify on Capitol Hill. U.S. District Judge Ketanji Brown Jackson rejected that argument in a ruling late last month and ordered McGahn to appear. The appeals court put the matter on hold while it considers the administration’s appeal. It’s not clear when a ruling might come and the administration could take the issue to the Supreme Court.

Former deputy national security adviser Charles Kupperman is separately asking another federal judge, U.S. District Judge Richard Leon, to rule on whether Kupperman has to comply with a subpoena from the House intelligence committee that was issued as part of its impeachment inquiry. The committee also wanted former national security adviser John Bolton to testify, but he said he wouldn’t appear voluntarily and the committee never subpoenaed him. Kupperman’s case is curious because the subpoena has been withdrawn, and both the House and administration are telling Leon there is nothing left for him to decide. Leon has scheduled arguments for Dec. 10.

Trump is trying to kill subpoenas in three cases that involve investigations of the president’s finances, but are not directly tied to the impeachment inquiry. In all three cases, Trump is trying to prevent banks and accounting firms he employs from turning over tax, banking and other financial records. The Supreme Court could decide as soon as mid-December whether to review any or all of them.

House committees have asked an accounting firm, Mazars USA, and two banks, Deutsche Bank and Capital One, for financial and banking records under the House’s broad powers to legislate and investigate potential wrongdoing. Appellate panels in New York and Washington, DC, have upheld district judges’ orders for the documents to be turned over. They have rejected Trump’s arguments that his personal records are beyond the reach of Congress and that House Democrats are on a fishing expedition meant to embarrass the president.

The third case centers on a subpoena to Mazars from Manhattan District Attorney Cyrus Vance Jr., who wants Trump’s tax returns since 2011 for a wide-ranging criminal grand jury probe. An appeals court panel in New York upheld a judge’s ruling that the subpoena could be enforced.

The cases involving Mazars are on hold at least until the court decides whether to take them up. The administration is seeking a similar reprieve in the case over the bank records. If the justices get involved, nothing is likely to happen before a ruling that probably will come in late June.

If the justices reject the cases, records would have to be produced quickly.