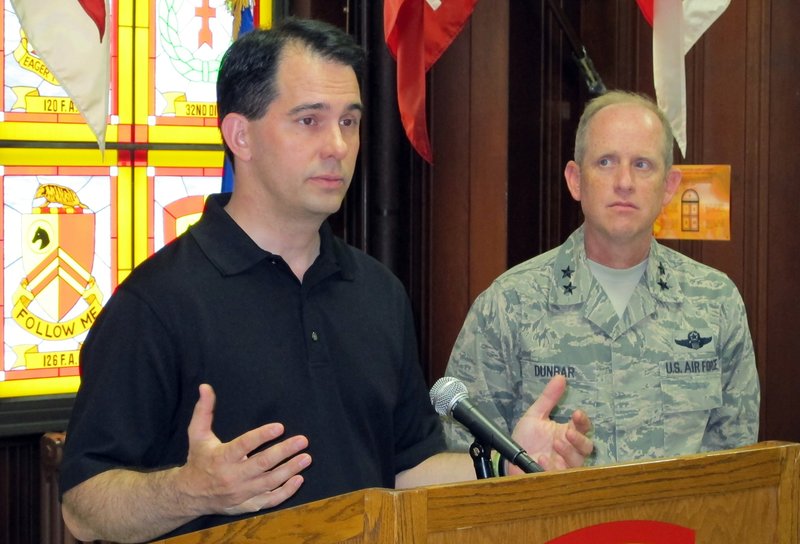 The Guard has been rocked by allegations of sexual assaults since Master Sgt. Jay Ellis notified U.S. Sen. Tammy Baldwin in November 2018 that he was aware of a half-dozen incidents within his 115th Fighter Wing security squadron dating back to 2002 that senior officers brushed aside.

The governor said in his letter that officials from the National Guard Bureau’s Office of Complex Investigations briefed him on their findings on Nov. 25. The investigators plan to meet with Maj. Gen. Donald Dunbar on Saturday. Evers wrote that he will release the findings publicly after investigators meet with Dunbar.

Evers invited the lawmakers to attend their own OCI briefing on Monday, saying he believes it’s important for them to understand the review “due to the gravity of the situation and the report’s findings.” He did not elaborate.

State Senate Majority Leader Scott Fitzgerald asked Dunbar in February for a top-to-bottom review of the Guard’s protocols for reporting, investigating and prosecuting sexual assault. Dunbar responded in March, saying the Guard has “zero tolerance” for sexual assault and harassment.

He detailed how victims can file complaints but didn’t offer any recommendations for improvement. Fitzgerald said then that he wasn’t happy with the response and questioned whether the Guard follows its own policies.

Evers and Baldwin, both Democrats, stepped in and demanded that the National Guard Bureau conduct the review.

Fitzgerald, who is running for Congress in a heavily conservative southeastern Wisconsin district next year, said in a statement Thursday that he wants to hear what OCI has to say about shortfalls in the Guard.

“Clearly changes must be made,” he said. He didn’t elaborate.

The Capital Times newspaper obtained an excerpt from the report in which an investigator told an accuser that the Wisconsin Guard’s response to her case was “an absolute train wreck.”

The case involved a 2015 incident in which a male soldier sexually assaulted a female soldier after their unit was required to sleep in their armory following a night of Guard-sanctioned drinking.

The male soldier was charged with four sexual assault violations of the Wisconsin Code of Military Justice. But the military prosecutor missed several administrative deadlines and eventually failed to advance the case. The alleged perpetrator eventually pleaded guilty to one count of indecent conduct for having consensual sex with the woman.

The investigator said in the report that the bungled court-martial was a result of Guard officials’ incompetence.

Wisconsin National Guard spokesman Joe Trovato declined comment, saying only that no one in the Guard has seen the OCI report or been briefed on it.

Ellis’ complaints also triggered a U.S. Air Force investigation that is ongoing. He alleged in May that his superiors were trying to discharge him on trumped-up medical issues to deny him retirement benefits in retaliation.

Dunbar is investigating those allegations. Meanwhile, Ellis said Thursday that he has won an appeal and will return to regular duty.

The Wisconsin National Guard reached an agreement with the state Justice Department under then-Attorney General Brad Schimel in 2018 that allows the Guard to ask the department to investigate sexual assault complaints.

The Associated Press obtained an email that Schimel’s chief-of-staff, Delanie Breuer, saying the deal was designed to “get the federal National Guard Bureau off the back of (Dunbar).” She wrote that the bureau was stepping into every investigation lacking a neutral third party.

Breuer left the agency after Schimel, a Republican, lost re-election to Democrat Josh Kaul in November 2018.

Johnny Koremenos, who served as Schimel’s spokesman during Schimel’s tenure as attorney general, said Thursday that the Justice Department had been handling cases at the Guard’s request before the agreement was signed, but the National Guard Bureau wanted the arrangement spelled out in writing. He said Breuer’s remark about getting the bureau off Dunbar’s back was made in jest and the agency wasn’t trying to shield Dunbar from federal scrutiny. The F-35 comment was also meant as a joke, he said.

Gillian Drummond, a spokeswoman for Kaul’s office, said the Guard hasn’t asked the agency to investigate any sexual assaults under the agreement.