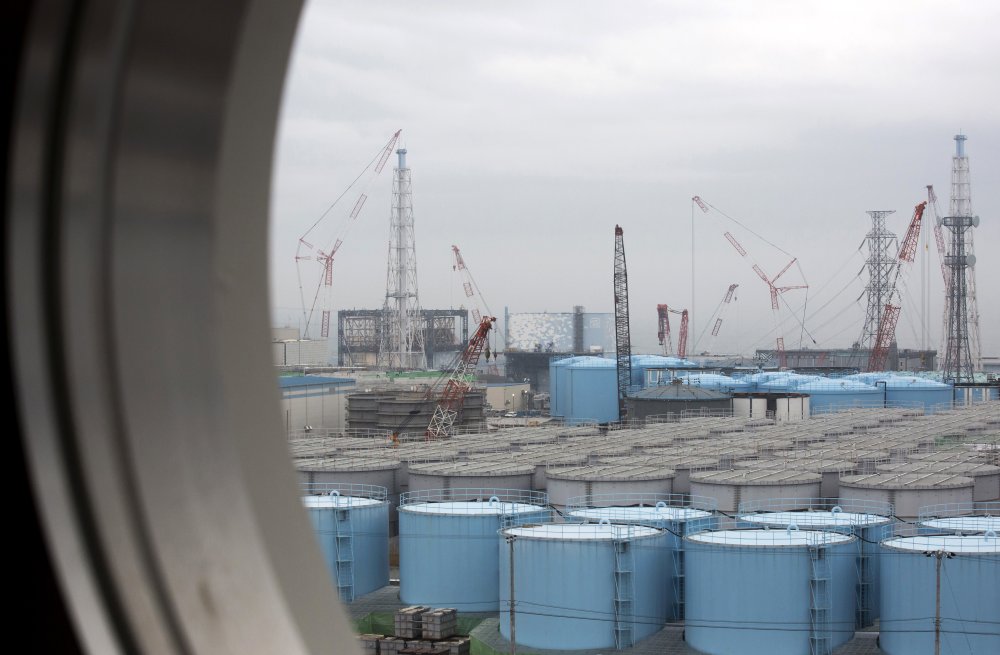 FILE - In this Feb. 23, 2017, file photo, storage tanks for contaminated water are seen through a window of a building during a media tour to the tsunami-crippled Fukushima Dai-ichi nuclear power plant of the Tokyo Electric Power Co. (TEPCO) in Okuma town, Fukushima prefecture. Japan’s economy and industry ministry unveiled a draft revision Monday, Dec. 2, 2019, to its decades-long roadmap to clean up the radioactive mess at the Fukushima nuclear power plant, which was wrecked by a massive earthquake and tsunami in 2011. (Tomohiro Ohsumi/Pool Photo via AP, File)

TOKYO (AP) — Japan’s economy and industry ministry proposed a revision Monday to its decades-long road map to clean up the radioactive mess at the Fukushima nuclear power plant, which was wrecked by a massive earthquake and tsunami in 2011.

Nearly nine years after the accident, the decommissioning of the plant, where three reactors melted, remains largely an uncertainty. The revised road map, to be formally approved later this month, lacks details on how the complex should look at the end but maintains a 30- to 40-year target to finish.

A look at some of the challenges in decommissioning the Fukushima Dai-ichi plant:

By far the toughest challenge is to remove the 800 tons of nuclear fuel in the three reactors that melted, fell from the cores and hardened at the bottom of their primary containment vessels.

In the past two years, plant operator Tokyo Electric Power Co., or TEPCO, has made progress in gathering details mainly from two of the three reactors. In February, a small telescopic robot sent inside Unit 2 showed that small pieces of debris can come off and be lifted out. The milestone step of debris removal is scheduled to begin at Unit 2 by the end of 2021.

Earlier, assessment at Unit 3 was hampered by high radiation and water levels in its primary containment vessel. A robotic survey at Unit 1 was unsuccessful due to extremely high radiation levels.

Experts say a 30- to 40-year completion target for the decommissioning is too optimistic. Some have raised doubts if removing all of the melted fuel is doable and suggest an approach like Chernobyl — contain the reactors and wait until radioactivity naturally decreases.

Together, the three melted reactors have more than 1,500 units of mostly used nuclear fuel rods still inside that must be kept cool in pools of water. They’re among the highest risks at the plant because the pools are uncovered, and loss of water from structural damage or sloshing in the event of another major earthquake could cause fuel rods inside to melt and release massive radiation.

TEPCO started removing the fuel rods from the Unit 3 pool in April 2019 and aims to get all 566 removed by March 2021. Removal of the rods from Units 1 and 2 is to begin in 2023. By 2031, TEPCO also plans to remove thousands at two other units that survived the tsunami to be stored in dry casks on the compound. More than 6,300 fuel rods were in six reactor cooling pools at the time of the accident, and only the Unit 4 pool has been emptied.

The government and TEPCO have been unable to get rid of the more than 1 million tons of radioactive water that has been treated and stored, fearing public repercussions. The utility has managed to cut the volume of water by pumping up groundwater upstream and installing a costly underground “ice wall” around the reactor buildings to keep the water from running into the area.

TEPCO says it has space to store only up to 1.37 million tons until the summer of 2022, raising speculation that the water may be released after the Tokyo Olympics next year. TEPCO and experts say the tanks get in the way of decommissioning work and they need to free up the space to build storage for debris removed and other radioactive materials. The tanks also pose risks if they were to spill out their contents in another major earthquake, tsunami or flood.

Experts say the controlled release of the water into the ocean is the only realistic option, which takes decades. For years, a government panel has been discussing methods amid opposition from fishermen and residents who fear a negative image and potential health impacts.

Japan has yet to develop a plan to dispose of the highly radioactive waste that will come out of the reactors. Under the road map, the government and TEPCO will compile a plan sometime after the first decade of debris removal ending in 2031.

Managing the waste will require new technologies to compact it and reduce its toxicity. TEPCO and the government say they plan to build a temporary storage site for the waste and debris that are removed from the reactors. But finding a site and getting public consent to store the waste would be almost impossible, raising doubts that the cleanup can be finished within 40 years.

Securing a workforce for the decades-long project is a challenge, especially in a country with a rapidly aging and declining population. TEPCO has announced plans to hire foreign workers for the decommissioning under Japan’s new policy allowing more unskilled foreign labor, but it put it on hold following government instructions on careful planning to address concerns about language and safety. Universities are also struggling to attract students in nuclear science, a formerly elite major that has become unpopular since the Fukushima accident.