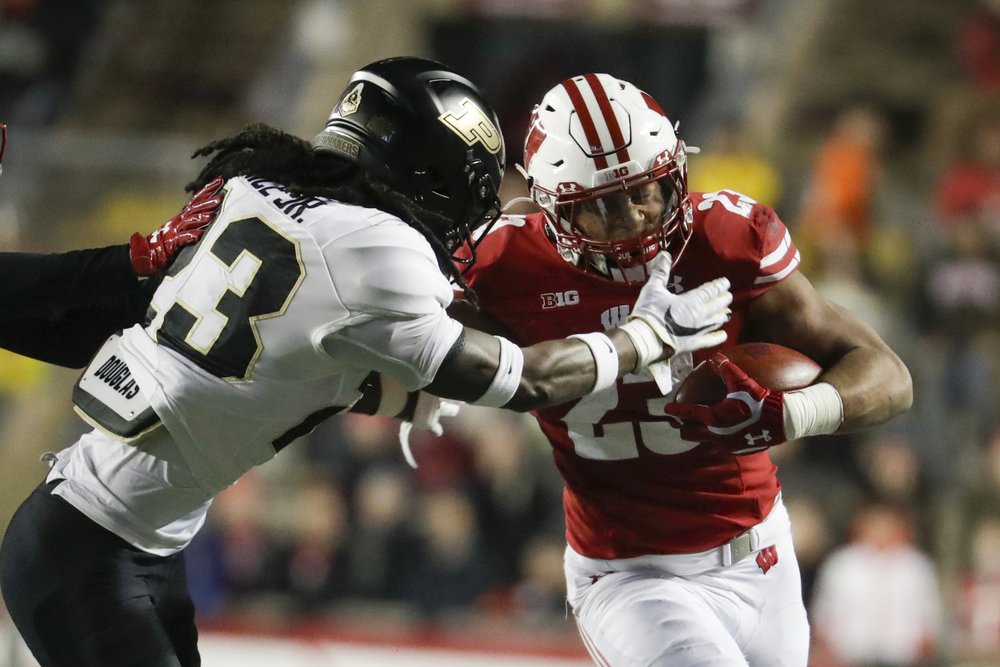 MADISON, Wis. (AP) — Jonathan Taylor will have a major decision to make in a few weeks: To stay or not to stay.

In the meantime, the junior All-America running back is taking the time to appreciate every remaining moment he has in a Wisconsin uniform.

Taylor ran for 222 yards — the 12th time he’s eclipsed the 200-yard mark in his career — and a touchdown and No. 14 Wisconsin beat Purdue 45-24 on Saturday in the Badgers’ final home game of the season.

After the victory, Taylor walked around Camp Randall Stadium and thanked the home fans for their support.

“It was something special, especially because you don’t know. You don’t know if you’re going to be here again,” Taylor said. “So I think that’s the biggest thing is just being appreciative of that opportunity.”

Taylor, now with 5,856 career yards, the most by any player in FBS history through their junior season, will have to decide following the season if he’ll declare for 2020 NFL draft. Taylor said all he’s thinking about is beating Minnesota next week and winning the Big Ten West.

“Next week, we wouldn’t want to have it any other way,” Taylor said. “Big Ten West on the line, rivalry game, (Paul Bunyan’s) Axe, I mean, this is why you come to Wisconsin, for these kind of moments. I’m pretty sure we’re going to have a great week of preparation in order to bring our A game.

Jack Coan completed 15 of 19 passes for 203 yards and two touchdowns against one interception for the Badgers.

The Boilermakers (4-7, 3-5) dropped their seventh straight at Camp Randall Stadium and failed to qualify for a bowl game.

“I think Aidan has done a very good job,” Purdue coach Jeff Brohm said. “… If we give him some time to make throws, he’s going to make them. I thought he did a good job.”

It took the Badgers just over 3 minutes to get on the scoreboard. Aron Cruickshank took a direct snap out of the wildcat formation and capped an eight-play, 75-yard opening drive with a 27-yard rushing touchdown.

After a 28-yard field goal by Purdue’s J.D. Dellinger, Taylor scored from 51 yards out for his FBS-leading 22nd TD of the season.

“We had our hands full but we showed some fight early on,” Brohm said. “We found a way to score some points and take the lead in the second quarter.

Purdue shredded the Wisconsin defense on the ensuing drive for a 27-yard run by Zander Horvath and a 38-yard completion to Milton Wright. The two set up a 7-yard touchdown from O’Connell to Brycen Hopkins that cut it to 14-10 with 14:53 left in the second quarter.

After a fumble by Wisconsin’s A.J. Taylor on the next drive, Hopkins put Purdue ahead 17-14 on a 37-yard completion from receiver Milton Wright on a double-pass play.

“He put it right on the money, maybe a little over my shoulder,” said Hopkins, who had eight catches for 127 yards. “But I got in, I wasn’t downed at the 1-yard line this time. So it was a great job by him.”

The scoring affair continued when Coan hit Jack Dunn for an 18-yard score to put the Badgers back on top for good, 21-17, with 4:18 remaining in the half. Coan later connected with Quintez Cephus for a 29-yard score.

After the Coan-Dunn TD, Jonathan Taylor coughed it up on the following drive, and Derrick Barnes recovered for the Boilermakers, setting up first-and-10 at the Purdue 29. But the Boilermakers failed to capitalize and went three-and-out. Taylor lost another fumble on the day, bringing his season total to four and his career total to 14.

Zach Hintze booted a school-record 62-yard field goal to give the Badgers a 24-17 lead at halftime. Hintze missed the only other field goal attempt of his career, a 62-yarder against Northwestern last season.

“It was surreal,” Hintze said. “I can’t explain it in words, at that moment, how that felt. It was a lot of chaos, a lot of people jumping on me. It was insane.”

Wisconsin’s Collin Wilder was ejected for targeting in the third quarter.

Purdue: The Boilermakers’ streak of bowl game appearances will come to an end. Brohm led Purdue to bowl games in each of his first two seasons at the school.

Wisconsin could gain a little ground in both the AP Top 25 and the College Football Playoff rankings despite entering as a 24 1/2-point favorite against the Boilermakers.