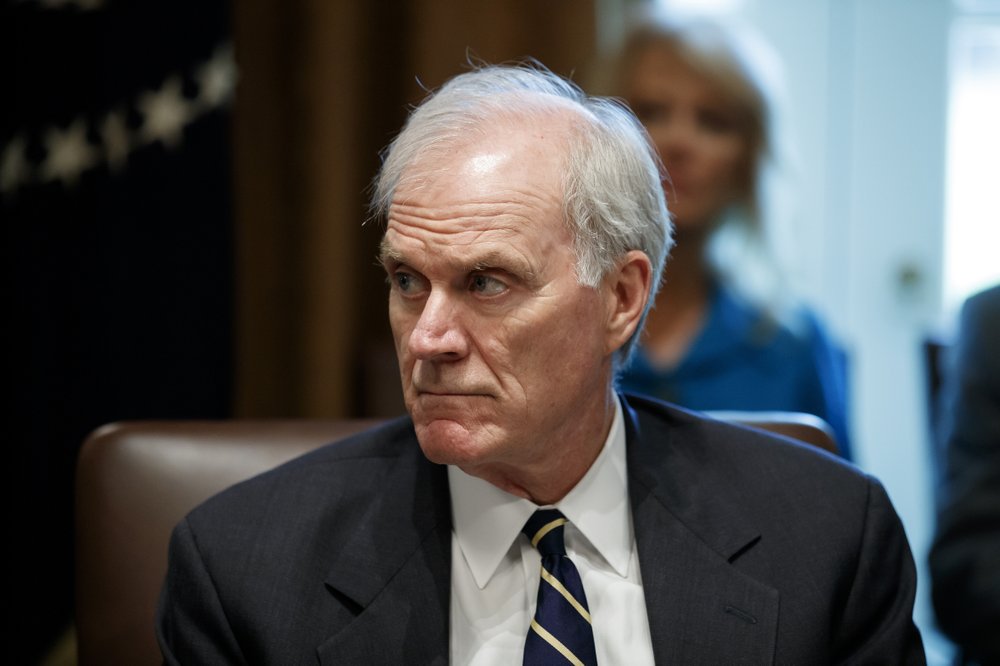 In this July 16, 2019, photo, acting Defense Secretary Richard Spencer listens during a Cabinet meeting in the Cabinet Room of the White House in Washington. Secretary of the U.S. Navy Spencer said Saturday, Nov. 23, he doesn't consider a tweet by President Donald Trump an order and would need a formal order to stop a review of Edward Gallagher, a sailor who could lose his status as a Navy Seal. (AP Photo/Alex Brandon)

HALIFAX, Nova Scotia (AP) — The secretary of the U.S. Navy said Saturday he doesn’t consider a tweet by President Donald Trump an order and would need a formal order to stop a review of a sailor who could lose his status as a Navy SEAL.

“I need a formal order to act,” Navy Secretary Richard Spencer said, and referred to the tweet. “I don’t interpret them as a formal order.”

In one of 49 tweets/retweets by Trump on Thursday, he insisted the Navy “will NOT be taking away Warfighter and Navy SEAL Eddie Gallagher’s Trident Pin,” inserting himself into an ongoing legal review of the sailor’s ability to hold onto the pin that designates him a SEAL.

The Navy on Wednesday notified Chief Petty Officer Edward Gallagher that he will face a review early next month to determine if he should remain on the elite force.

Gallagher was acquitted of a murder charge in the stabbing death of an Islamic State militant captive, but a military jury convicted him of posing with the corpse while in Iraq in 2017. He was then demoted to chief.

Spencer, speaking on the sidelines of the Halifax International Security Forum in Canada, said if the president requests the process to stop, the process stops.

“Good order and discipline is also obeying the orders of the President of the United States,” he said.

Despite the differing views with the president over the appropriate handling of the case, Spencer told reporters that he has not threatened to resign over the issue. But he acknowledged that he serves at the pleasure of the president.

“The president the United States is the commander in chief. He’s involved in every aspect of government and he can make decisions and give orders as appropriate,” he said.

Gallagher’s lawyers have accused the Navy of trying to remove the SEAL designation in retaliation for Trump’s decision last week to restore Gallagher’s rank.

Under the review procedure, a five-person board will convene Dec. 2 behind closed doors. It will include one SEAL officer and four senior enlisted SEALs, according to the two U.S. officials. Gallagher can appear once before the board on Dec. 4 but without his lawyers. He can dispute the evidence given to the board that will include his conviction and call witnesses.

Gallagher can appeal any final decision that will be made by the Naval Personnel Board, which will take into account Green’s input and the board’s recommendations.

Trump’s initial order in Gallagher only referred to restoring his rank, but it did not explicitly pardon the SEAL for any wrongdoing.

Green also notified three SEAL officers who oversaw Gallagher during the deployment — Lt. Cmdr. Robert Breisch, Lt. Jacob Portier and Lt. Thomas MacNeil — that they are also being reviewed, according to the officials.

Removing their Trident pins means they will no longer be SEALs but could remain in the Navy.