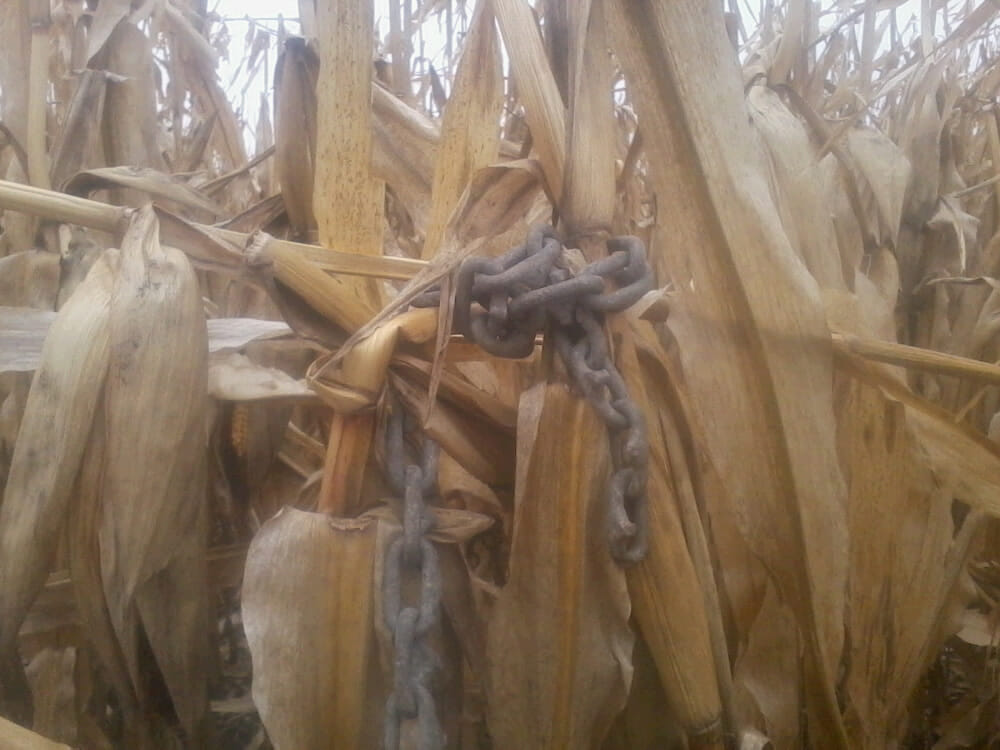 A viral photo put the agriculture community on alert.

This week, Mindy Johnson posted a photo of a cornfield on their farm about 10 miles west of Hutchinson, Minn. The Johnson family runs about 2,000 acres of corn and soybeans. Any other photo would have just been another day in agriculture, but this one showed a chain wrapped around a corn stalk.

Hoping to spread the word on what is being called “ag-terrorism,” the Facebook post has been shared more than 22,000 times.

Mindy’s son, Jake Johnson, said his dad, John, and grandfather, Ryan, were going out to combine the last field of corn this fall when they noticed a chain snagged their corn head.

“They were doing a pass right next to the road, and they kind of thought it was something that fell off the road,” Jake said. “It just seemed like the logical solution right away. They kept going and didn’t think much of it, but then they started finding more spots just like that.”

A 6-food rebar rod was stuck in the ground about a foot and was coming out of the header. Jake said that stopped the slip clutch, so there was only minor damage, but the incidents were cause to call dispatch at the Meeker County Sheriff’s Office.

After walking in the field to find other potential traps, they found another chain and snapped a photo.

“It was pretty obvious it was placed there on purpose,” Jake said.

A detective on the scene took photos and kept the chains and rod as evidence. The Johnson family continued carefully combining searching for other potential problems.

The Johnsons had no idea why their field was targeted and said they have not heard of any similar incidents taking place on neighboring farms.

“It really kind of came out of the blue,” Jake said. “We have no idea who this is.”

The Meeker County Sheriff’s Office could not speculate on a motive or even how long the traps had been set in the field.

Comments on the Facebook post speculated those responsible for the vandalism were protesting anything from noise to pollution and GMOs. Another comment included the post of a Tennessee farmer who had diesel exhaust fluid dumped in the diesel fuel tank of their combine causing damage.

“I didn’t really know this type of vandalism existed beforehand, but then it just comes and smacks you in the face like this, and then you know it exists,” Jake said.

Despite having more stress added to a delayed, wet harvest, the Johnson family has hope that sharing this story will help others.

“We just wanted to really raise awareness for this,” Jake said.  “We want everyone to come together as a farming community and be aware of this as an issue. Be careful, and keep farming.”

The Johnson’s family farm is run by Jake’s grandparents, John and Karen Johnson, parents, Mindy and Ryan Johnson, as well as Jake and his siblings Judah, Joanna and Julia.