Impeachment hearings takeaways: `Everyone was in the loop’ 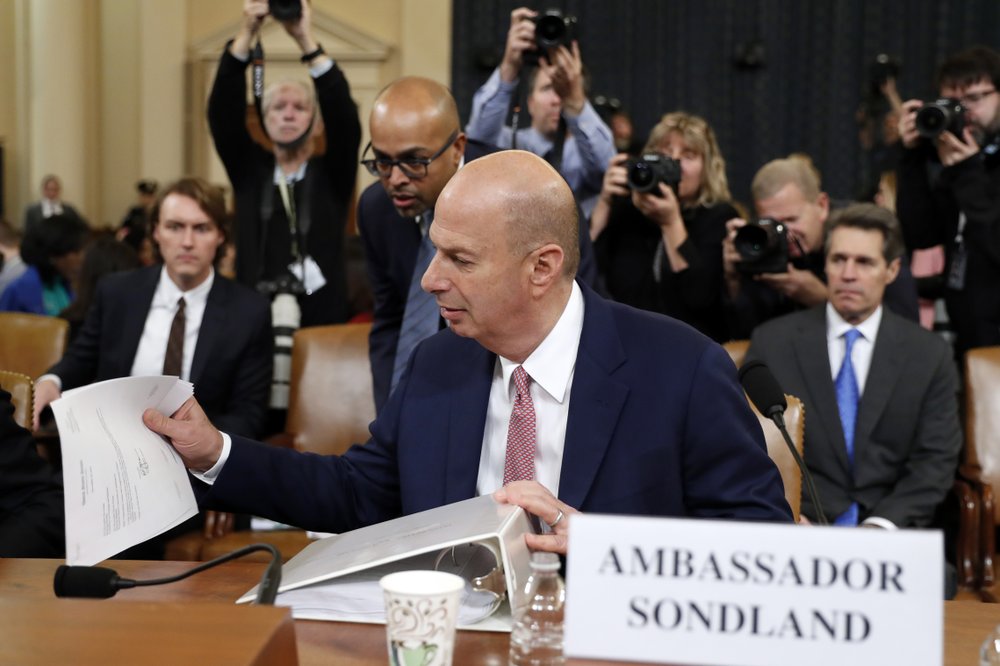 U.S. Ambassador to the European Union Gordon Sondland looks over papers during a break as he testifies before the House Intelligence Committee on Capitol Hill in Washington, Wednesday, Nov. 20, 2019, during a public impeachment hearing of President Donald Trump's efforts to tie U.S. aid for Ukraine to investigations of his political opponents. (AP Photo/Andrew Harnik)

He said “everyone was in the loop” about President Donald Trump’s push for Ukraine to announce investigations into a Ukraine gas company and the 2016 U.S. election.

Sondland was one of the most anticipated witnesses as Democrats are holding an rigorous week of hearings into whether Trump’s dealings with Ukraine are grounds for impeachment.

Sondland told lawmakers that he worked with Rudy Giuliani on Ukraine at Trump’s direction and that he eventually came to believe that military aid for the country was dependent on Ukraine launching the investigations.

Some takeaways from Day 4 of the impeachment inquiry before the House intelligence committee:

Sondland repeatedly referred to a quid pro quo — one thing in return for another — in describing the administration’s dealings with Ukraine.

It was a remarkable spectacle: Trump’s own ambassador using the exact term that the president himself has disavowed. Sondland is hardly a Never-Trumper: He donated $1 million to Trump’s inaugural committee before being named ambassador.

“I know that members of this committee have frequently framed these complicated issues in the form of a simple question: Was there a `quid pro quo?’ As I testified previously, with regard to the requested White House call and White House meeting, the answer is yes,” Sondland said.

The quid pro quo in this case, he said, involved arranging a White House visit for Ukraine’s new president, Volodymyr Zelenskiy, in return for Zelenskiy’s announcing investigations of Burisma, a Ukrainian gas company, and a discredited conspiracy theory that Ukraine had interfered in the 2016 U.S. presidential election. Biden’s son Hunter was a Burisma board member.

That proposed arrangement was pushed by Giuliani, Trump’s personal lawyer, who conveyed Trump’s wishes to multiple administration officials. Sondland said he did not know until September that what was actually desired was an investigation into the Bidens.

The White House pushed back with a statement issued during Sondland’s testimony, saying Sondland didn’t testify that the release of withheld security assistance for Ukraine was tied to Trump’s request for investigations.

‘AT THE EXPRESS DIRECTION’ OF TRUMP

Sondland says he was uncomfortable working with Giuliani, but he did so at the “express direction of the president of the United States.”

“We did not want to work with Mr. Giuliani. Simply put, we played the hand we were dealt,” Sondland said.

Democrats will certainly point to the diplomat’s remarks to undercut any distance that Trump might try to put between him and demands that were placed on Zelenskiy.

Sondland said Giuliani emphasized to him in a subsequent conversation that Trump wanted a public statement from Zelenskiy committing Ukraine to look into corruption issues, including looking into potential interference in the 2016 election and Burisma.

“Mr. Giuliani’s requests were a quid pro quo for arranging a White House visit for President Zelenskiy,” Sondland said. “Mr. Giuliani was expressing the desires of the President of the United States, and we knew that these investigations were important to the President.”

‘EVERYONE WAS IN THE LOOP’

Sondland made clear that this was no rogue effort. Sondland said he was open about Trump’s demand that Ukraine commit to the investigations.

He updated Secretary of State Mike Pompeo and the White House’s acting chief of staff, Mick Mulvaney, telling them that Ukraine’s leader would conduct a “fully transparent investigation” and “turn over every stone.”

Sondland further told Pompeo that he and another American diplomat, Kurt Volker, had negotiated a statement that Zelenskiy could deliver that “will hopefully make the boss happy enough to authorize an invitation” to the White House.

Sondland mentioned Vice President Mike Pence as well, telling him he was concerned that aid to Ukraine had become tied to the issue of investigations. Ukraine’s president raised the issue of security assistance directly with Pence, according to Sondland, and Pence replied that he would speak with Trump about it.

“Everyone was in the loop. It was no secret,” Sondland said.

Marc Short, Pence’s chief of staff, said that Pence never spoke with Sondland “about investigating the Bidens, Burisma, or the conditional release of financial aid to Ukraine based upon potential investigations.”

Sondland’s account made clear his refusal to be a fall guy for the administration’s dealings with Ukraine and underscored that officials across the government were aware of the unconventional dialogue. It could also counter a Republican talking point that Sondland was part of an unsanctioned back channel.

Sondland’s testimony almost certainly advanced the case for impeaching Trump because it moved the effort to get Ukraine to announce an investigation of the Bidens closer to the president.

The testimony also may help House Democrats build a separate impeachment charge against Trump for getting in the way of their investigation, said former independent counsel Kenneth Starr, whose investigation led to Bill Clinton’s impeachment 20 years ago.

“That just got drawn up today thanks to Ambassador Sondland,” Starr said on Fox News. Sondland said the administration refused to give him access to records that might have helped him refresh his memory before testifying.

In a normal criminal case, Trump’s side would try to damage Sondland’s credibility, exploit inconsistencies in his testimony and note that Sondland said the president never personally directed him to dangle a White House meeting in return for announcing the investigation. The effort would be directed at creating a reasonable doubt that would prevent a jury from returning a conviction.

But impeachment takes place in a political arena, not a court of law. Impeachment scholars stress that the standard of proof for impeachment is lower than it is in the courtroom.

Though that would seem to work against Trump, the political nature of impeachment ultimately benefits him. Republicans have been united in defense of Trump and, even if he is impeached, it’s difficult to see Republican-run Senate removing him from office.

Sondland directly tied Trump to the effort to push Ukraine to investigate the Bidens. But Trump is seizing upon a portion of that testimony to make his defense.

While Sondland was testifying, Trump briefly addressed reporters as he left the White House on his way to Texas. Trump normally speaks off-the-cuff, but on Wednesday he read from handwritten notes that appeared to be scrawled in the black Sharpie that the president favors.

Trump launched into a defense, selectively recounting Sondland’s testimony that Trump told him there was no quid pro quo and that he wanted nothing from Ukraine.

“That means it’s all over. This is the final word from the president of the United States. I want nothing,” Trump said, before resorting to his usual description of someone from whom he wanted to distance himself. “I don’t know him very well. I have not spoken to him much. This is not a man I know well. He seems like a nice guy though.”

Trump also disputed what he said was Sondland’s characterization that Trump was in a bad mood during their conversation.

Trump ignored questions from reporters as he boarded the presidential helicopter.

Sondland confirmed a July 26 call with Trump that was revealed by another diplomat last week — and said the White House has confirmed it too.

A U.S. diplomat in Ukraine, David Holmes, told impeachment investigators last week about the phone call between Trump and Sondland. Holmes overheard the cellphone call, conducted a day after Trump pushed Zelenskiy to investigate Democrats, while Holmes was dining with Sondland at a Kiyv restaurant. Holmes said Sondland told Trump that Zelenskiy would conduct the investigations he was seeking and would do anything he wanted. He opened the call by telling Trump that the Zelenskiy “loves your ass.”

Sondland also said that he had “no reason to doubt that this conversation included the subject of investigations,” but said the conversation didn’t strike him as significant.

He said the White House confirmed the call by sharing certain call dates with his attorneys.

Asked about the “loves your ass” comment, Sondland sheepishly acknowledged that he and Trump sometimes used colorful language during their conversations.

“That sounds like something I’d say,” Sondland told the lawyer for committee Democrats. “That’s how President Trump and I communicate, a lot of four-letter words. In this case three letter.”

Giuliani is fighting back on Twitter. And his targets aren’t just Sondland, but also the Republican attorney tasked with questioning witnesses.

After Sondland testified that he learned of Trump’s desire for investigations in Ukraine from Giuliani, the president’s attorney dismissed the ambassador as “speculating based on VERY little contact” with him.

He seemed even more irked with Steve Castor, the GOP’s impeachment counsel. Castor noted during his questioning that Giuliani had business interests in Ukraine and pointed out specifically Giuliani clients Igor Fruman and Lev Parnas, who are facing criminal charges.

Giuliani grumbled that Castor was “picking up Democrat lies, shame.”