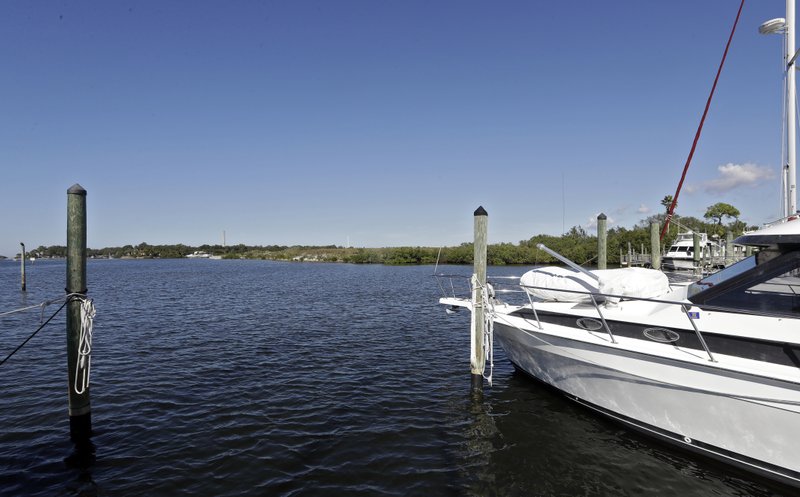 FILE - In this Nov. 30, 2017 photo, boats are shown moored in the Anclote River near the old Stauffer chemical plant site in Tarpon Springs, Fla. Hundreds of the nation's most polluted places are at an increasing risk of spreading contamination beyond their borders by more frequent storms and rising seas. Sixty percent of U.S. Superfund sites are in danger from weather extremes like hurricanes or wildfires, and the Trump administration’s reluctance to acknowledge and plan for climate change is hurting chances of safeguarding them, according to a government watchdog. (AP Photo/Chris O'Meara, File)

WASHINGTON (AP) — At least 60 percent of U.S. Superfund sites are in areas vulnerable to flooding or other worsening disasters of climate change, and the Trump administration’s reluctance to directly acknowledge global warming is deterring efforts to safeguard them, a congressional watchdog agency says.

In a report being released later Monday, the Government Accountability Office called on Environmental Protection Agency Administrator Andrew Wheeler to state directly that dealing with the rising risks of seas, storms or wildfires breaching Superfund sites under climate change is part of the agency’s mission.

The findings emphasize the challenges for government agencies under President Donald Trump, who frequently mocks scientists’ urgent warnings on global heating. Wheeler’s highest-profile public remarks on the matter came in a March CBS interview, when he called global heating “an important change” but not one of the agency’s most pressing problems.

“Most of the threats from climate change are 50 to 75 years out,” Wheeler said then, rejecting conclusions by scientists that damage to climate from fossil fuel emissions already is making natural disasters fiercer and more frequent.

Largely avoiding the words “climate change,” the agency in a formal response rejected the GAO finding that the agency was making a mistake by not spelling out that hardening Superfund sites against a worsening climate was part and parcel of the EPA’s mission.

The EPA believes “the Superfund program’s existing processes and resources adequately ensure that risks and any adverse effects of severe weather events, that may increase in intensity, duration, or frequency, are woven into risk assessments,” assistant EPA administrator Peter Wright wrote the GAO in response.

GAO investigators looked at 1,571 Superfund sites. That number does not include Superfund sites owned by the Defense Department and other federal agencies.

At least 945 of them are in areas that scientists have identified as at greater risk of floods, storm surg e from major hurricanes, wildfires or sea-level rise of 3 feet or more, the GAO says.

Broken down, that includes 783 Superfund sites at greater risk of flooding under climate change, 234 Superfund sites at high or very high risk from wildfires, and 187 sites vulnerable to storm surge from any Category 4 or 5 hurricane, the researchers said.

Senate Democrats asked for the review of how ready EPA’s Superfund program is for climate change.

Sen. Tom Carper of Delaware, the senior Democrat on the Senate’s Environment and Public Works Committee, urged the agency to follow the GAO’s recommendations. “By refusing to address the worsening impacts of climate change – from flooding to wildfires to more frequent extreme weather events – at our nation’s Superfund sites, this EPA is putting public health at risk,” Carper said.

Scientists say that the state’s increasing, and increasingly intense, wildfires are a sign of what the country will be seeing as the climate deteriorates. One major wildfire last year overran the Iron Mountain Superfund site, nearly destroying its water-treatment system and risking a massive, poisonous explosion if flames reached the heart of the mine, the GAO said. Firefighters used special gear to stop the flames. Operators of the Superfund site have since swapped out PCB pipes carrying away the toxic waste for flame-resistant steel ones.

And east of Houston along the San Jacinto River, record rains under Hurricane Harvey in 2017 again dissolved part of a temporary cap on a 40-acre Superfund site, exposing contaminated material. EPA testing there afterward found dioxin at more than 2,000 times the maximum recommended level.

When it comes to climate change, Superfund sites in that coastal part of Texas “are incredibly vulnerable,” said Jackie Young, head of the Texas Health and Environment Alliance advocacy group. While the EPA has since directed that the toxic waste at the damaged site be moved to higher ground, other Superfund sites in the area are still at risk, Young said.

“It’s highly unacceptable that our communities and our first responders” in hurricanes and other disasters “may be exposed to contaminants someone left decades prior,” Young said Friday.

The EPA’s current five-year strategic plan does not include goals or strategies for handling growing risks under climate change, the GAO report said. The most recent previous five-year plan, under the Obama administration, listed addressing climate change as one of four main strategic goals for the agency, and specifically addressed climate change’s impact for Superfund sites, the investigators said.

A GAO review of climate-change-minded planning for keeping the arsenic, mercury, PCBs and other dangerous waste at Superfund sites away from the public and environment found big differences among the 10 EPA regions nationally.

Officials at four EPA regions were able point to changes they’d made at specific Superfund sites to try to adapt to climate change, the report said. At the country’s other EPA regions, however, EPA officials said they had not looked at climate-change projection for flooding or rainfall to gauge risks at Superfund sites, investigators said.

In the EPA region covering Texas and four other south-central states — a region that includes the Gulf of Mexico and Houston and other oil and petrochemical hubs frequently battered by hurricanes — officials “told us that they do not include potential impacts of climate change effects or changes in the frequency of natural disasters into their assessments,” the GAO investigators wrote.

In the Great Lakes states, meanwhile, regional EPA officials “told us that they do not have any formal direction on how to address risks from climate change and are waiting for EPA headquarters to provide information on how to do so,” the report said.