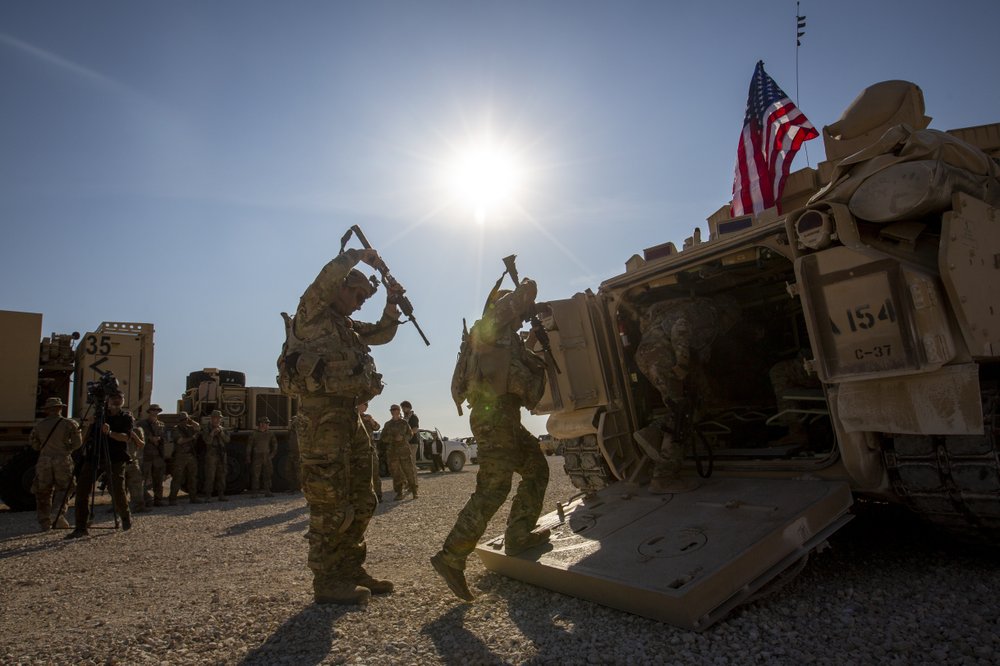 Crewmen enter Bradley fighting vehicles at a US military base at an undisclosed location in Northeastern Syria, Monday, Nov. 11, 2019. The deployment of the mechanized force comes after US troops withdrew from northeastern Syria, making way for a Turkish offensive that began last month. (AP Photo/Darko Bandic)

A BASE IN EASTERN SYRIA (AP) — At a base in eastern Syria, a senior U.S. coalition commander said Monday that American troops who remain in Syria are redeploying to bases, including in some new locations, and working with the Kurdish-led forces to keep up the pressure on the Islamic State militants and prevent the extremists from resurging or breaking out of prisons.

The commander, Air Force Maj. Gen. Eric T. Hill, said even though Bradley armored vehicles have arrived in eastern Syria, the mission’s focus has not changed. He said the “force mix,” including the mechanized armored vehicles deployed in Syria for the first time since the war against IS, has an array of capabilities to deny IS the chance to regroup.

“The mission still continues. And Daesh is trying to resurge wherever they can,” he said, using the Arabic acronym for the group. He said the forces have captured 700 IS fighters since its last territorial holding fell in March. “We’ve destroyed many and war remnants and we continue to do so as we find them.”

Speaking at a remote base in Syria where the Bradleys arrived last week, he said “our primary way that we do that” is through working with the U.S. partners, the Kurdish-led Syrian Democratic Forces.

The deployment of the mechanized force comes after US troops pulled out from northeastern Syria, making way for a Turkish offensive against Kurdish fighters that began last month. Only several miles away from the base, fighting between Turkish-allied fighters and the SDF was ongoing, despite a cease-fire that has so far curbed the Turkish invasion but didn’t end the violence.

Smoke billowed in the distance, visible from across a major highway that has become a de-facto frontier between Turkish-held areas and areas where U.S. troops are going to operate. An SDF official on the scene said Turkish shelling was continuing.

Further north, three car bombs went off Monday in the town of Qamishli, killing at least six people while a priest was shot dead. IS claimed responsibility for the attack that killed the Armenian Catholic priest and his father as they drove from Qamishli to the city of Hassakeh, in a sign that the extremists still have reach.

The U.S. withdrawal from northern Syria was widely criticized, even by allies of President Donald Trump. The Kurdish-led force, deserted by Washington in the face of the threat of a military operation by NATO ally, leaned on the Syrian government and Russia for help. The cease-fire reached in late October left Turkey in control of a stretch of land along the border that is roughly 120 kilometers (70 miles) wide and 30 kilometers (20 miles) deep. But fighting south of that zone continued. Kurdish officials say Turkey is seeking to expand its area of control.

Hill’s stress on the continued partnership with the Kurdish-led forces comes as U.S. troops sent reinforcements to bases in the oil-rich region of eastern Syria.

Trump approved an expanded military mission which he said was to secure an expanse of oil fields across eastern Syria. The directive raised questions about how the troops will operate, particularly in an area where there are Russian-backed Syrian troops, who may try to take back oil facilities.

The decision was a partial win for those who were against the withdrawal from Syria. Pentagon officials said as many as 800 may stay in Syria, down from about 1,200 and including about 200 in a southern garrison.

Hill said while some troops are going home or withdrawing to Iraq, others are redeploying to Qamishli area, Deir el-Zour and Derik, an area where no U.S. bases were before.

First Lt. Jacob Moore said a group of his Bradley armored vehicles were asked to provide security for a U.S. convoy passing through the fighting area, Tal Tamr, setting up a security blockade to allow the forces to pass.

“We were prepared for the worst,” said Moore, who arrived last week in Syria, “but we got the best. There was no fighting when we got there,” Instead, he said, locals were happy to see the new deployment.

In the crowded terrain, U.S. officials say de-conflicting with Russia and Turkey is essential to avoid any friction.

But the reality created on the ground by U.S. withdrawal and the Turkish invasion has made for a tense and at times, surreal terrain, where Russia, Turkish troops patrol together, while Syrian government forces clash with Turkey-backed allies despite a cease-fire brokered by Moscow, a main ally of Damascus. An earlier cease-fire negotiated between Washington and Ankara ensured that the two NATO allies don’t come into confrontation. But it left the Kurdish forces, which were in control of 30 percent of Syria’s territory, pushed away from the borders and reliant on a new political agreement that would protect a five-year experiment in self-administration.

If the U.S. insists its mission is still fighting IS, for the Kurds their priority has now shifted. It is time for the alliance with the U.S. to bear political fruit, said Mustafa Bali, a spokesman for the SDF, who was present at one of the bases.

He said keeping the oil in the hands of his forces was a good card for political negotiations.

“Here in northeast Syria, we are part of the total picture that is dealing with a crisis and requires finding a track for a political resolution,” Bali said. “The presence of the U.S. forces, a military weight, will have a positive role in finding a political way out.”

Pentagon officials have stressed that securing oil facilities was a way to ensure that the Kurdish fighters maintain control of an important source of revenue.

One of the bases visited by journalists Monday was close to oil fields, but there was no way of telling if there was an increase of security around the facilities. While one base was provided with the Bradley vehicles, Apache helicopters had moved in to another, apparently from a base dismantled further north.

U.S. officials say the enhanced presence of Apaches and artillery are a deterrent to any hostile forces in the area.

Adding to the complicated terrain in Syria, Deir el-Zour province is divided between the Kurdish-led forces on one side of the Euphrates River and the Syrian government and their Iranian-backed militias on the other. In February 2018, U.S. forces responded firmly to an attempted advance on Kurdish-held areas by Syrian troops, at the time backed by Russian contractors.

At the base, soldiers said the troop presence also secures other infrastructure, such as water facilities and major highways.

Hill said the continued U.S. presence is also to assist and train Kurdish-led forces, including in securing prisons where over 10,000 IS militants are held. The U.S. does not guard the facilities but helps the Kurdish forces do so.

“One of the missions that we will continue to support with the Syrian Democratic Forces is to contain the prisons and make sure that all the prisoners that are under SDF control remain in those prisons and secure,” he said.