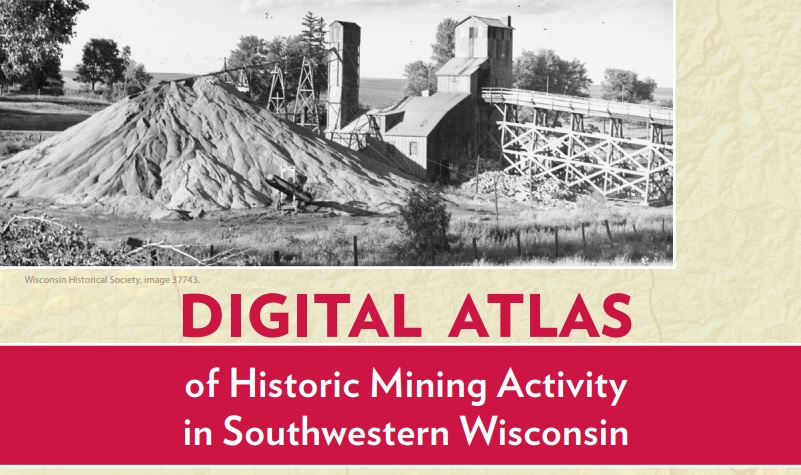 University of Wisconsin soil scientists are attempting to document that history with a digital atlas to highlight areas where lead and zinc residue could threaten plant and human health.

HIGHLAND, Wis. (AP) — The first year he planted soybeans in the 22-acre field at the edge of town, Kurt Menke noticed something odd: His crop came up healthy, but sometime in June the plants in one section all died.

Menke took a sample of soil from the bad area — a couple of acres in the northwest corner of the field — and sent it to a lab for testing.

The results showed zinc at levels thousands of times higher than normal. Zinc is an essential nutrient, but too much of it is poisonous to plants.

Menke’s mother brought the results to Chris Baxter, a soil scientist at UW-Platteville, where she also worked. He took one look and decided to take his own samples.

“Honestly, I didn’t believe them because I thought they were too high,” Baxter told the Wisconsin State Journal.

Baxter’s test confirmed the initial results. Instead of the 10 to 300 parts per million concentration that would be considered normal, Menke’s soil was closer to 15,000 parts per million, meaning zinc made up 1.5 percent of the soil.

Baxter discovered the reason in historic maps: Menke was farming on mine tailings, invisible remnants of an industry that defined this corner of southwestern Wisconsin in the 19th century, but had vanished years before he was born.

“The whole community was surrounded by mines of various sizes,” Baxter said.

Menke, 31, said he really wasn’t aware of the area’s mining history, but was surprised to discover the connection to his crops.

“I knew something was wrong because nothing was growing,” he said. “Looking at the soil, it didn’t look that bad.”

It’s been 40 years since Wisconsin’s last zinc mine closed and nearly two centuries since the Driftless area was the nation’s primary source of lead, but the toxic legacy remains, often undetected, in the soil.

And it isn’t just a problem for farmers.

Where there’s zinc, there’s lead, which even in small amounts can lead to serious health problems, especially in children. And there’s evidence that people are living on top of contaminated soils, said Geoffrey Siemering, a soil researcher at UW-Madison.

“Every town out there is there because of lead mines,” he said. “All the major population centers are sitting right on top of old mine features.”

Now, University of Wisconsin soil scientists are attempting to document that history and highlight areas where lead and zinc residue could threaten plant and human health.

Using archival company records, researchers pinpointed more than 2,000 sites that over time produced more than 600 million tons of ore to create a digital atlas of potentially contaminated sites that farmers, developers and residents can use to inform land-use decisions.

The point is not to scare anyone, but to alert people to the possibility of contamination, said Siemering, who also serves as an outreach specialist for UW-Extension, which earlier this month released the “Digital Atlas of Historic Mining Features in Southwestern Wisconsin.”

Siemering said the idea for the atlas came from a conversation with Baxter, who mentioned he’d been asked to consult on several cases in which farmers were dealing with similar instances of mysterious contamination.

“The mining industry has been gone from this part of the state for many, many years,” Baxter said. “Land changes hands. Older farmers may have known that was a mine there on the back 40. Today they might be renting land or having purchased new land.”

Before it was the dairy state — before it was a state at all — Wisconsin was known for mineral deposits, rich veins of lead and zinc forced by intense heat into crevices in the limestone bedrock and even to the surface, which in the southwestern corner of the state was not scraped clean by glaciers during the last ice age.

The Ho-Chunk and other Native Americans knew where to find chunks of “float lead” sulfide, or galena, which they traded with French fur traders in the 1680s, according to the Wisconsin Historical Society.

As demand for lead — used to make pewter utensils, paint and, primarily, ammunition — grew in the early 1800s, the rich reserves lured settlers up the Mississippi River into what are now Grant, Crawford, Iowa and Lafayette counties, giving rise to communities like Mineral Point, Lead Mine and New Diggings.

By 1829, more than 4,000 miners were producing 13 million pounds of lead each year, and the Driftless Region was the nation’s primary source of lead.

These early pick-and-shovel miners dug shallow “badger holes” and melted the ore in brick furnaces that dotted the landscape.

“The getting was good on the surface initially,” said Tom Hunt, a retired UW-Platteville professor of land resource management. “They scoured the land. It’s really tough to find anything these days.”

As the topmost deposits were depleted, miners began cutting vertical shafts into the limestone to reach deeper reserves, a process made possible by the arrival of Cornish immigrants who brought winches, pumps and other mining technology.

Lead production peaked in the 1840s, but was soon supplanted by zinc, another mineral found in the same underground ore.

Zinc mining required a more sophisticated process, which led to the construction of mills to crush the ore into gravel-size particles and separate out the metals.

The waste rock, or tailings, were piled near the mine sites, often scavenged for roads and buildings and exposed to rains that could wash small pieces of rock — still rich with lead and zinc as well as arsenic and chromium — into the soil or creek beds where they remain today.

As zinc production tailed off during the 20th century, mines closed, and their records were consolidated with the remaining companies. After the last zinc mine closed in 1979, six van loads of records were hauled off to the Wisconsin Geologic and Natural History Survey, which preserved the Wisconsin portion. (The rest were sent to Illinois.)

“It was buried in their database,” Siemering said. “You couldn’t access it.”

Working with Siemering and fellow soil scientist Steve Ventura, a graduate student dug through the records, which they merged with modern land-use data.

The maps show the locations of historic mine features, including bore holes and mine shafts, as well as long-gone rail corridors where ore would have been crushed before being shipped off for smelting, and areas where surface mining took place.

Because they are based on mining records and not soil tests, the maps don’t indicate actual soil contamination but are meant simply as a guide.

“It’s not for people to be terrified, but you should probably be aware of this,” Siemering said. “There’s no safe amount of lead, but higher amounts of lead are worse.”

For example, residents of former mining towns might want to check before planting a garden.

“You might have a nice lawn, and it’s fine. If you’re going to be doing a lot of digging, you might want to check this,” he said, adding, “people eat more soil than they realize.”

Siemering also envisions the atlas as a tool local officials can use when planning new development.

Amy Bares is an engineer for Town and Country Engineering, which does a lot of work in southwest Wisconsin. Bares consulted Siemering’s data when designing a new water tower in Grant County.

“What we were really doing is some due diligence,” she said. “We know that area is rich with mining history, so we wanted to make sure the couple of sites we were most interested in weren’t over a mine shaft.”

Cleaning up contaminated soil by removing or capping it can minimize the risk of exposure, but the costs — up to $100,000 per acre — are out of reach for most people and require environmental permits.

Researchers are focused on more affordable lead abatement tactics that can reduce risk without bankrupting landowners.

Siemering and Baxter have been using part of Menke’s contaminated field in Highland to test ways of restoring productivity, experimenting with methods of depleting the zinc and finding crops that can tolerate higher levels.

The most practical approach is avoidance.

Siemering advises farmers to leave contaminated fields fallow, especially if the area is near homes that could be exposed to dust or runoff, and to minimize the soil’s exposure to livestock. He recommends homeowners maintain healthy lawns and plant deep-rooted shrubs over problem areas to reduce the chance of contact with contaminated soils.

The atlas, Siemering said, should help steer future residential development in the mining district away from areas most likely to be contaminated.

‘Comes at a price’

Aside from a handful of brick furnaces and a stray machine shed, there are few visible remnants of the mining industry.

“There’s not much showing anymore,” said Loren Farrey, who published a guidebook to mining sites of Lafayette County.

The son and grandson of miners, Farrey, who grew up in Lead Mine, decided to tell the story of the industry “because no one else would.”

His book — available from the Mining and Rollo Jamison Museums in Platteville, where visitors can tour an actual mine from 1845 — features historic photos from nearly two dozen mining operations that once existed along the Illinois border between Shullsburg and Benton.

Small road signs mark the stops, though often there’s nothing more to see than a pile of rocks in a pasture or a small mound obscured by trees in the middle of a field.

But if you know what you’re looking for, you can still find the badger holes that pockmark the landscape.

Hunt has several on the 50-acre farm in Ridgeway that he and his wife purchased in 2005. They later learned the land had been settled by James Morrison, an early speculator who mined the surface for lead, and in the 1830s built a furnace to process ore from neighboring prospectors.

A geologist who spent much of his career trying to reduce the environmental impact of mining, Hunt knows how to read a landscape. Standing in one badger hole, a crater-like depression about 20 yards across, he demonstrates how someone shoveled it out nearly two centuries ago.

Though he spent his career reclaiming mine-scarred land, Hunt feels a deep connection to the industry, which he views as “part of the human condition.”

“It’s kind of the edifice of modern civilization,” Hunt said. “Mineral usage has been an index to civilization, good or bad. It all comes at a price.”