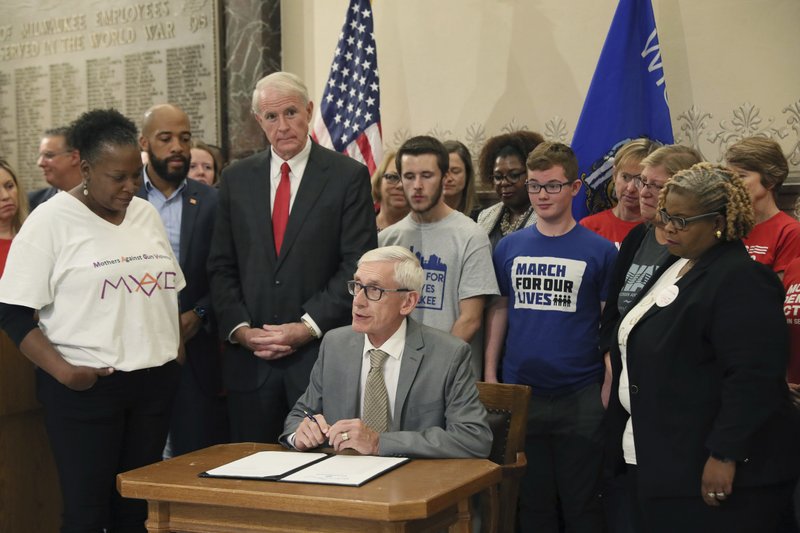 MADISON, Wis. (AP) — Democratic Wisconsin Gov. Tony Evers on Monday called the Legislature into a special session next month to take up a pair of gun control measures that its Republican leaders have been unwilling to debate, accusing them of telling those who support the measures to “go to hell.”

The move won’t force Republicans to debate or vote on the bills, but it will force them to at least convene the special session. That gives Evers and Democrats a chance to put a spotlight on the gun control measures that a Marquette University Law School poll last month said had over 80% support.

Republican leaders said they would not pass the bills, calling them an attack on Second Amendment rights.

“How many times can you go against 80% of the people of the state of Wisconsin and essentially tell them to go to hell and expect to be re-elected?” Evers said of Republicans. “It doesn’t make sense to me.”

Both Assembly Speaker Robin Vos and Senate Majority Leader Scott Fitzgerald, who is also running for Congress, said Republicans would not take up bills they saw as an infringement on constitutional rights to own guns.

“We will not entertain proposals that infringe on our constitutional rights,” Vos said.

Evers wants the Legislature to take up a bill that would require universal background checks for most handgun purchases. He’s also calling on them to vote on a “red flag” bill that would give judges the power to take weapons away from people deemed to be a threat to themselves or others.

The special session, which is scheduled to convene Nov. 7, is the first Evers has called as governor. Special sessions have become increasingly common in Wisconsin, with 74 called since 1961. Former Republican Gov. Scott Walker called nine of them over his eight years in office, most recently in March of 2018 to take up school safety bills.

Unlike Evers, Walker had a Legislature controlled by his own party, which made it easier to get his proposals enacted into law. Walker primarily used special sessions to highlight policy proposals and propose his own solutions. Fifty laws were enacted through special sessions called by Walker.

The dynamic is different for Evers because he must contend with a Republican-controlled Legislature that has shown little appetite for enacting his agenda. Still, by calling the special session, Evers can use power as governor to draw more attention to the bills.

Evers had threatened to call the special session for months, as Republican legislative leaders showed no interest in taking up the bills during their regular session that runs through next spring. He and other Democrats say the gun restrictions are needed in light of the many mass shootings in the U.S.

Under the red flag bill, a judge could seize people’s firearms for up to a year if they pose a threat to themselves or others. Seventeen states and the District of Columbia have passed similar red flag laws.

Under the universal background check bill, the Wisconsin Department of Justice would conduct the checks on purchases made at gun shows, online, auctions and other sales that aren’t covered by the federal law requiring background checks on guns sold through federally licensed dealers.

Like Republicans across the country, the Wisconsin GOP has long insisted that restricting access to guns wouldn’t stop mass shootings and could infringe on Second Amendment rights. They maintain that the answer is to focus on mental health.