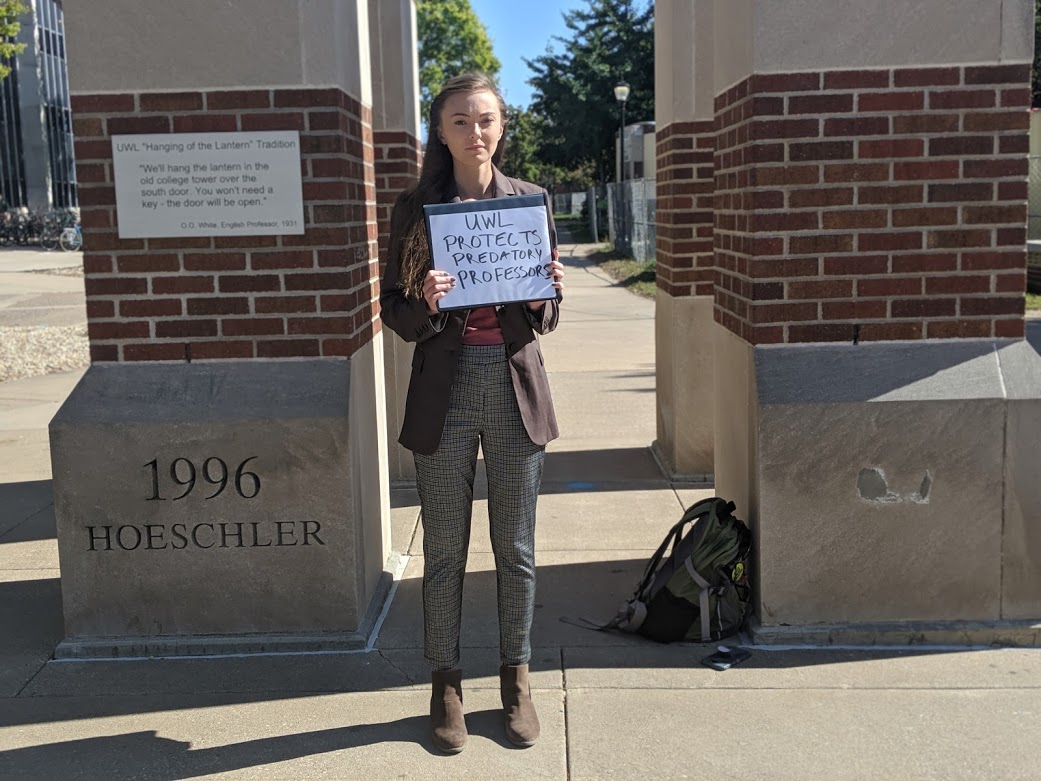 For almost five weeks now, a University of Wisconsin-La Crosse student has been protesting the university’s response to allegations of sexual misconduct.

Every day around noon, Kendra Whelan can be seen at the Hoeschler Tower holding a sign that says, “UWL Protects Predatory Professors.”

“What really inspired me to stand out here was the Chancellor’s real lack of response to the allegations coming public,” Whelan said. “We just got an email saying that sexual misconduct was against UWL policy, and that was the extent of it. When I realized he wasn’t going to turn this into an open conversation about how we can make our policies better and stronger and protect students, I just couldn’t take it anymore.”

In light of the sexual misconduct claims coming from the UW-La Crosse, many students on social media have asked why the university was staying quiet on the issue. Some have even accused faculty and staff of sweeping the issue under the rug.

UW-L Chancellor Joe Gow responded that he did not want to jeopardize the investigation.

“I can’t comment on the status of the investigation,” Gow said. “It would just be speculation on part of the people saying that because they are not involved in them. I do know that investigations are ongoing.”

If someone violates university policy, there is a hearing, and the chancellor is ultimately the judge of what comes out of that hearing, according to Gow.

“So, I have to remain very impartial and wait until it is all concluded,” Gow said.

“I will continue to do this until the chancellor holds an open forum where he just listens to what we have to say,” Whelan said. “I completely understand how he is unable to comment on open and ongoing investigations. It is frustrating, yes, not to have details about what is going on, but students understand that you can’t compromise these investigations.”

Gow says they are working to put information about the university’s sexual misconduct policies with regard acts such as Title IX and the Clery Act online this week.

Whelan claimed students do not know if they can trust the Title IX team on campus if they file a report of sexual assault. She said the reported number of sexual assaults at UWL is too low compared to other universities.

Nearly 550 students signed her online petition. Gow said it is hard to speak generally at an open forum without people referring to specific names or cases.

“It is not possible to talk about those while it is being investigated or adjudicated,” Gow said.

For the most part, Whelan said her actions on campus have received positive feedback.

“I’ve gotten a lot of support from students, faculty, and staff,” Whelan said. “The chancellor is the only person who has been ignoring me.”

Additional actions Whelan would like to see happen on campus include more programming to educate students about sexual assault, adding additional violence prevention staff on campus, and allowing student organizations to become more involved in delivering training to students on these topics.

“To victims and survivors on campus, I just want them to know that I see them, I believe them, and I am here for them, 100 percent,” Whelan said.