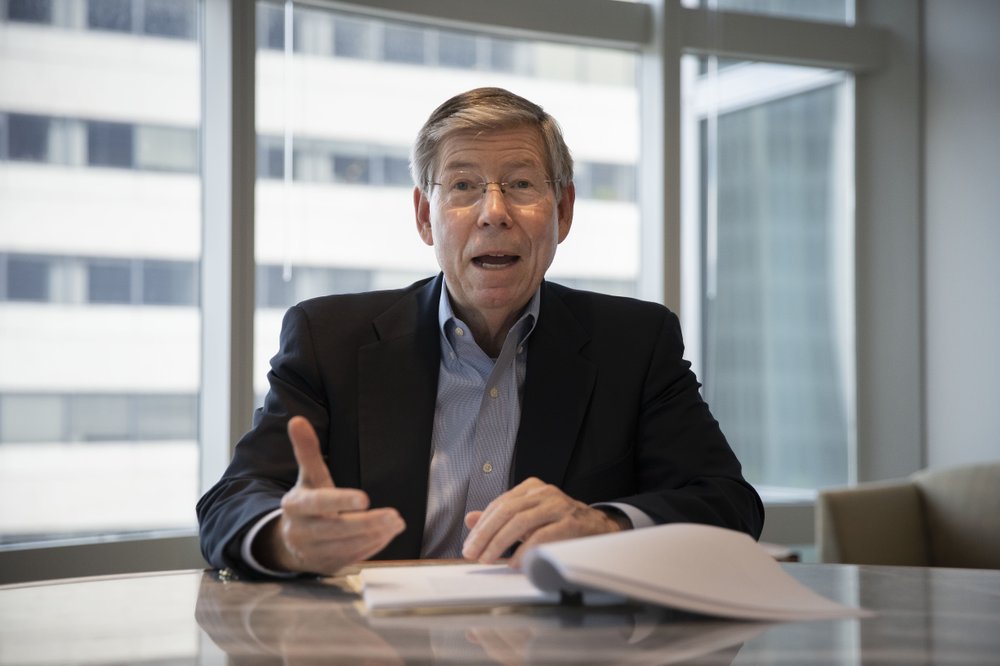 Former Rep. Bill McCollum, R-Fla., now a partner at Dentons, a multinational law firm in Washington, Wednesday, Oct. 2, 2019. McCollum was one of the 14 House impeachment "managers" who presented the case against President Clinton to the Senate in 1998. (AP Photo/Pablo Martinez Monsivais)

WASHINGTON (AP) — Some have regrets. A few can’t talk about it. Others would do it all again.

But the Republicans who carried out President Bill Clinton’s impeachment in 1998 are unanimous in urging caution and restraint as Congress embarks on yet another impeachment struggle, this time over accusations that President Donald Trump pressured Ukrainian President Volodymyr Zelenskiy to investigate his political rival, Joe Biden, and his son.

The impeachment veterans of two decades ago were thrust into a seismic political event that was sober and circus-like at the same time. It opened a new, angry chapter of American politics that strained Washington institutions that were stronger then than now. They urge a pause in the tribalism of the Trump era.

“You’ve got a race to judgment, people apparently have already made up their minds, and I don’t think there’s a lot of openness about this. And I think there should be,” said former Rep. Bill McCollum, R-Fla., one of 14 House impeachment “managers” who presented the case against Clinton to the Senate.

“People ought to wait before they make judgment on whether or not there’s even an impeachable offense out here to be considered until all the facts are on the table,” He added. “That’s not been the case for a number of congressmen on both sides of the aisle that I can see.”

The managers during Clinton’s impeachment were all solidly conservative white men. Most are out of politics. A few are judges. Some do some lobbying, while others have simply retired. The chairman, Henry Hyde of Illinois, died in 2007.

Now a senator, Graham seems to be part of the defense rather than the prosecution

“I have zero problems with this phone call” with Zelenskiy, Graham said on CBS’ “Face The Nation.”

The only Clinton prosecutor remaining in the House is Rep. Jim Sensenbrenner of Wisconsin, a 41-year veteran of Congress who is retiring at the end of next year. He insists charges that Trump abused his office are nowhere near being proven.

In 1998, independent counsel Ken Starr offered up two vanloads of testimony and evidence, effectively dropping the full case for impeachment in Congress’s lap.

“I think that Starr’s report, which said that the president may have committed impeachable offenses, obligated the Judiciary Committee and the House of Representatives to conduct an inquiry to see if that was the case,” Sensenbrenner said in an interview. Congress had removed judges in comparable perjury cases, he said.

History is calling again, this time with accusations that Trump abused his power to help his political fortunes.

Sensenbrenner in July aggressively questioned special counsel Robert Mueller, whose report didn’t find criminal wrongdoing by the president in Russia’s 2016 election interference but spelled out 10 instances in which Trump may have obstructed the probe. Mueller didn’t indict Trump, citing Justice Department guidelines against charging a sitting president. Nor did he say whether impeachment could be a remedy.

“You didn’t use the words ‘impeachable conduct’ like Starr did,” Sensenbrenner told Mueller. “Even the president is innocent until proven guilty.” Mueller said his mandate didn’t include offering opinions on other remedies like impeachment.

McCollum, who left Congress to lose a 2000 Senate campaign but staged a political comeback as Florida’s attorney general, cautions that lots of facts, testimony and evidence have yet to surface. The investigation into Trump’s festering scandal is in its opening stages.

“There are really a lot more questions than there are answers,” McCollum said, adding that so far he sees “just a really weak case.”

Democrats say they already have their “smoking gun,” having obtained the transcript of Trump’s call with Zelenskiy, and accuse Republicans of downplaying a clear-cut abuse of presidential power.

Former Indiana Rep. Lee Hamilton, a Democrat who served in the House from 1965 to 1999 during both the Watergate scandal that brought down President Richard Nixon and the impeachment of Clinton, has said he’d vote to both indict and convict Trump if he were in Congress. Hamilton said he’s “deeply concerned” that more Republicans have not publicly favored impeachment proceedings against Trump or even spoken out against his actions with Russia and Ukraine.

Trump’s call was “certainly egregious conduct” because it was for personal gain, Hamilton said.

“If his conduct is acceptable, then we have lowered the bar on what the office and public trust really means,” Hamilton said. “If we legitimize the kind of behavior that he has exhibited, then our political system is going to be greatly reduced.”

Aside from Graham and Sensenbrenner, Arkansas Gov. Asa Hutchison is the only one of the 1998 impeachment managers remaining in political office. Hutchison was re-elected by a landslide last year.

“The facts have to be developed,” Hutchinson told the Arkansas Democrat Gazette on Saturday, in little-noticed remarks that amount to apostasy in today’s GOP. “The allegations raised should be taken seriously.”

Three of the other former managers are now on the bench. Former Rep. Ed Bryant, R-Tenn., is a federal district court judge, while Charles Canady, R-Fla., and James Rogan, R-Calif., serve on state courts.

Rogan cheerfully responded to an email seeking an interview but said he couldn’t comment.

“I would like to help you, but I fear I am rather hamstrung by our Canons of ethics,” Rogan said. “Not only am I precluded from discussing anything related to the current situation, I am precluded from saying anything that might be interpreted that way (such as giving advice).”

Then there’s former Rep. Bob Inglis, a Republican from South Carolina who wasn’t an impeachment manager but forced a Judiciary Committee discussion on easily the most vulgar accusation levied against Clinton for his conduct. He seemed almost sheepish when encountered in the Capitol recently.

“We made a mistake” impeaching Clinton, Inglis said, adding that the substance of the matter “wasn’t so very consequential.”

“I can say that now, in retrospect — I didn’t think that at the time — but I think that was because I was probably sort of blinded by my dislike of President Clinton, you know, and wanting to stop him,” Inglis said. “So there may be some similarities there in this scenario.”

“If somebody’s the president of the United States and they do something that’s bad enough, then even their own followers are generally going to turn on them,” McCollum said. “And that’s not happened yet. It happened with Nixon. That did not happen with Clinton and that does not appear to me to be likely to be happening with Trump _ at least on the facts that are out there right now.”