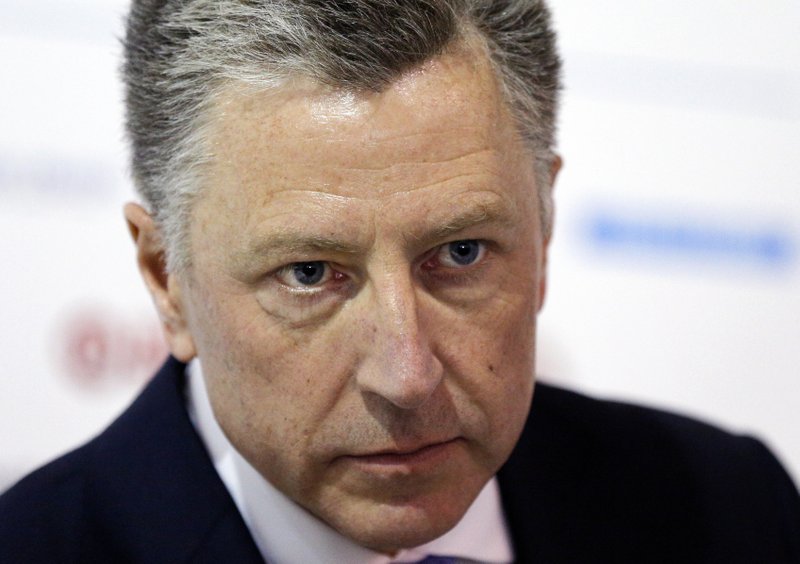 FILE - In this Sept. 15, 2018 file photo, U.S. special representative to Ukraine Kurt Volker attends the 15th Yalta European Strategy (YES) annual meeting entitled "The next generation of everything" at the Mystetsky Arsenal Art Center in Kiev, Ukraine. Volker, a former U.S. ambassador to NATO caught in the middle of a whistleblower complaint over President Donald Trump's dealings with Ukraine, has resigned from his post as special envoy to the Eastern European nation. A U.S. official says Volker told Secretary of State Mike Pompeo on Friday, Sept. 27, 2019, of his decision to leave the job. (AP Photo/Efrem Lukatsky, File)

WASHINGTON (AP) — Top U.S. diplomats encouraged Ukraine’s newly elected president to conduct an investigation linked to Joe Biden’s family in return for a high-profile visit to Washington with President Donald Trump. It soon escalated into what one feared was a “crazy” swap that risked vital U.S. military aid.

That’s according to a cache of text messages released late Thursday by House investigators following a 10-hour interview with one of the diplomats, Kurt Volker, who stepped down as special envoy to Ukraine amid the Democrats’ impeachment inquiry.

The pages lay out the raw contours of a potential quid-pro-quo exchange — Trump gets his political investigation of a top Democratic rival in return for some price to be paid by the new Ukraine leader — now at the heart of the House investigation.

The text messages convey a distinct campaign among the three diplomats, who — apparently against some of their stated better judgment — appear to be trying to help Ukraine reset its relationship with Trump by pushing his interest in investigating his Democratic rival and the 2016 election.

Volker, in a text message on the morning of a planned July 25 phone call between Trump and Ukraine President Volodymyr Zelenskiy, wrote: “Heard from White House — Assuming President Z convinces trump he will investigate / “get to the bottom of what happened” in 2016, we will nail down date for visit to Washington.”

An adviser to the Ukrainian president appeared to go along with the proposal, which entailed investigating Burisma, a Ukrainian gas company where Joe Biden’s son Hunter served on the board.

“Phone call went well,” wrote Andrey Yermak in a text to Volker later that day after the two presidents spoke. Yermak suggested several dates when Trump and Zerenskiy could meet in September.

But all that planning started to unravel when Zelenskiy’s aide tried to lock in a date for the Trump meeting before putting out the statement on the investigations.

“Once we have a date we will call for a press briefing, announcing upcoming visit and outlining vision for the reboot of US-UKRAINE relationship , including among other things Burisma and election meddling in investigations,” Yermak wrote two weeks later.

Volker and the two other diplomats _ William “Bill” Taylor, the charge d’affaires at the U.S. embassy in Ukraine, and Gordon Sondland, the U.S. ambassador to the European Union _ discussed the statement Zelenskiy would issue in support of the investigation. As the negotiations progressed, Sondland said Trump “really wants the deliverable.”

Then, Trump put a hold on $250 million in military assistance to Ukraine, which was depending on the funds as part of its defense against Russia.

“Need to talk with you,” Yermak wrote to Volker.

Taylor, the seasoned top diplomat in the Ukrainian embassy, conveyed his concerns and questioned whether the money was being withheld until Ukraine agreed to Trump’s demand.

“Are we now saying that security assistance and WH meeting are conditioned on investigations?” he wrote.

“This is my nightmare scenario,” Taylor texted his colleagues days later. Taylor said that by withholding the Ukrainian assistance, “we have already shaken their faith in us.”

House Democrats launched the impeachment inquiry over the Ukraine matter after a government whistleblower disclosed Trump’s call with Zelenskiy and the push to have a foreign government interfere in U.S. elections by digging up dirt on Biden.

As a Democratic front-runner, Biden could be Trump’s opponent in the 2020 presidential election. Trump and his lawyer Rudy Giuliani have tried, without evidence, to implicate Biden and his son Hunter in the kind of corruption that has long plagued Ukraine.

Hunter Biden served on the board of Burisma at the same time his father was leading the Obama administration’s diplomatic dealings with Kyiv. Though the timing raised concerns among anti-corruption advocates, there has been no evidence of wrongdoing by either the former vice president or his son.

Trump and Giuliani have also promoted an alternative theory of 2016 election interference, which puts Ukraine, not Russia, at the center, at odds with the 2017 findings of the U.S. intelligence community and special counsel Robert Mueller’s 2019 report.

Trump has said his call with Zelenskiy was “perfect” and portrays the impeachment inquiry as a sham.

The text messages released Thursday show that within a month of the call, Trump has canceled the visit with Zelenskiy, sending the diplomats into an effort to salvage a meeting with Vice President Mike Pence or possibly Secretary of State Mike Pompeo.

What followed was the scramble, and finger-pointing, to apparently fix what had been launched.

Taylor told Sondland he was “counting on you to be right,” and Sondland snapped back, “Bill, I never said I was right.”

Sondland early on had texted that he wanted to get the conversation started with Ukraine “irrespective of the pretext” because he was “worried about the alternative.” Now, he was saying, they have identified the best path forward, and “let’s hope it works.”

Taylor then texted, “As I said on the phone, I think it’s crazy to withhold security assistance for help with a political campaign.”

After a more than four-hour pause, Sondland texted Taylor that he was incorrect, and wrote that Trump “has been crystal clear, no quid pro quos of any kind.”

He also wrote, “I suggest we stop the back and forth by text.”

In releasing the exchanges Thursday, the Democratic committee chairmen said they are “still only a subset of the full body of the materials” provided by Volker, which they hope to make public later.