Not quite enough to pay the fine, but guy in Oktoberfest-La Crosse video shared to Bar Stool doesn’t regret ticket

American Countess will be at Riverside Park on Monday 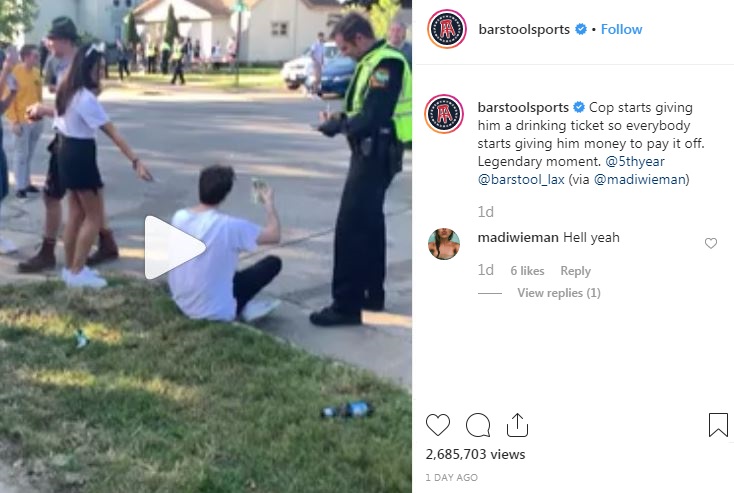 A video of the Milwaukee native getting written, what he said was, a $250 ticket was shared to the 7.1 million followers of Bar Stool Sports.

The original Instagram video from Madi Wieman shows Wood sitting on the curb, while police write him an underage drinking ticket.

“I had no idea who he was,” Wieman said Wednesday on La Crosse Talk PM. “I just saw the cops grab him. I saw one kid run up and hand him money, then more people came up and handed him money and I thought, ‘I have to get this on video.’”

Wood said he didn’t have that much to drink and remembered the entire exchange.

“He walked up to me, grabbed my shirt because he thought I might run,” Wood explained. “I just told him I was underage. Then, some dude ran up to me from across the street and gave me a $20, and I said ‘Oh cool,’ and I was waving the twenty in the air, saying, ‘Thank you,’ to the people across the street.

“People started to take notice. Everyone’s running up, people are throwing me fives and tens — but mostly just like ones and whatnot. But, yeah, it was crazy.”

When it was all said and done, Wood ended up with $78. Not quite enough to pay the fine. Worse yet, Wood turns 21 years old in November.

And, even worse than that, Wood didn’t get his Venmo account (Sean-Wood-20) out there, to try and take advantage of an even bigger community interested in helping pay off his fine.

The money came pouring in. So much so, that King offered to donate all but a case of beer’s worth to the University of Iowa Stead Family Children’s Hospital … all $2.95 million of it, before he just ended the campaign Monday.

Wood didn’t end up trying to take advantage of his situation, albeit one of an unlawful nature, so it was a little bit trickier.

Regardless, he is enjoying his 15 minutes of fame and thinks the $250 fine was worth it.

“A lot of Bar Stool’s posts are really embarrassing,” Wood said. “It was cool to have that particular moment be on Bar Stool.”