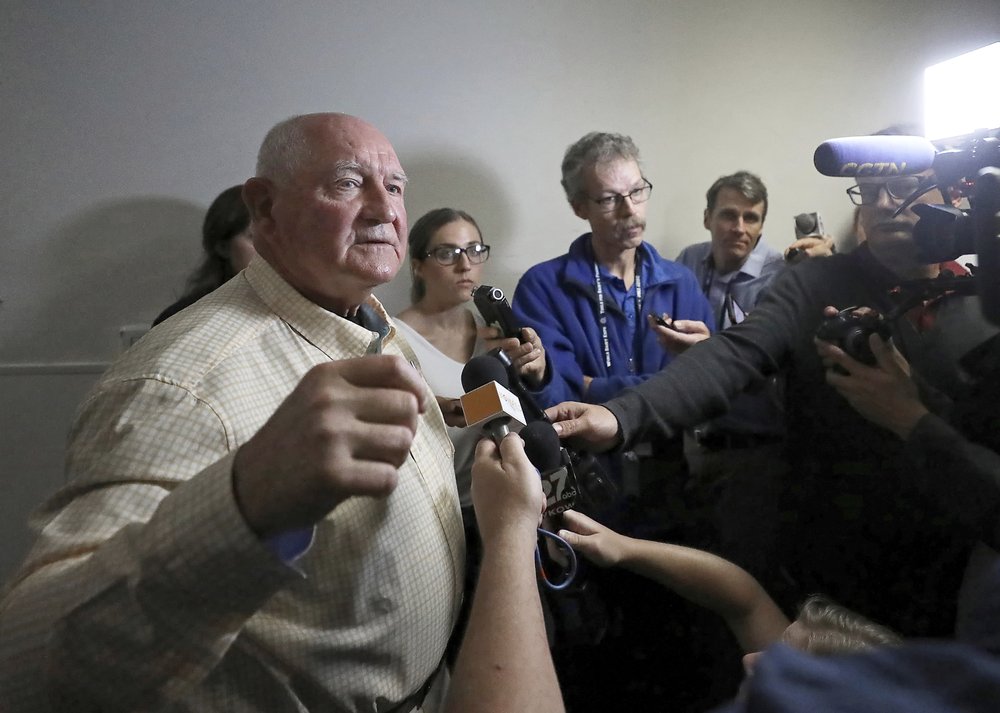 MADISON, Wis. (AP) — President Donald Trump’s agriculture secretary said Tuesday during a stop in Wisconsin that he doesn’t know if the family dairy farm can survive as the industry moves toward a factory farm model.

U.S. Agriculture Secretary Sonny Perdue told reporters following an appearance at the World Dairy Expo in Madison that it’s getting harder for farmers to get by on milking smaller herds.

“In America, the big get bigger and the small go out,” Perdue said. “I don’t think in America we, for any small business, we have a guaranteed income or guaranteed profitability.”

Perdue’s visit comes as Wisconsin dairy farmers are wrestling with a host of problems, including declining milk prices, rising suicide rates, the transition to larger farms with hundreds or thousands of animals and Trump’s international trade wars.

Wisconsin, which touts itself as America’s Dairyland on its license plates, has lost 551 dairy farms in 2019 after losing 638 in 2018 and 465 in 2017, according to data from the state Department of Agriculture, Trade and Consumer Protection. The Legislature’s finance committee voted unanimously last month to spend an additional $200,000 to help struggling farmers deal with depression and mental health problems.

“What I heard today from the secretary of agriculture is there’s no place for me,” Volenec told reporters. “Can I get some support from my state and federal government? I feel like we’re a benefit to society.”

Getting bigger at the expense of smaller operations like his is “not a good way to go,” said Darin Von Ruden, president of Wisconsin Farmers Union and a third generation dairy farmer who runs a 50-cow organic farm.

“Do we want one corporation owning all the food in our country?” he said to reporters.

Perdue said he believes the 2018 farm bill should help farmers stay afloat. The bill reauthorizes agriculture and conservation programs at a rough cost of $400 billion over five years or $867 billion over 10 years. But he warned that small farms will still struggle to compete.

“It’s very difficult on an economy of scale with the capital needs and all the environmental regulations and everything else today to survive milking 40, 50, or 60 or even 100 cows,” he said.

Perdue held a town hall meeting with farmers and agricultural groups to kick off the expo. The former Georgia governor seemed to charm the crowd with his southern accent and jokes about getting swiped in the face by a cow’s tail.

Trump’s administration has long accused China of unfair trade practices and has imposed escalating rounds of tariffs on Chinese imports to press for concessions. The administration alleges that Beijing steals and forces foreign companies to hand over trade secrets, unfairly subsidizes Chinese companies and engages in cyber-theft of intellectual property. China’s countermoves have been especially hard on American farmers because they target U.S. agricultural exports.

According to a September analysis by the U.S. Dairy Export Council, U.S. dairy solids exports to China fell by 43 percent overall in the 11 months starting in July 2018, when China enacted the first round of retaliatory tariffs on U.S. dairy products. About 3.7 billion pounds of U.S. farmers’ milk had to find other markets during that span, the analysis found.

Chinese leaders have said they’re ready to talk but will take whatever steps are necessary to protect their rights.

Perdue responded to Lyon’s question by calling the Chinese “cheaters.”

“They toyed us into being more dependent on their markets than them on us. That’s what the problem has been,” he said. “They can’t expect to come into our country freely and fairly without opening up their markets.”

The secretary said the Trump administration is working to expand other international markets, including targeting India, Thailand, Vietnam, Japan and Malaysia. He said he had expected Congress to ratify a new trade agreement between the United States, Mexico and Canada to replace NAFTA but noted that Washington has been distracted over the last few days, an allusion to impeachment proceedings against Trump ramping up last week.

This story has been updated to correct Perdue’s quote that begins, “In America.” It should end with the word “profitability,” not “probability.”