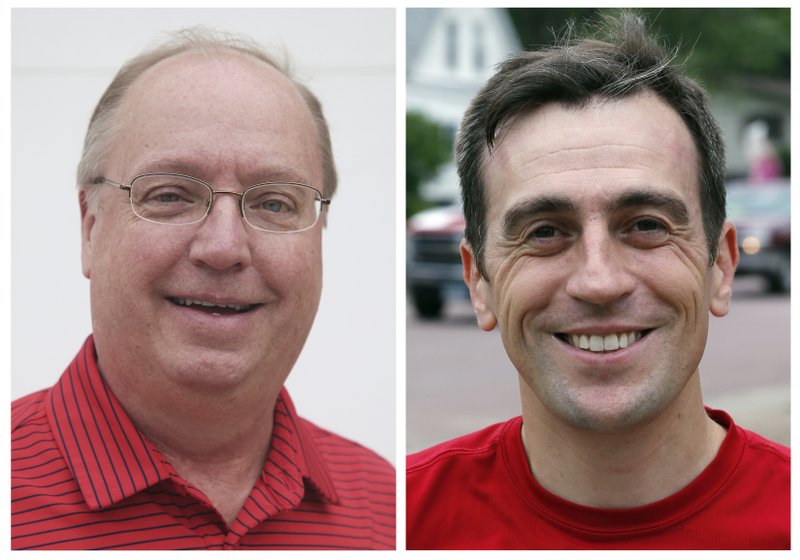 FILE - In this combination of June 10, 2018, file photos are candidates in Minnesota's 1st District Congressional race in the November 2018 election from left, Republican Jim Hagedorn and Democrat Dan Feehan before a parade in Waterville, Minn. Feehan says he's running again for Congress in southern Minnesota after narrowly losing to Republican Hagedorn last year. Hagedorn edged Feehan by about a half-percentage point for the seat Tim Walz left for his successful run for governor. (AP Photo/Jim Mone, File)

Hagedorn edged Feehan by just under a half a percentage point in 2018 — only 1,315 votes — for the seat that Democrat Tim Walz gave up for his successful run for governor. Democratic strategists consider Feehan their best bet to flip a Minnesota district next year.

Feehan, 36, is an Army veteran who joined ROTC after the Sept. 11, 2001, terrorist attacks, served two combat tours in Iraq, taught middle school math and worked in the Obama administration as an acting assistant secretary of defense. He lives in North Mankato with his wife and two young sons.

Hagedorn aligned himself tightly with President Donald Trump during his campaign and has loyally stood by the president since then. Hagedorn, whose father, Tom Hagedorn, once represented some of the same territory in Congress, formerly worked as aide to GOP Rep. Arlan Stangeland and in congressional liaison positions at the Treasury Department. He won the seat last year on his fourth try in a district that Trump carried by 15 points in 2016.

Feehan depicted Hagedorn in his announcement as a lobbyist turned Washington politician.

“Real patriotism means rooting out the corruption in Washington,” Feehan said in a digital ad posted Tuesday. “The drug companies, Wall Street, Big Oil — they own Washington. Then politicians like Jim Hagedorn sell us out and put the screws to hardworking people here. Hagedorn spent his life in Washington, as lobbyist and a partisan operator. He looks out for them, not us.”

It remains to be seen how the impeachment fight in Washington will play out in the congressional elections. It could drive Democratic turnout higher or it could mobilize the president’s conservative base, or both. Another unknown is how the contentious Democratic presidential nomination contest with its ideological splits might affect down ballot races in the general election.

Trump campaigned for Hagedorn in 2018, appearing at a rally in Rochester, and Hagedorn has already expressed excitement about Trump’s rally in Minneapolis on Oct. 10. At a town hall meeting in La Crescent on Monday, Hagedorn condemned the impeachment inquiry as unfounded and politically reckless, Minnesota Public Radio reported.

Feehan’s press release and video did not mention Trump. While he expressed concern in an interview with the Star Tribune of Minneapolis that the impeachment inquiry will distract from policy issues such as health care and the farm economy, he also said Hagedorn isn’t taking the issue seriously.

Hagedorn’s wife, Minnesota GOP chairwoman Jennifer Carnahan, said voters have already rejected Freehan “and his socialist, far-left policies.” She faulted him for his support for universal health care and abortion rights. While she faulted Feehan for spending his college years and much of his career in the “swamp” of Washington, she didn’t mention that Hagedorn did, too.

“Feehan would be better suited in returning to the swamp where he spent 20 years than another failed attempt at pushing his progressive policies in Southern Minnesota,” Carnahan said in a statement.