Hader tagged in 9th, Brews lose in 10; trail Cards by 1 and Braun, Cain are out 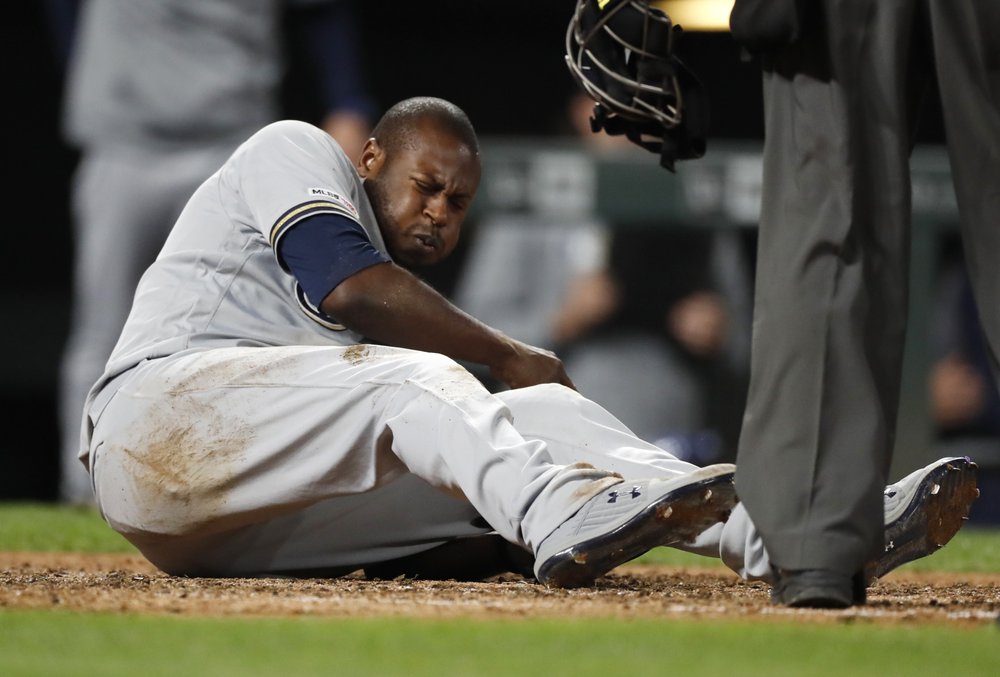 Milwaukee Brewers' Lorenzo Cain reacts after being injured in a collision with Colorado Rockies catcher Tony Wolters while trying to score in the ninth inning of a baseball game Saturday, Sept. 28, 2019, in Denver. (AP Photo/David Zalubowski)

DENVER (AP) — Josh Hader and the Milwaukee Brewers got the help they needed from the Chicago Cubs. They will need a little more after blowing a chance to pull even in the NL Central race.

Hader gave up a tying home run with two outs in the ninth inning and the Brewers lost to Colorado 3-2 in the 10th Saturday night, preventing them from catching St. Louis atop the division.

The Brewers will go into Sunday’s regular-season finale one game behind the Cardinals, who lost 8-6 to the Chicago Cubs. If the Cards and Brewers wind up tied, there would be a one-game tiebreaker Monday in St. Louis for the division title.

If the Brewers don’t overtake the Cardinals, they will play at Washington on Tuesday night in the NL wild-card game.

“It’s a tough loss, but we play tomorrow and there’s going to be more games after that,” manager Craig Counsell said. “We’re playing to force a (game) 163 tomorrow.”

With a chance to tie for the division lead, Hader quickly retired the first two batters in the ninth. But rookie Sam Hilliard then stepped up as a pinch-hitter and launched an opposite-field drive to left off the Brewers closer that made it 2-all.

“Exactly where I wanted it,” Hader said of the pitch. “He got a bat on it, elevation took it from there. There’s times where you execute your pitch and get the result that you didn’t want.”

Trevor Story led off the Colorado 10th with his 35th home run, connecting against Matt Albers (8-6).

The loss was more painful when the Brewers lost another player to injury. Outfielder Lorenzo Cain, who robbed the Rockies of a homer with a catch over the wall in center in the seventh, left the game in the ninth with a left ankle sprain. He was hurt trying to score from first on a double by Ben Gamel and his availability for Sunday is uncertain.

“It’s really, what does he look like when he comes in tomorrow?” Counsell said. “How much swelling is there?”

Counsell was ejected in the ninth inning arguing that Cain didn’t have a lane to slide home. Cain has been troubled by a problem in the same ankle earlier this month.

“If you’re not going to overturn that one, then why is there a rule? Tell me what the rule’s for,” Counsell said.

Milwaukee built a 2-0 lead on Eric Thames’ 25th home run in the fifth and an RBI double in the seventh by Orlando Arcia. Three solo home runs by the Rockies sent the Brewers into Sunday needing more help from the Cubs. Ian Desmond homered off Drew Pomeranz in the Rockies eighth.

Cain finished with two hits and was thrown out twice on the basepaths, but he made up for it with a big catch on Garrett Hampson’s drive in the seventh. He was greeted with a line of teammates near third base as he jogged off the field after the inning.

He also made a diving catch of Yonathan Daza’s sinking liner to end the sixth.

“He was incredible. Obviously, his defense — two plays that were absolutely amazing,” Counsell said. “Huge plays. That’s why he’s a great player and he shows up in these games.”

Yasmani Grandal was also thrown out at home in the sixth when he tried to score from first on a double by Mike Moustakas.

Moustakas was back in the lineup after not starting Friday’s game with a nagging sore left elbow. Moustakas said his elbow “flared up recently” but added it felt much better after a day off.

“It’s something I’ve always dealt with,” he said. “You play 162 games your arm gets a little sore.”

Brewers: OF Ryan Braun was diagnosed with a mild left calf strain after having an MRI. Braun, who was hurt in Friday’s loss, said he will get treatment through Sunday and is optimistic he can play as early as Monday if Milwaukee has a game to decide the NL Central.

RHP Jeff Hoffman (2-6, 6.78 ERA) will start the final game of the season for the Rockies. Counsell announced after Saturday’s game that RHP Adrian Houser (6-7, 3.73) will get the ball for Milwaukee.