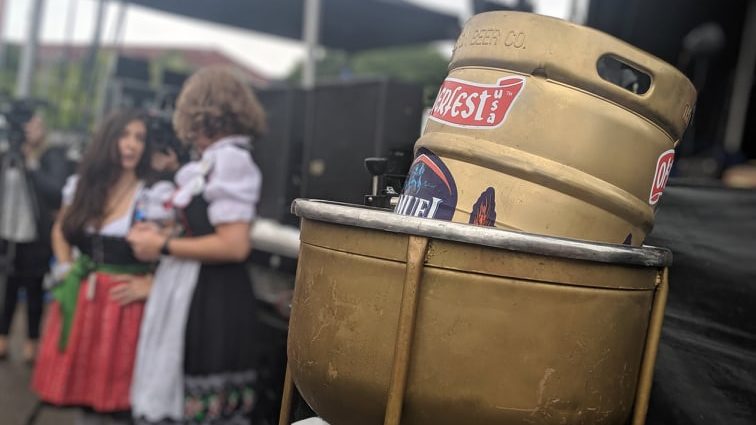 Despite dreary weather, thousands of Oktoberfest fans packed around the stage on the La Crosse grounds to witness the tapping of the golden keg.

James Brennan, Oktobefest co-president, admitted he was nervous when he saw the forcast for Friday’s event.

“I think your energy is keeping the rain away,” Brennan said to the crowd. “I just have a couple of favors to ask you. Fest responsibly. Don’t drink and drive. Behave. Be good to each other when you leave our fest grounds. Make sure you don’t litter. Clean up on the parade route. When you see our first responders, give them a big thank you.”

Mayor Tim Kabat took the stage and gave a special shoutout to Randy Hughes, the longest-serving brewmaster at the City Brewery. Hughes, who is retiring this week, was welcomed by a crowd chanting his name and gifted a string of beer tickets nearly as long as he was tall.

“This couldn’t have been a better present,” Hughes said holding the tickets. “I love doing this every year. I love representing La Crosse. I’ve been very fortunate to have done this for 20 some odd years. I humbly thank every single one of you for supporting Oktoberfest and supporting me through the years. Here’s too many, many great years to come. Prost!”

Levi Schmidt of Samuel Adams helped present the Golden Keg. Samuel Adams sponsored the keg and filled it with its Oktoberfest.

“I want to thank the Oktoberfest board of directors for letting us be a part of this because it is insane standing up here looking at you guys,” Schmidt said.

The crowd erupted in cheers for the 2019 Festmaster Terry Cowgill as he took the stage.

It wouldn’t be the official tapping of the keg without the Canadian, German, and American National Anthems. Karl Friedline, 1991 Festmaster, sang the German anthem. Former Miss La Crosse Oktoberfest (2011) and current officer in the Army Reserves Captain Ellen Poeschel sang the American anthem.