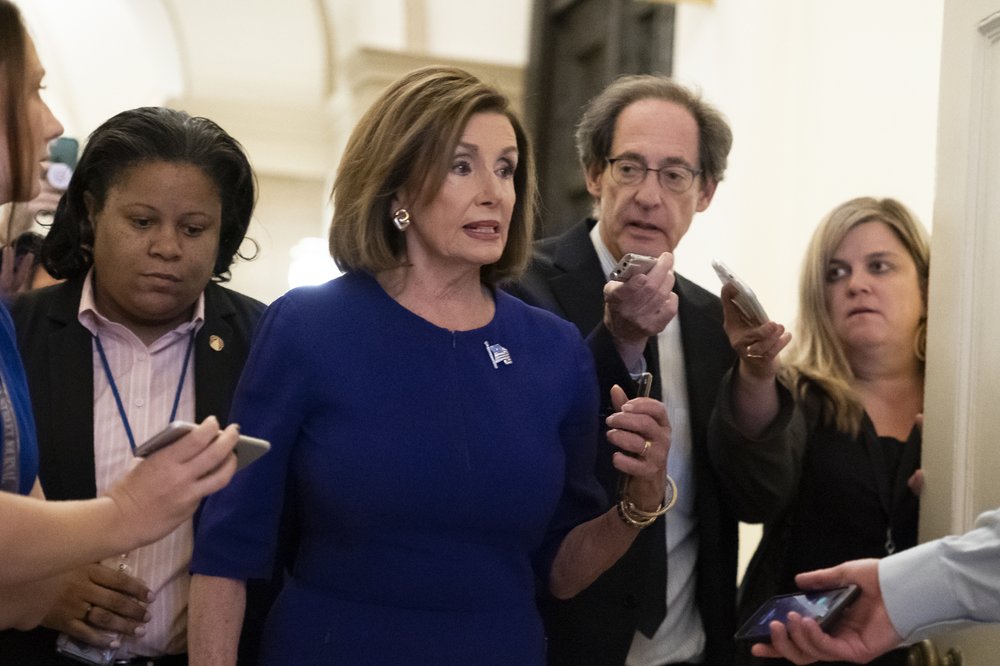 WASHINGTON (AP) — House Speaker Nancy Pelosi launched a formal impeachment inquiry against President Donald Trump on Tuesday, acquiescing to mounting pressure from fellow Democrats and plunging a deeply divided nation into an election year clash between Congress and the commander in chief.

The probe centers on whether Trump abused his presidential powers and sought help from a foreign government for his reelection. Pelosi said such actions would mark a “betrayal of his oath of office” and declared: “No one is above the law.”

Pelosi’s brief statement capped a frenetic stretch on Capitol Hill, as details of a classified whistleblower complaint about Trump burst into the open and momentum shifted swiftly toward an impeachment probe. The charge was led by several moderate Democratic lawmakers from political swing districts, many of them with national security backgrounds and serving in Congress for the first time.

After more than two and one-half years of sharp Democratic criticism of Trump, the formal impeachment quest sets up the party’s most urgent and consequential confrontation with a president who thrives on combat — and injects deep uncertainty in the 2020 White House race. Trump has all but dared Democrats to take this step, confident that the specter of impeachment led by the opposition party would bolster his political support

Trump, who was meeting with world leaders at the United Nations, previewed his defense in an all-caps tweet: “PRESIDENTIAL HARRASSMENT!”

Pelosi had barely finished speaking as he began a mini-blizzard of tweets assailing her announcement.

At issue are Trump’s actions with Ukraine. In a summer phone call with Ukraine President Volodymyr Zelenskiy, he is said to have asked for help investigating Democrat Joe Biden and his son Hunter. In the days before the call, Trump ordered advisers to freeze $400 million in military aid for Ukraine — prompting speculation that he was holding out the money as leverage for information on the Bidens. Trump has denied that charge, but acknowledged he blocked the funds.

Ahead of Pelosi’s announcement, Trump authorized the release of a transcript of his call with Ukraine’s president, predicting it would show no evidence of wrongdoing. The transcript is to be made public on Wednesday.

“You will see it was a very friendly and totally appropriate call,” Trump said.

Speaker Nancy Pelosi has announced the House is moving forward with an official impeachment inquiry of President Donald Trump.

Pelosi made the announcement Tuesday from the speaker’s office at the Capitol saying “no one is above the law.”

Trump is alleged to have pressured the government of Ukraine to look into former Vice President Joe Biden, one of the front-runners for the Democratic nomination.

The move puts the Democratic speaker’s stamp on the investigations that have been underway in the House.

Calls for an impeachment inquiry have intensified following reports that Trump may have sought a foreign government’s help in his reelection bid.

Pelosi says the president “must be held accountable.”

Trump insists he did nothing wrong when it comes to Ukraine and announced he’ll release a transcript of a phone call with the Ukrainian president.

The GOP-controlled Senate has approved a nonbinding but symbolically important resolution calling on the Trump administration to immediately provide the House and Senate intelligence committees a copy of a whistleblower complaint involving President Donald Trump.

The measure put forward by Minority Leader Chuck Schumer passed by voice vote after Majority Leader Mitch McConnell endorsed the idea and noted that the bipartisan leadership of the Senate Intelligence Committee was working behind the scenes to obtain the complaint.

Trump said he had authorized the release of a transcript of the call on Wednesday.