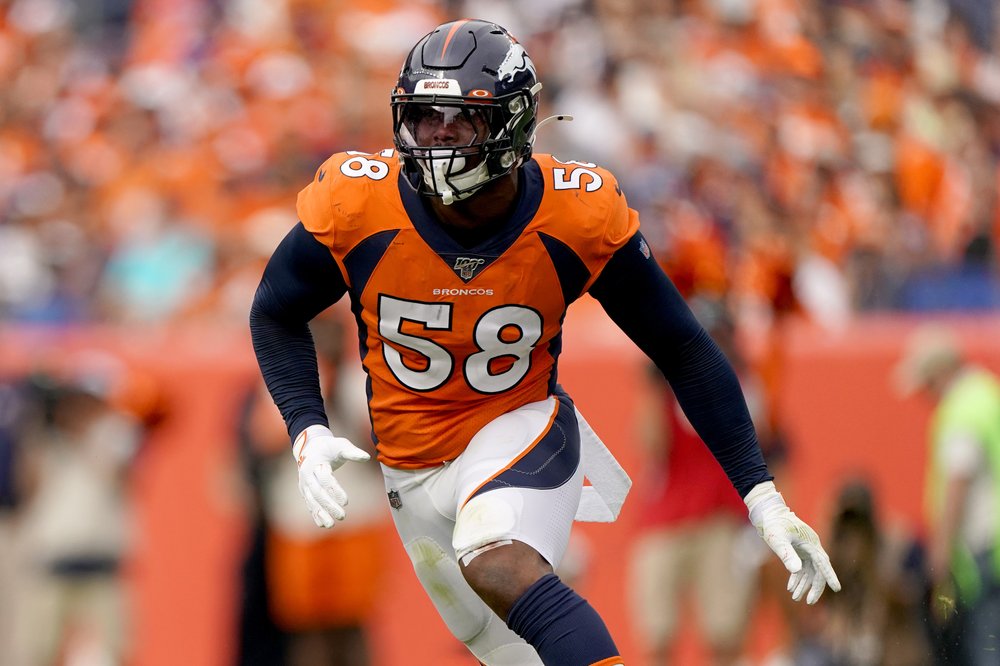 ENGLEWOOD, Colo. (AP) — Von Miller has dealt with sack droughts before, but never this early in the season.

“I always get them at the end of the year,” Miller told The Associated Press following his unusually somber weekly appearance at the podium Wednesday. “I guess it bothers you a little bit more at the beginning of the year because the season’s just starting and you want to get in the race, you want to get ahead of the race.”

The Broncos (0-2) have yet to register a sack or a takeaway under Vic Fangio, who designed the NFL’s best defense in Chicago the last few seasons before earning his first head coaching job this year in Denver.

Fangio used his introductory news conference to challenge Miller, with his 98 career sacks and Super Bowl MVP award, to be even better.

Although he’s dropping into coverage at different times, Miller told the AP that any notion his creativity is crimped under Fangio’s system is erroneous. He said he still has the freedom to freelance to try to wreck game plans like he did under John Fox, Gary Kubiak and Vance Joseph.

“They’re not asking me to do nothing that I haven’t done before in previous years,” Miller said.

He added that he has his full repertoire of moves available like the duck to the inside with defensive end Derek Wolfe covering for him by containing the edge.

“Yeah, I feel I can slip inside more now,” Miller said. “I’m doing the exact stuff that I was doing in previous years. It’s just at different moments.

The sackless streak could end this weekend when the Broncos visit the Green Bay Packers (2-0), whose O-line has allowed seven sacks of Aaron Rodgers so far.

“They’re just collapsing the pocket on him,” said Bradley Chubb, Miller’s pass-rushing partner. “Aaron is one of those guys that can make plays with his feet and likes to let routes develop downfield while he’s running around. … That’s our main goal, just keep him in the pocket and allow our coverage to be there and hopefully we get there for the sack.”

Being without a sack or a takeaway makes Denver’s defense even more dangerous in Packers first-year coach Matt LaFleur’s view.

“I’m sure they’re going to try to scheme some stuff up, as well, and those guys are probably champing at the bit to hit home on the quarterback,” LaFleur said. “On the flip side of it, we’ve probably given up too many sacks, so I know those guys are going to see an opportunity in front of them and we know where to get their best shot.”

Fangio said he won’t do anything special schematically to spring Miller and Chubb for their first sacks.

“I don’t think so, not to the degree you’re alluding to,” Fangio said.

Fangio said he’s not overly concerned about the pass rush’s slow start because the Raiders and Bears both ran the ball more than they threw it and the Broncos’ biggest lead so far is three points.

LaFleur said the common denominator with Oakland and Chicago was they made sure to “get the ball out fast. You’re always thinking about that when you’ve got two of the premier pass rushers in the National Football League in Bradley Chubb and Von Miller.”

Miller, who has faced his usual dose of double-teams and chippers, has never entered Week 3 still seeking his first sack. Usually, it’s December before he has a sackless streak, when the wear and tear of the season starts to take its toll and footing gets trickier.

“I always get droughts at the end of the year,” Miller said as he sat alone at a table by his locker, looking up from his phone.

Over his career, Miller has averaged .83 sacks a game in September, .95 in October, 1.0 in November and just half a sack in December.

Forty-six times in his 122 career games he’s been held without a sack and 20 of those have come in December (or the regular season finale in early January). By contrast, he has 10 sackless games in September and eight each in October and November.

Miller said he’s more bothered by the Broncos’ 0-2 record than by their lack of sacks, which he always says comes in bunches.

He takes little solace in that, though, as he tries to break out of his slump.

“But that doesn’t guarantee that it’s going to happen.”