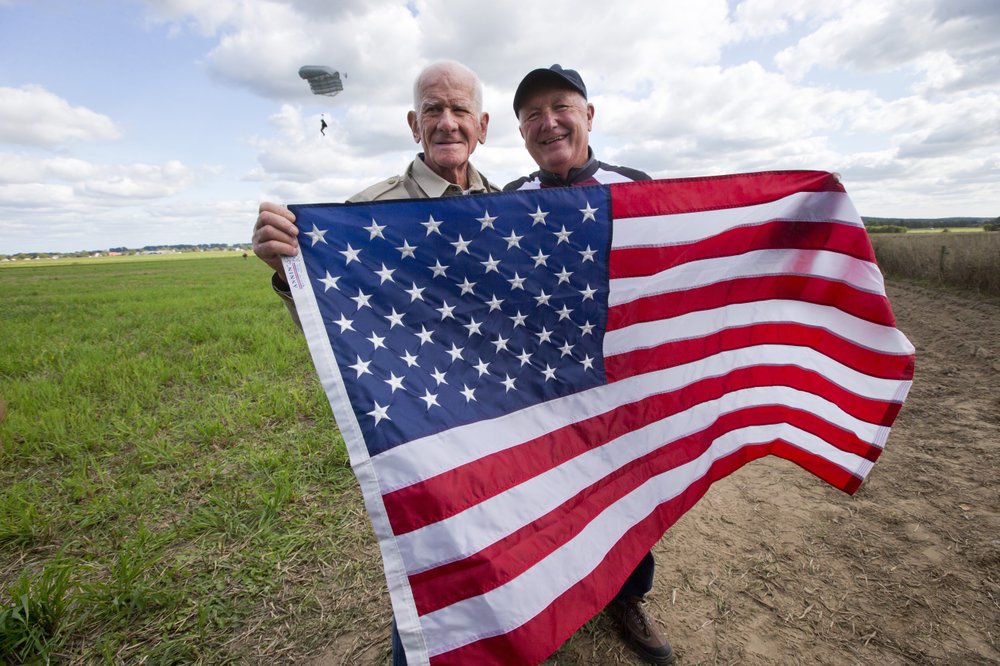 Tom Rice, a 98-year-old American WWII veteran, and U.S. Ambassador Pete Hoekstra, right, pose with the U.S. flag after landing with a tandem parachute jump from a plane near Groesbeek, Netherlands, Thursday, Sept. 19, 2019, as part of commemorations marking the 75th anniversary of Operation Market Garden. Rice jumped with the U.S. Army's 101st Airborne Division in Normandy, landing safely despite catching himself on the exit and a bullet striking his parachute. (AP Photo/Peter Dejong)

GROESBEEK, Netherlands (AP) — Jump by jump, 98-year-old D-Day veteran Tom Rice is nudging closer to his goal of leaping out of planes at age 100.

The American who caused a sensation in June by parachuting into Normandy for the 75th anniversary of the 1944 D-Day landings was at it again on Thursday.

This time, his landing zone was in the Netherlands.

“Woooo! That was a nice fall!” he yelped as his ’chute opened.

Strapped to a younger parachutist who steered their canopy, Rice jumped as part of commemorations for the massive landings of airborne Allied troops in September 1944.

Hundreds of other parachutists also soared over the Netherlands on Thursday to commemorate the 75th anniversary of Operation Market Garden, a 1944 land-and-airborne thrust through the country.

Allied strategists hoped the assault would clear a path toward Nazi Germany’s industrial heartland and hasten the end of the war. But ground troops got bogged down, leaving airborne soldiers who’d jumped ahead of the thrust outnumbered and outgunned.

The military bungle was immortalized in the Hollywood film and Cornelius Ryan’s book “A Bridge Too Far.”

More Allied troops – about 11,500 – died in the nine days of Operation Market Garden than in the D-Day landings.