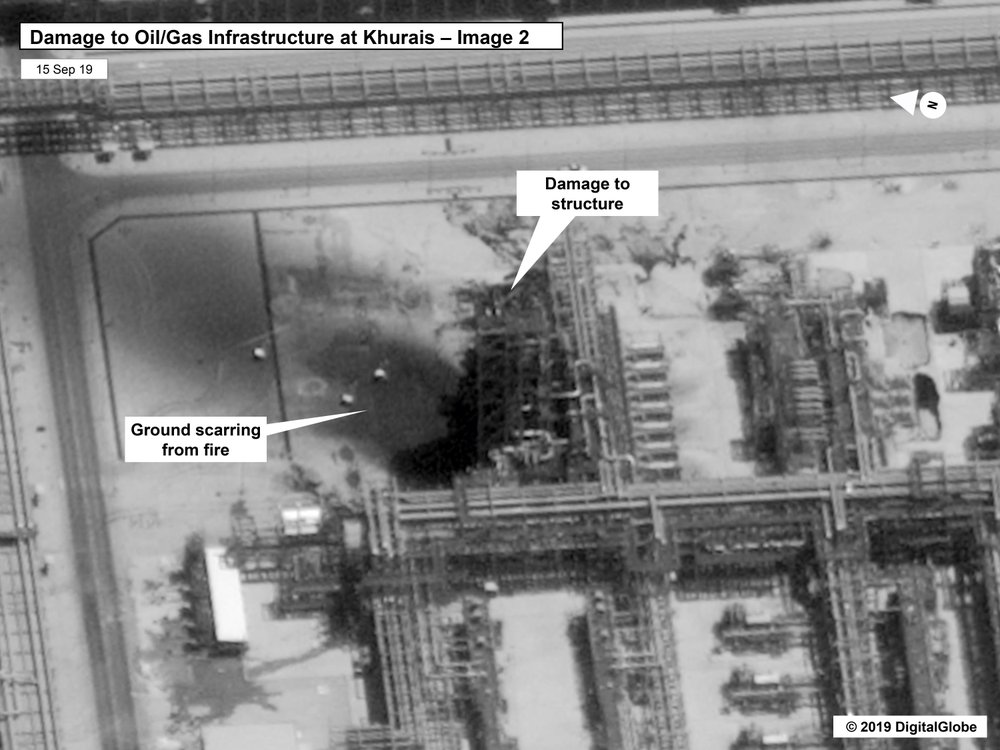 This image provided on Sunday, Sept. 15, 2019, by the U.S. government and DigitalGlobe and annotated by the source, shows damage to the infrastructure at at Saudi Aramco's Kuirais oil field in Buqyaq, Saudi Arabia. The drone attack Saturday on Saudi Arabia's Abqaiq plant and its Khurais oil field led to the interruption of an estimated 5.7 million barrels of the kingdom's crude oil production per day, equivalent to more than 5% of the world's daily supply. (U.S. government/Digital Globe via AP)

WASHINGTON (AP) — The U.S. tried to build its case Monday that Iran was behind the fiery weekend attack on key Saudi Arabian oil facilities that raised new war worries and sent energy prices soaring. Iran denied responsibility, while President Donald Trump said the United States was “locked and loaded” to respond if necessary.

The Americans alleged the pattern of destruction suggested Saturday’s attack did not come from neighboring Yemen, as claimed by Iranian-backed Houthi rebels there. A Saudi military spokesman later made a similar accusation, alleging “Iranian weapons” had been used in the assault.

Iran rejected the allegations, and a government spokesman said there now was “absolutely no chance” of a hoped-for meeting between Iranian President Hassan Rouhani and Trump at the U.N. General Assembly next week.

For his part, Trump sent mixed signals, saying his “locked and loaded” government waited for Saudi confirmation of Iran being behind the attack while later tweeting that the U.S. didn’t need Mideast oil “but will help our Allies!”

One U.S. official, speaking on condition of anonymity to discuss internal deliberations, said the U.S. was considering dispatching additional military resources to the Gulf but that no decisions had been made. The U.S. already has the USS Abraham Lincoln aircraft carrier battle group in the area, as well as fighter jets, bombers, reconnaissance aircraft and air defenses.

Downplaying any talk of imminent U.S. military action, Vice President Mike Pence’s chief of staff, Marc Short, told reporters at the White House that the president’s language was “a reflection” that his administration was advancing policies that protect the U.S. “from these sorts of oil shocks.”

“I think that ‘locked and loaded’ is a broad term that talks about the realities that” the U.S. is “safer and more secure domestically from energy independence,” Short said.

The new violence has led to fears that further action on any side could rapidly escalate a confrontation that’s been raging just below the surface in the wider Persian Gulf in recent months. There already have been mysterious attacks on oil tankers that Washington blames on Tehran, at least one suspected Israeli strike on Shiite forces in Iraq, and the downing of a U.S. military surveillance drone by Iran.

Those tensions have increased ever since Trump pulled the U.S. out of Iran’s 2015 agreement with world powers that curtailed Iranian nuclear activities and the U.S. re-imposed sanctions that sent Iran’s economy into freefall.

Benchmark Brent crude prices gained nearly 20% in the first moments of trading Monday before settling down to over 10% higher as trading continued. A barrel of Brent traded up $6.45 to $66.67.

That spike represented the biggest percentage value jump in Brent crude since the run-up to the 1991 Gulf War that saw a U.S.-led coalition expel Iraqi dictator Saddam Hussein’s forces from Kuwait.

U.S. benchmark West Texas crude was up around 10%. U.S. gasoline and heating oil similarly were up.

The attack halted production of 5.7 million barrels of crude a day, more than half of Saudi Arabia’s global daily exports and more than 5% of the world’s daily crude oil production. Most of that output goes to Asia.