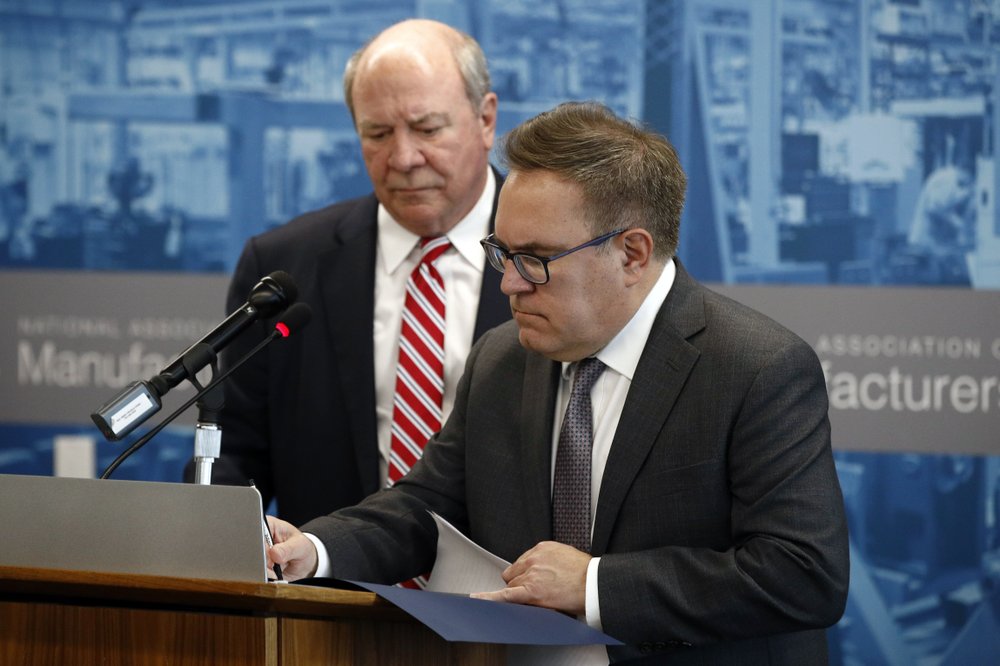 Environmental Protection Agency Administrator Andrew Wheeler, right, signs a document in front of Assistant Secretary of the Army for Civil Works R.D. James to revoke the Waters of the United States rule, an Obama-era regulation that provided federal protection to many U.S. wetlands and streams, Thursday, Sept. 12, 2019, in Washington. (AP Photo/Patrick Semansky)

TRAVERSE CITY, Mich. (AP) — The Trump administration on Thursday revoked an Obama-era regulation that shielded many U.S. wetlands and streams from pollution but was opposed by developers and farmers who said it hurt economic development and infringed on property rights.

Environmental groups criticized the administration’s action, the latest in a series of moves to roll back environmental protections put into place under President Barack Obama.

The 2015 Waters of the United States rule defined the waterways subject to federal regulation. Scrapping it “puts an end to an egregious power grab, eliminates an ongoing patchwork of clean water regulations and restores a longstanding and familiar regulatory framework,” Environmental Protection Agency chief Andrew Wheeler said at a news conference.

Wheeler and R.D. James, assistant secretary of the Army for civil works, signed the repeal document.

Since enactment of the Clean Water Act in 1972, the federal government has gone beyond protection of navigable waterways and their major tributaries to assert jurisdiction over “isolated ponds and channels that only flow after it rains,” Wheeler said.

“As the scope expands, so too has Washington’s power over private property and the states’ traditional authority to regulate their land and water resources,” he said.

President Donald Trump had ordered the agencies to develop a replacement policy that has a more restrictive definition of protected wetlands and streams, leaving fewer subject to federal protection.

Environmentalists say the move would leave millions of Americans with less safe drinking water and allow damage of wetlands that prevent flooding, filter pollutants and provide habitat for a multitude of fish, waterfowl and other wildlife.

The Natural Resources Defense Council said the administration’s action would be challenged in court.

“The Clean Water Rule represented solid science and smart public policy,” the group said in a statement. “Where it has been enforced, it has protected important waterways and wetlands, providing certainty to all stakeholders.”

But Don Parrish, congressional relations director for the American Farm Bureau Federation, said the 2015 regulation that extended federal protection to many U.S. wetlands and waterways created uncertainty about where farmers could cultivate land.

“It would be great if farmers didn’t have to hire an army of consultants and lawyers just to be able to farm,” he said.

Republican Sen. Kevin Cramer of North Dakota said the Obama rule was “an unconstitutional power grab that did nothing to advance good water management.”

The question of which waters are covered under the Clean Water Act has inspired decades of lawsuits and congressional debate.

A sharply divided Supreme Court in 2006 produced three differing opinions, leading the Obama administration to craft its rule. It provided federal oversight to upstream tributaries and headwaters, including wetlands, ponds, lakes and streams that can affect the quality of navigable waters.

The regulation drew quick legal challenges. Courts prevented it from taking effect in parts of the U.S.

Betsy Southerland, who was director of science and technology in EPA’s Office of Water during the Obama administration, said repealing its regulation would create further regulatory confusion.

“This repeal is a victory for land developers, oil and gas drillers and miners who will exploit that ambiguity to dredge and fill small streams and wetlands that were protected from destruction by the 2015 rule because of their critical impact on national water quality,” Southerland said.