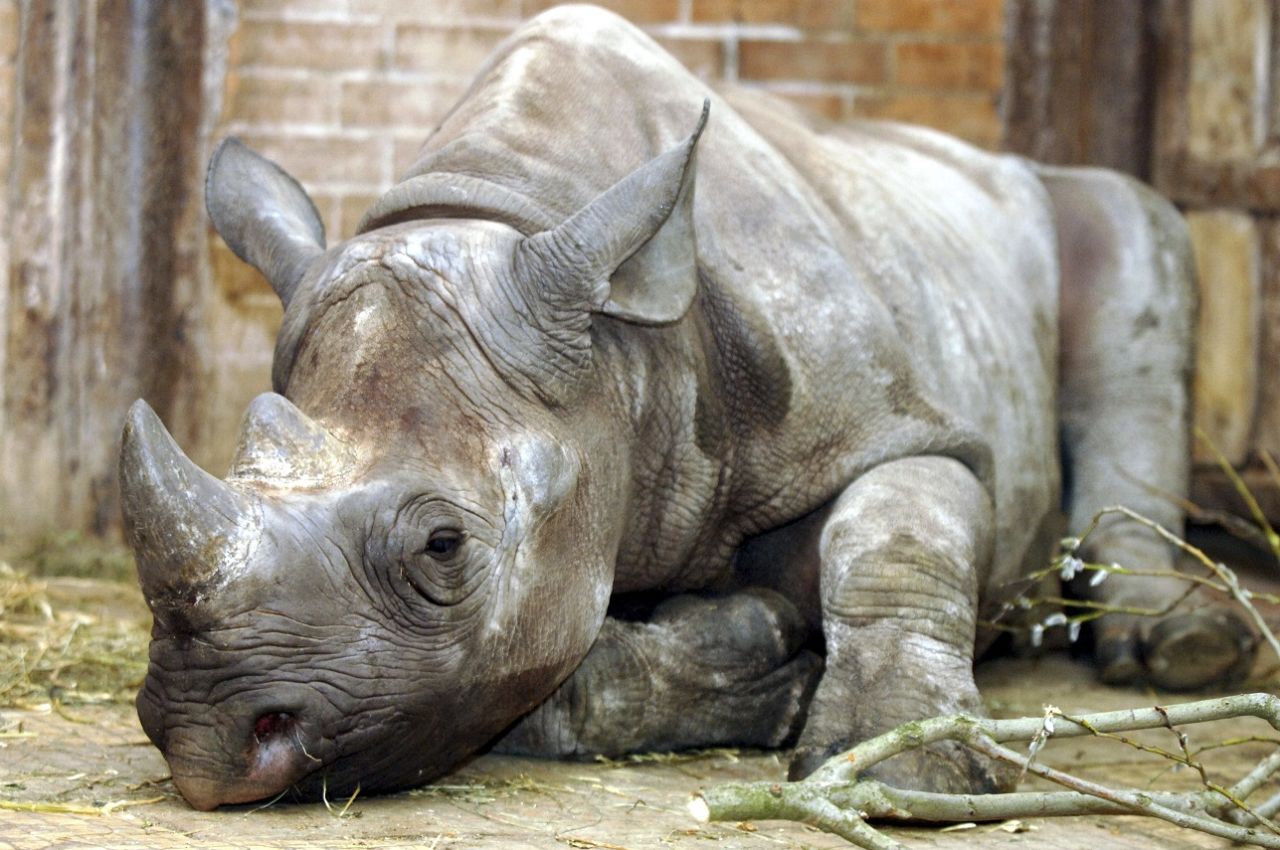 FILE - A rare black rhinoceros, a male named Davu, is seen in his enclosure at the zoo in the Czech Republic. (AP Photo/CTK, Alexandra Mlejnkova)

WASHINGTON (AP) — The Trump administration said it will issue permit to a Michigan trophy hunter to import the skin, skull and horns from a rare black rhinoceros he shot in Africa.

Documents show Chris D. Peyerk of Shelby Township, Michigan, applied last year for the permit required by the Fish and Wildlife Service to import animals protected under the Endangered Species Act. Peyerk paid $400,000 to an anti-poaching program to receive permission to hunt the male rhino bull inside a Namibian national park in May 2018.

The International Union for Conservation of Nature lists black rhinos as a critically endangered species, with about 5,500 remaining in the wild. Nearly half of those are in Namibia, which is allowed under international convention to permit five male rhinos a year to be legally killed by hunters.

The specific subspecies Peyrek listed on his application, the south-western black rhinoceros, is listed as “vulnerable” by the IUCN, meaning it is at less threat of extinction than the rest of the species as a whole.

Peyerk did not respond to a phone message last week seeking comment. He is president of Dan’s Excavating Inc., a large construction contractor in Michigan.

The numbers of black rhinos have been increasing in recent years with stricter conservation management, but dozens are still illegally poached each year for their horns, which are sold on the black market for use in traditional Chinese medicine and as a status symbol. The horns are composed largely of the protein keratin, also the chief component in hair and fingernails.

“Legal, well-regulated hunting as part of a sound management program can benefit the conservation of certain species by providing incentives to local communities to conserve the species and by putting much-needed revenue back into conservation,” said Laury Parramore, spokeswoman for the Fish and Wildlife Service.

For decades federal regulators issued no import permits for black rhinos, but as populations rebounded in Africa the Obama administration issued three starting in 2013. The Trump administration has issued another two.

Though President Donald Trump derided trophy hunting in a tweet as a “horror show,” his adult sons are avid big-game hunters and his administration reversed Obama-era restrictions on the import of endangered elephant and lion trophies from several African countries.

Records show Peyerk was represented in his effort to get a rhino permit by John J. Jackson III, a Louisiana attorney who provides free legal assistance to trophy hunters through a nonprofit group called Conservation Force. He is also a past president of Safari Club International, a trophy hunting group that has lobbied the Trump administration to loosen import restrictions on endangered big game animals.

Jackson was appointed in 2018 to the International Wildlife Conservation Council, an advisory board set up by then-Interior Secretary Ryan Zinke to help promote trophy hunting. Jackson said he sees no conflict between advising the Fish and Wildlife Service on policy issues while also petitioning the agency on the behalf of his legal clients.

“The permitting is just one cog in the conservation wheel of what we do,” Jackson said Friday. “We establish and support programs on the ground that enhance the survival of the particular specie. Our mission is the recovery of the species population, not the private interest of the hunter.”

The $400,000 paid by Peyrek went to a trust fund set up by the Namibian government for wildlife management, conservation, rural development and other activities aimed at promoting the coexistence of humans and wildlife.

“We urge our federal government to end this pay-to-slay scheme that delivers critically endangered rhino trophies to wealthy Americans while dealing a devastating blow to rhino conservation,” said Kitty Block, the head of the Humane Society of the United States and Humane Society International. “While we cannot turn back the clock to save this animal, the administration can stop the U.S. from further contributing to the demise of this species by refusing future import permits of black rhino trophies.”