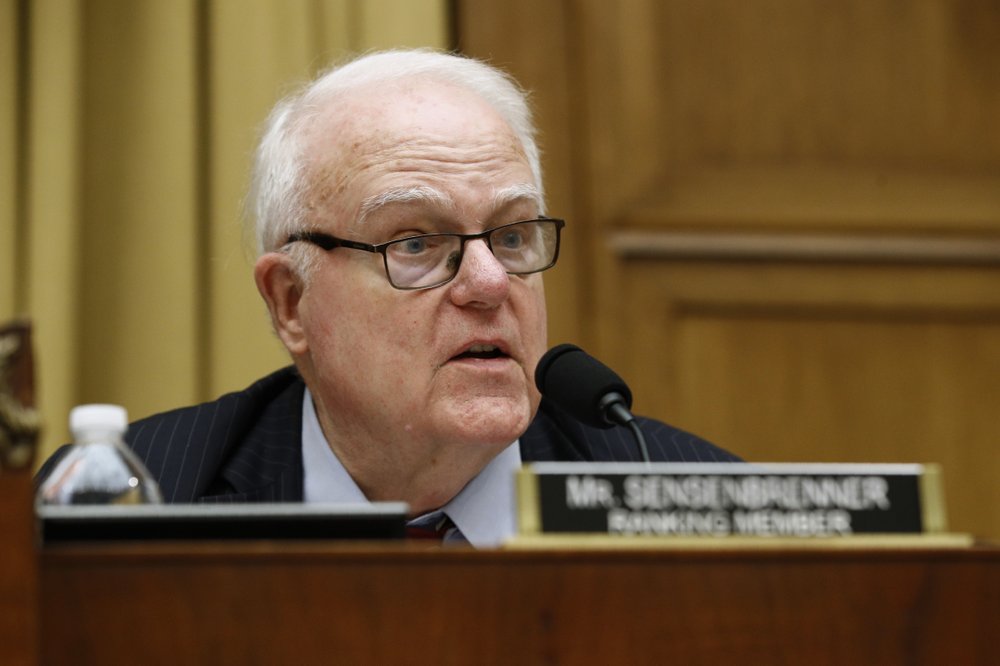 FILE - In this July 16, 2019, file photo, Rep. Jim Sensenbrenner, R-Wisc., ranking member of the House Judiciary antitrust subcommittee, speaks during a House Judiciary subcommittee hearing with representatives from major tech companies on Capitol Hill in Washington. Sensenbrenner says he won't seek re-election. The 76-year-old Sensenbrenner said Wednesday, Sept. 4, he will retire from Congress in January 2021, at the end of his current term. (AP Photo/Patrick Semansky, File)

WASHINGTON (AP) — The day started with one Republican congressman from Texas announcing he would retire and ended with another, a long-serving former committee chairman from Wisconsin, saying he too was ready to bow out, signaling the House GOP mood as the party tries to find its path back to the majority in 2020.

With the retirement announcements of Reps. Bill Flores, R-Texas, and Jim Sensenbrenner, R-Wis., 15 House Republicans have said they will step aside before next year’s elections.

Sensenbrenner is 76 years old and held his district for 42 years, while Flores is 65 years old.

The departures show the limits of serving in the House minority, but also raise questions about the sway of President Donald Trump’s own reelection effort alongside down-ballot candidates.

A spokesman for the House GOP’s campaign committee noted that both Flores and Sensenbrenner come from Republican districts, which suggests voters will have little interest in Democratic candidates. That’s unlike the battleground seats where Trump won in 2016, but so did Democrats, and Republicans are concentrating efforts as they try to regain control of the House.

“Retirements in safe Republican seats like these have no impact on battleground seats,” said Bob Salera, a spokesman for the National Republican Congressional Committee. He portrayed the Democrats as having a “socialist agenda,” with legislation on health care, climate change and other issues, that he said “will be an anchor around their necks.”

Still, the spate of House Republican retirements puts them ahead of their pace during the 2018 election cycle, when 34 did not run for reelection. That was the party’s highest number of retirements since at least 1930. In Texas alone, five House Republicans are retiring.

Democrats have a legitimate shot at capturing at least four of the Republican seats, complicating Republican efforts to win back the chamber’s majority . Democrats control the House 235-197, with one independent and two vacancies in North Carolina that are scheduled to be filled in special elections next week.

On the Democratic side, Rep. Susan Davis of California also announced Wednesday she would not seek reelection. A 10-term veteran, Davis has worked on education and military issues in the San Diego seat Democrats expect to retain. She became the fourth Democrat to say this year that they won’t run again.

The reasons why lawmakers choose to step aside can be varied, but the Republican departures are also bookended by the GOP’s situation. House Republicans have imposed term-limit rules on most committee chairmen, denying the traditional opportunity to build up influence and seniority with the gavel.

While having the president in the White House is often attractive to lawmakers, the House minority has less of a legislative agenda, even with Trump in office.

Sensenbrenner, a former Judiciary Committee chairman, has been in office 40 years. He was a chief author of the USA Patriot Act, an anti-terrorism measure enacted in response to the attacks of Sept. 11, 2001. He was also an impeachment manager during the proceedings against President Bill Clinton.

First elected in 1978, he is the second-longest serving current member of the House, trailing only Alaska Republican Don Young in seniority. Sensenbrenner said in a statement that when he first began public service, “I said I would know when it was time to step back” and that he’d decided now was that time.

A combative conservative, he has championed immigration restrictions, including curbing asylum and barring immigrants in the country illegally from obtaining driver’s licenses. In 2015, he wrote legislation restricting the USA Patriot Act by limiting federal gathering of some data on individuals.

Flores, who once led the conservative Republican Study Committee, has served five terms and said he’d always committed to serving fewer than six.

More than one-third of the House GOP retirements are from Texas, where a generation of Republican dominance is weakening amid demographic changes and booming suburbs that are trending to Democrats.

The chairwoman of the Democratic campaign committee, Rep. Cheri Bustos of Illinois, said in a statement that she expects the “Texodus” of Republicans will continue.

Sensenbrenner’s district includes parts of Milwaukee’s suburbs. In his statement, he said he’s cast 23,882 House votes and sponsored or co-sponsored 4,299 pieces of legislation, of which 217 were signed into law by six different presidents.

Sensenbrenner is a descendent of the founder of Kimberly-Clark, the company credited with inventing the sanitary napkin. Financially comfortable since birth, he also won at least one District of Columbia lottery, for $250,000.

Besides the 15 GOP retirees, a 16th — Rep. Tom Marino of Pennsylvania — quit Congress early this year and has already been replaced by another Republican.