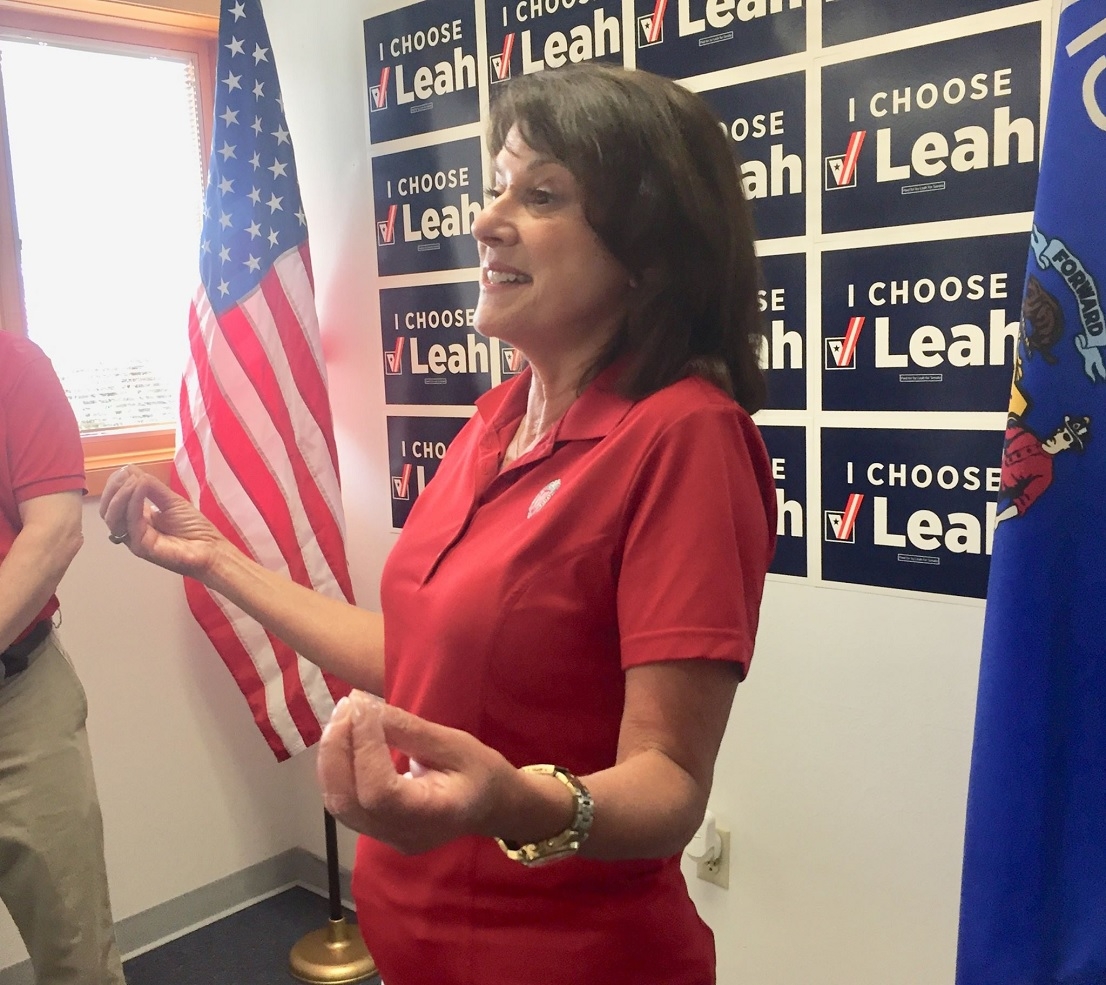 Leah Vukmir at a campaign stop in La Crosse. Republican candidates have begun to jockey for position ahead of a likely stampede to run for an open Wisconsin congressional seat. Former state senator and 2018 Republican U.S. Senate nominee Leah Vukmir, along with current state Senate Majority Leader Scott Fitzgerald, both said they were seriously considering getting in the race

MADISON, Wis. (AP) — Potential Republican candidates began to jockey for position Thursday ahead of a likely stampede to run for an open Wisconsin congressional seat in a district that’s a conservative hotbed and key to President Donald Trump’s re-election hopes.

U.S. Rep. Jim Sensenbrenner announced Wednesday that he won’t run for a 22nd term representing the suburban Milwaukee area, long the heart of Wisconsin’s conservative base. Running up the numbers there has long been the lynchpin for successful statewide Republican candidates.

Trump underperformed there in 2016, particularly with suburban women, while winning Wisconsin by fewer than 23,000 votes thanks largely to strong support in more rural areas. Part of his strategy to win Wisconsin in 2020 relies on performing better with the voters in Sensenbrenner’s district who turned out more strongly for former Gov. Scott Walker’s re-election bid in 2018 than they did for Trump in 2016.

The district held by Sensenbrenner for 42 years has also been home to some of Wisconsin’s most prominent conservatives and has served as a launching pad for the political careers of many, including Walker.

“There are a lot of important areas of the state, but this area … is a crucial building block,” said Republican strategist Brian Reisinger.

The list of potential candidates to replace Sensenbrenner is long.

Former state senator and 2018 Republican U.S. Senate nominee Leah Vukmir, along with current state Senate Majority Leader Scott Fitzgerald, both said they were seriously considering getting in the race.

Both are Trump loyalists, which could be a boon for the president’s re-election hopes in the district. Vukmir ran statewide just last year, winning the GOP Senate primary but losing to Democratic Sen. Tammy Baldwin by 10 points. Trump endorsed Vukmir and came to Wisconsin to campaign for her.

Fitzgerald was one of Trump’s earliest and most vocal supporters in the state and on Thursday he pitched himself as someone who would be a strong ally to the president.

“Everybody knows that D.C. is a mess, and in need of more Wisconsin-style common sense,” Fitzgerald said.

He has never run for office outside of his state Senate seat, which he’s held since 1995. Fitzgerald and Vukmir worked closely together while they were both in the Senate, including leading the way to enact Walker’s anti-union and other conservative laws.

If Vukmir gets in, she would immediately be the front-runner but Fitzgerald would also be “great,” said Paul Farrow, the Waukesha County executive. Farrow is also considering a run and plans to make a decision later this month.

“She still has incredible name recognition,” Farrow said of Vukmir, calling her “a great voice for the conservative movement and her constituents.”

State Sen. Chris Kapenga, who is also weighing a run, said he didn’t expect anyone to be able to clear the field of potential candidates.

“I don’t think anybody would want to step up and try to push anybody else out,” Kapenga said. “We need to make sure we’re not creating enemies of each other, whoever gets into that race.”

Democrat Tom Palzewicz, an entrepreneur and Navy veteran, said within minutes of Sensenbrenner’s retirement announcement late Wednesday that he would run. Palzewicz lost to Sensenbrenner in 2018, getting just 38% of the vote compared with 62% for Sensenbrenner.

Reisinger, the Republican strategist who has worked on the campaigns of Walker and Johnson, said candidates need to judge the political environment generally, who they may face in a primary and the opportunity they have to potentially serve that congressional district for a long time.

The retirement could be a once-in-a-generation chance for many Republicans who weren’t even born when the 76-year-old Sensenbrenner was first elected to the state Legislature in 1968.

“There’s a lot of interest and excitement around it because of the big change that was unexpected,” Reisinger said.