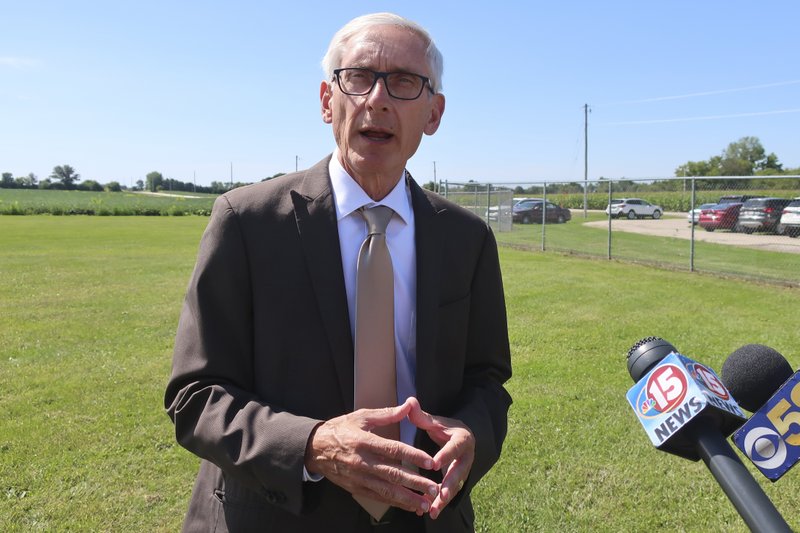 Gov. Tony Evers says he doesn't fault Republicans for not wanting to sign confidentiality agreements as requested by fellow Democratic Attorney General Josh Kaul on Thursday, Aug. 29, 2019, in Beaver Dam, Wisconsin. Evers told reporters that Republicans who stand in the way of Kaul settling lawsuits on behalf of the state need to figure out a resolution so Wisconsin does not lose millions of dollars in settlement money. (AP Photo/Scott Bauer)

BEAVER DAM, Wis. (AP) — Faced with a tight deadline, the Republican co-chairs of the Wisconsin Legislature’s budget committee said Thursday that their attorney will sign a confidentiality agreement requested by Democratic Attorney General Josh Kaul to end a stalemate over lawsuit settlements.

Republicans passed a law in December’s lame-duck legislative session that gives the Legislature’s GOP-controlled budget committee the power to approve settlements that Kaul’s office reaches on lawsuits. There are at least 15 pending lawsuits that could net the state millions of dollars in settlements that are in limbo as Kaul and lawmakers squabble over how to proceed.

Kaul met behind closed doors with the committee on Tuesday and asked lawmakers to sign confidentiality agreements so they could discuss the lawsuits. The lawmakers refused, despite a warning from Kaul’s Department of Justice that the state must act by Friday on a “very urgent matter of tremendous importance to the state.”

On Thursday afternoon, less than 24 hours before the deadline, the Republican co-chairs of the committee said they had hired an attorney who would sign the confidentiality agreement. Kaul did not immediately respond to messages about whether that would be sufficient.

“This action should resolve the Attorney General’s confidentiality concerns, and he should send over all of the relevant settlement information for review,” committee co-chairs Sen. Alberta Darling and Rep. John Nygren said in a statement. “The Committee stands ready to review and approve any settlements that are in the state’s interest.”

They also said that Kaul’s demand for confidentiality agreements to be signed was “an obvious effort to undermine the law by delaying the committee’s work.”

Kaul said that reviewing confidential information and keeping that information private “is part and parcel of the review of settlements.”

“If I was a state representative, I wouldn’t sign that thing because you’re responsible for openness and transparency,” Evers said of the confidentiality agreements. “That should be left to the attorney general.”

Evers said Republicans who stand in the way of Kaul settling lawsuits on behalf of the state need to figure out a resolution so Wisconsin does not lose millions of dollars.

“It’s frustrating and hopefully we’ll figure this out,” Evers said following an economic development announcement in Beaver Dam. “We need to have adults come to the table and figure it out.”

Evers said Republicans were trying to constrain Kaul’s authority to settle lawsuits by passing the law requiring lawmaker approval. That action, Evers said, put “the people of Wisconsin in this weird box.”