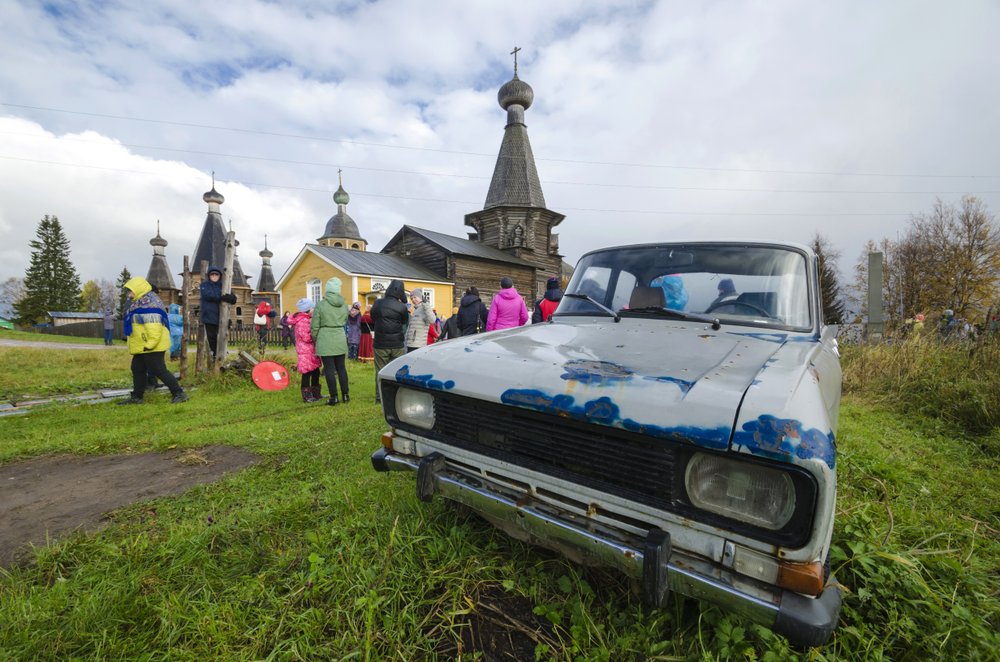 In this photo taken on Oct. 7, 2018, people walk the street with the 18th century Trinity Church in the background in the village of Nyonoksa, northwestern Russia. The Aug. 8, 2019, explosion of a rocket engine at the Russian navy's testing range just outside Nyonoksa led to a brief spike in radiation levels and raised new questions about prospective Russian weapons. (AP Photo/Sergei Yakovlev)

MOSCOW (AP) — A deadly explosion at a naval weapons testing range in northwestern Russia. A brief spike in radiation levels. An evacuation order issued, then rescinded, for a nearby village.

Last week’s mysterious accident on the White Sea, along with changing or contradictory information from Russian authorities, has led to speculation about what happened and what type of weapon was involved, and has even raised comparisons to the 1986 disaster at the Chernobyl nuclear power plant.

What is known and unknown about the Aug. 8 incident in the Russian region of Arkhangelsk:

A testing range was set up near the village of Nyonoksa, about 1,000 kilometers (615 miles) north of Moscow on the White Sea in 1954, when the Soviet Union’s missile program was still in its nascent phase. It has served as the main ground for testing a variety of missiles used by the Soviet and then Russian navy ever since.

They included anti-ship and anti-aircraft missiles of various types, as well as intercontinental ballistic missiles intended for the nation’s nuclear submarines.

The authorities have routinely closed various parts of the White Sea’s Dvina Bay to navigation during missile tests, and the approximately 500 residents of Nyonoksa have regularly been asked to temporarily leave their homes, usually for a few hours at a time, apparently as a routine precaution during military activity.

The area has been off-limits to the outsiders, but tourists who ask for advance permission have been allowed to visit Nyonoksa, the site of a beautiful 18th century wooden church.

The village is connected by rail to Severodvinsk, a city of 183,000 people about 30 kilometers (19 miles) to the east.

First word of the explosion came from the Russian Defense Ministry, which initially said the Aug. 8 blast of a liquid-propellant rocket engine killed two people and injured six others. It said in a statement that no radiation had been released, although the city administration in Severodvinsk reported a brief rise in radiation levels — a contradiction that recalled Soviet-era cover-ups of disasters like Chernobyl.

Two days later, Russia’s state-controlled nuclear agency Rosatom acknowledged that the explosion occurred on an offshore platform during tests of a “nuclear isotope power source,” and that it killed five nuclear engineers and injured three others. It’s still not clear whether those casualties were in addition to the earlier dead and injured.

Russian authorities then closed part of Dvina Bay to shipping for a month, an apparent attempt to keep outsiders from seeing an operation to recover the missile debris.

On Monday, the five engineers were buried in Sarov, a city that hosts Russia’s main nuclear weapons research center.

Emergency officials issued a warning to all workers to stay indoors and close the windows. Frightened residents rushed to buy iodine, which can help reduce risks from exposure to radiation.

A later report from Russia’s state weather and environmental monitoring agency said the peak radiation reading in Severodvinsk on Aug. 8 was 1.78 microsieverts per hour in just one neighborhood — about 16 times the average. Peak readings in other parts of Severodvinsk varied between 0.45 and 1.33 microsieverts per hour. It said that radiation levels fell back to normal after 2½ hours.

The brief increase in radiation didn’t pose any health dangers, authorities said. The recorded peak levels were indeed lower than the cosmic radiation that plane passengers are exposed to on longer flights or doses that patients get during some medical scans.

The authorities haven’t registered any increase in radiation since then. Local emergency officials also said ground samples from around the area revealed no trace of radioactive contamination.

On Monday, Nyonoksa residents were asked to leave the village for several hours, causing new worries. The order was quickly rescinded by the military, who said they canceled the activities at the range that had warranted the initial evacuation order.

Arkhangelsk region Gov. Igor Orlov said, “There is no evacuation,” and he claimed that some reports about the incident sought to sow panic.

Neither the Defense Ministry nor Rosatom identified the type of weapon that exploded during the test.

But Rosatom’s statement said the explosion occurred during tests of a “nuclear isotope power source,” which led observers to conclude it was the “Burevestnik” or “Storm Petrel,” a nuclear-powered cruise missile. NATO has code-named the missile “Skyfall.”

The missile was first revealed by Russian President Vladimir Putin in his 2018 state-of-the-nation address, along with other doomsday weapons.

President Donald Trump backed that theory Monday, tweeting, “The Russian ‘Skyfall’ explosion has people worried about the air around the facility, and far beyond. Not good!” Trump added that “the United States is learning much from the failed missile explosion in Russia. We have similar, though more advanced, technology.”

Both the U.S. and the Soviet Union worked on nuclear-powered missiles in the 1960s, but they abandoned such designs as too unstable and dangerous to operate.

When he spoke about the prospective nuclear-powered cruise missile, Putin claimed it will have an unlimited range, allowing it to circle the globe undetected by missile defense systems. He said the missile had successfully undergone the first tests, but many observers have remained skeptical, arguing that such a weapon could be very difficult to handle and pose a threat to the environment.

Some media reports indicated that previous tests of the Burevestnik had been conducted on the barren Arctic archipelago of Novaya Zemlya and the Kapustin Yar testing range in southern Russia.