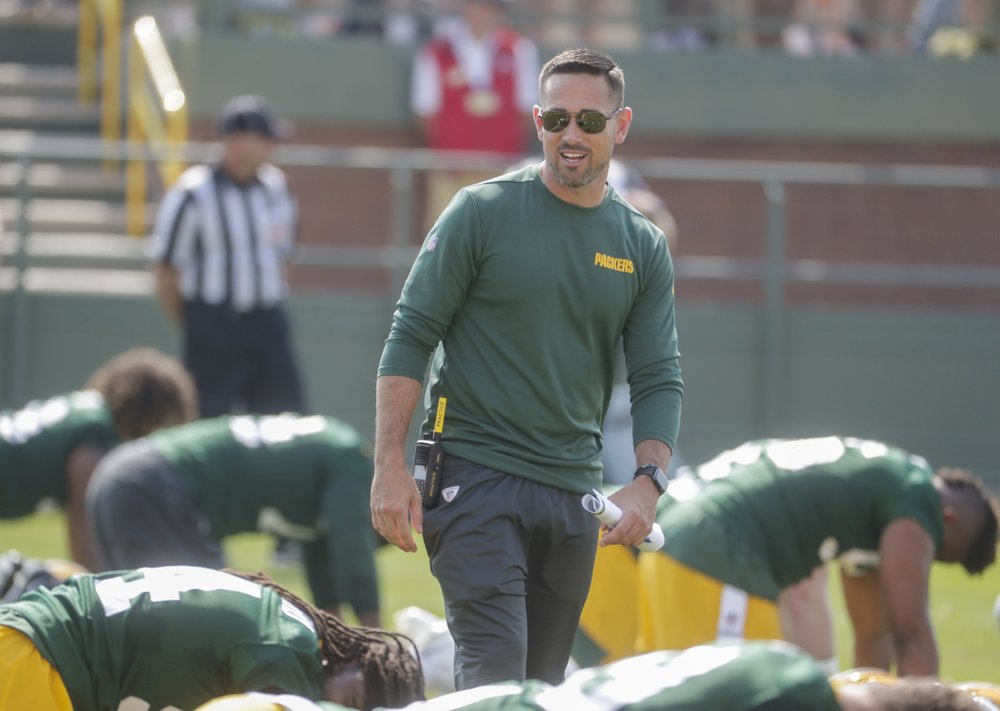 GREEN BAY, Wis. (AP) — Aaron Rodgers considers himself and first-year Packers coach Matt LaFleur to be friends. He also knows building chemistry on the field will take a lot of time and patience.

“The on-the-field relationship is one that grows over time,” Rodgers said Thursday after Green Bay’s first practice of training camp. “He hasn’t called a play in to me in a game situation yet, so there’s a process of feeling comfortable with the way the play comes in. Him trusting me and me trusting him. But I feel great about the communication.”

The two-time NFL MVP is entering his 15th season — 12th as a starter — and now has a rookie head coach who is just four years his senior. But Rodgers said he has enjoyed getting to know the 39-year-old LaFleur, who was hired in January after serving as Titans offensive coordinator last season.

“He’s in every meeting,” Rodgers said of LaFleur. “We spend time one-on-one talking about stuff. He’s the main voice in the offensive room. He really appreciates open conversation and ideas and creativity. It’s been a great relationship and a great start to it. I look forward to that growing and getting into that rhythm with him as a play-caller.”

LaFleur’s first season as a play-caller in the NFL was last season with Marcus Mariota. LaFleur guided Mariota to the highest completion percentage (68.9) of his young career. The previous season, LaFleur was the Rams offensive coordinator under head coach and offensive play-caller Sean McVay.

Now, LaFleur must find a way to revive a storied franchise that has missed the playoffs the past two seasons and hasn’t fallen short three years in a row since the early 1990s. The real work is now truly underway.

“You know, I think it’s early on, it’s Day 1,” LaFleur said. “It’s about us setting standards and just how we operate as a football team. I thought there was a lot of good things, and a lot of things we can work on. I think one of the things I hit on at the end was just urgency from drill. I felt like there was a little lag out there a little bit.”

Rodgers felt it, too, and he was picked off by Blake Martinez during a red zone drill.

“I felt we were maybe just a tad bit sluggish until the last period,” he said. “Coach actually mentioned maybe we should have the music up that loud the entire practice. I felt like it may have been a little sluggish. For some of us, I can speak for myself, I was a little bit sore from the run test yesterday. But I’m old, so I’ve got a built-in excuse.”

Much was made this summer about how much Rodgers will be allowed to audible in LaFleur’s offense. Both have mentioned it’s a matter of building trust in each other. Rodgers said that trust will come as he simply learns what LaFleur wants.

“For me, I’m a visual learner,” he said. “I can figure it out on paper and I’m fine with that, but I like to see it as well. It helps me to kind of lock it into my brain. So the more questions I ask, the more film he shows, the better I feel about concepts, the better he feels knowing that I’m confident in what we’re doing. That’s how the relationship goes.”

Rodgers is under contract through 2023, which means he and LaFleur’s deals run concurrently (including LaFleur’s option year).

Notes: Rookie S Darnell Savage did not practice Thursday as he continues to recover from getting his wisdom teeth removed. Raven Greene got reps with the first team in Savage’s absence. … CB Josh Jackson also did not participate as he nurses a foot injury. Jackson said after practice that he doesn’t expect to be out long. … RB Dexter Williams did not participate due to illness.

Keith Jenkins can be reached at https://twitter.com/MrKeithJenkins