Apollo 11 at 50: Celebrating first steps on another world 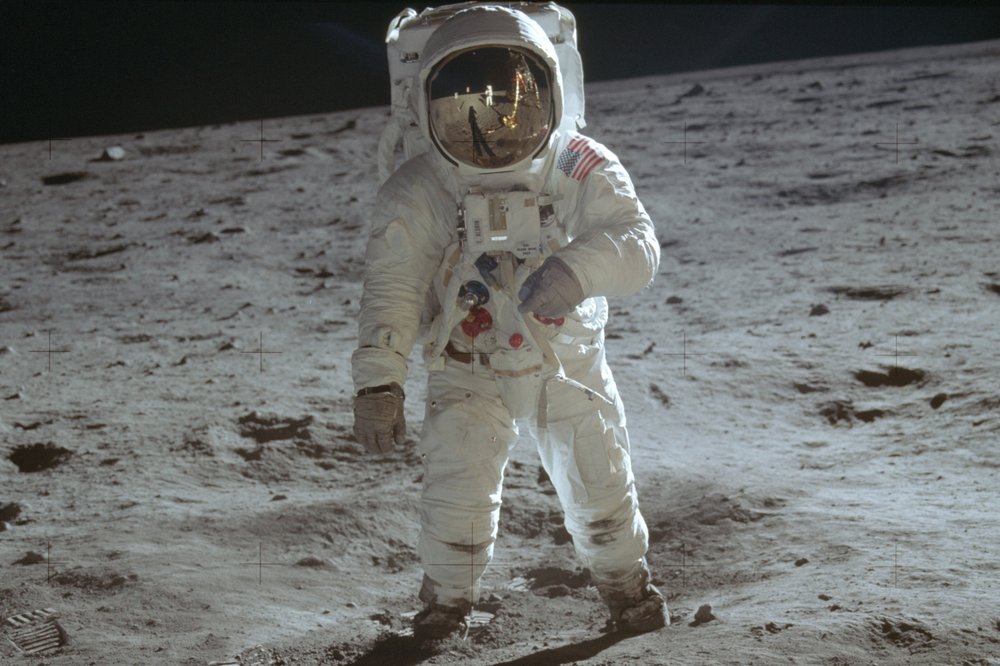 In this July 20, 1969 photo made available by NASA, astronaut Buzz Aldrin, lunar module pilot, walks on the surface of the moon during the Apollo 11 extravehicular activity. (Neil Armstrong/NASA via AP)

CAPE CANAVERAL, Fla. (AP) — A half-century ago, in the middle of a mean year of war, famine, violence in the streets and the widening of the generation gap, men from planet Earth stepped onto another world for the first time, uniting people around the globe in a way not seen before or since.

Hundreds of millions tuned in to radios or watched the grainy black-and-white images on TV as Apollo 11′s Neil Armstrong and Buzz Aldrin set foot on the moon on July 20, 1969 , in one of humanity’s most glorious technological achievements. Police around the world reported crime came to a near halt that midsummer Sunday night.

Astronaut Michael Collins, who orbited the moon alone in the mother ship while Armstrong proclaimed for the ages, “That’s one small step for man, one giant leap for mankind,” was struck by the banding together of Earth’s inhabitants.

“How often can you get people around our globe to agree on anything? Hardly ever,” Collins, now 88, told The Associated Press in a recent interview. “And yet briefly at the time of the first landing on the moon, people were united. They felt they were participants.”

He added, “It was a wonderful achievement in the sense that people everywhere around the planet applauded it: north, south, east, west, rich, poor, Communist, whatever.”

That sense of unity did not last long. But 50 years later, Apollo 11 — the culmination of eight years of breakneck labor involving a workforce of 400,000 and a price tag in the billions, all aimed at winning the space race and beating the Soviet Union to the moon — continues to thrill.

“Think of how many times you hear people say, ‘Well, if we could land a man on the moon, we could certainly do blah, blah, blah,’” said NASA chief historian Bill Barry, who like many other children of the 1960s was drawn to math and science by Apollo. “It really, I think, has become a throwaway phrase because it gets used so often. It gets used so often because I think it had an impact.”

For the golden anniversary , NASA, towns, museums and other institutions are holding ceremonies, parades and parties , including the simultaneous launch of 5,000 model rockets outside the installation in Huntsville, Alabama, where the behemoth Saturn V moon rockets were born. Apollo 11K and Saturn 5K runs are “go” at NASA’s Kennedy Space Center.

In nearby Titusville, the American Space Museum and local businesses will mark the exact moment of the moon landing by lifting cups of Tang, the powdered orange drink that rocketed into orbit with the pioneers of the Space Age.

Armstrong, who expertly steered the lunar module Eagle to a smooth landing with just seconds of fuel left, died in 2012 at 82. Aldrin, 89, who followed him onto the gray, dusty surface, was embroiled recently in a now-dropped legal dispute in which two of his children tried to have him declared mentally incompetent. He has kept an uncharacteristically low profile in the run-up to the anniversary.

Many of the Apollo program’s other key players are gone as well. Of the 24 astronauts who flew to the moon from 1968 through 1972, only 12 are still alive. Of the 12 who walked on the moon, four survive.

A vast majority of Earth’s 7.7 billion inhabitants were born after Apollo ended, including NASA’s current administrator, 44-year-old Jim Bridenstine, who is overseeing the effort to send humans back to the moon by 2024.

Back in 1961, NASA had barely 15 minutes of human suborbital flight under its belt — Alan Shepard’s history-making flight — when President John F. Kennedy issued the Cold War-era challenge of landing a man on the moon by decade’s end and returning him safely.

At the time, the Soviets were beating America at every turn in the space race, with the first satellite, Sputnik, the first spaceman, Yuri Gagarin, and the first lunar probes.

“I was used to facing up to impossible things. We were in the rocket business, so we were doing some weird and wonderful things back in those days. But, yes, it was an unbelievable announcement at that time,” he said. “It took a lot of guts.”

NASA’s Project Mercury gave way to the two-man Gemini flights, then the three-man Apollo program, dealt a devastating setback when three astronauts were killed in a fire during a 1967 test on the launch pad. The pace was relentless amid fears the Soviets would get to the moon first.

“You know how we got to the moon as fast as we did is because we burned people out,” said Homer Hickam, a retired NASA engineer whose autobiography, “Rocket Boys,” became the 1999 movie “October Sky.”

“Come to Huntsville, go to the cemetery, look at all those young men who are dead down there. They worked themselves to death,” Hickam said. “Or better yet, go to the courthouse and look at all the divorce records. They abandoned their families.”

The pressure was so intense leading up to the flight that Collins developed tics in both eyes.

Launch day — Wednesday, July 16, 1969 — dawned with an estimated 1 million people lining the sweltering beaches and roads of what had been renamed Cape Kennedy in memory of the slain president.

The firing room was filled with 500 launch controllers and managers in white shirts and skinny ties, including Wernher von Braun, the German-born mastermind behind the Saturn V.

The Saturn V stood 363 feet (110 meters) tall, the largest, most powerful rocket ever flown. Unbeknownst to most of the world, just two weeks earlier, the Soviets’ even mightier moon rocket exploded moments after liftoff, destroying the Kremlin’s moon dreams.

At 9:32 a.m. EDT, the Saturn V roared off Pad 39A, its astronauts hurtling toward their destination and destiny 240,000 miles (386,000 kilometers) away. The command module, Columbia, and the attached lunar module, Eagle, reached the moon three days later. The next day, July 20, Armstrong and Aldrin descended to the surface in the lunar module.

Collins wasn’t overly concerned about Armstrong and Aldrin getting down to the moon. Rather, he worried about them getting off the moon and back to the mother ship. He kept his fears to himself.

“If it was unthinkable, it was unsayable also,” Collins told the AP. “We never discussed or hinted at their getting stranded on the moon. I mean, we were not fools, and we knew darn well that a lot of things had to go exactly right for them to ascend as they were supposed to do.”

President Richard Nixon even had a speech prepared in case of disaster: “Fate has ordained that the men who went to the moon to explore in peace will stay on the moon to rest in peace.”

As it turned out, descent proved more alarming than ascent.

With minutes remaining to touchdown, the Eagle was rattled by one computer alarm then another. Caution lights flashed. But flight controllers had rehearsed that very scenario right before the flight, and so guidance officer Steve Bales knew it was safe to proceed rather than abort.

Then a boulder-strewn crater the size of a football field appeared at the target landing site, and Armstrong had to keep flying, looking for somewhere safe to put down. Aldrin called out the distance to the surface — 75 feet, 40 feet, 30 feet — as Mission Control informed the astronauts of the fuel remaining.

Finally came word from Armstrong: “Houston, Tranquility Base here. The Eagle has landed.”

“You got a bunch of guys about to turn blue. We’re breathing again,” Mission Control’s Charlie Duke radioed back. (He would walk on the moon three years later.)

Working in one-sixth Earth’s gravity, they gathered rocks , set up experiments, planted an American flag stiffened with wires to make it look as if it were waving in the windless vacuum and took a congratulatory call from Nixon, who observed, “For one priceless moment in the whole history of man, all the people on this Earth are truly one.”

Dave Waldrup of Reston, Virginia, watched on TV that day, his 15th birthday, and recalled thinking: “Wow! What are we going to do next? It’s literally not just the sky, but outer space is the limit. And I can’t wait to be part of it.” He went on to become an Air Force pilot and is now a volunteer at the National Air and Space Museum.

The moonwalk lasted 2½ hours. The Eagle later reunited with Columbia, and the three astronauts headed home, splashing down July 24 in the Pacific.

Buzz Aldrin’s bootprint in the lunar soil. (Buzz Aldrin/NASA via AP)
After spending 2½ weeks in quarantine in case they brought back deadly moon germs, Armstrong, Aldrin and Collins were given a ticker-tape parade in New York, followed by a frenzied monthlong world tour in which they met kings, queens and Pope Paul VI.

Five more missions took men to the surface of the moon — Apollo 13 had to be aborted because of an explosion — before Project Apollo came to a premature end, the last three flights on the schedule scrapped. NASA put the entire Apollo tab at $25 billion, equivalent to more than $150 billion in today’s dollars.

The first lunar landing, at least, lifted America’s spirits — indeed, the planet’s — when it needed it.

“The Vietnam War, civil strife, racial strife, all kinds of stuff going on that was bad, which I wasn’t paying much attention to because I was working so hard in the space world. The Cold War and all of that,” said JoAnn Morgan, Apollo 11′s lone female launch controller. “It was such a demonstration of the power and the passion of our country.”

She added: “I mean, literally, we did exactly what JFK said we would do.”

Follow AP’s full coverage of the Apollo 11 anniversary at: https://apnews.com/Apollo11moonlanding