Iowa, Nevada to launch caucus voting by phone for 2020 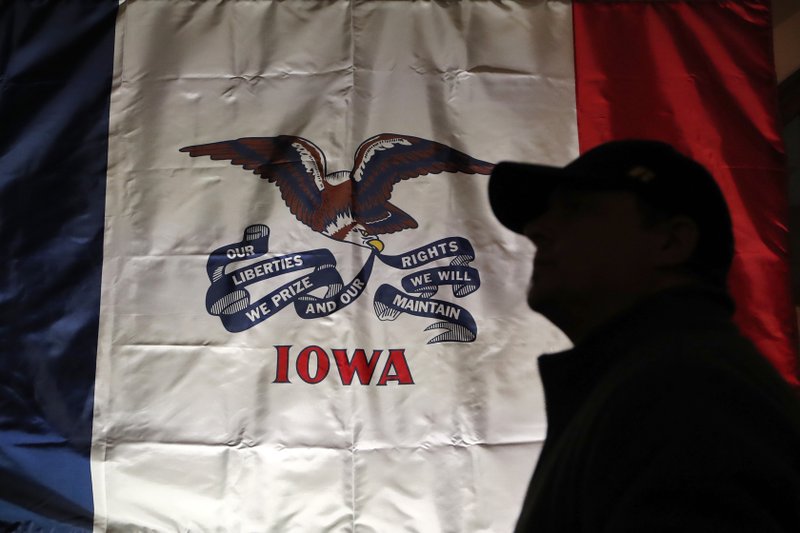 FILE - In this March 8, 2019 file photo, an audience member arrives at a rally for 2020 Democratic presidential candidate at the University of Iowa in Iowa City, Iowa. Democrats in the early presidential voting states of Iowa and Nevada will be able next year to skip their states’ traditional neighborhood caucus meetings and instead cast their votes over the phone, according to plans unveiled by the state parties. (AP Photo/Charlie Neibergall)

DES MOINES, Iowa (AP) — Democrats in the early presidential contest states of Iowa and Nevada will be able to cast their votes over the telephone instead of showing up at their states’ traditional neighborhood caucus meetings next February, according to plans unveiled by the state parties.

The tele-caucus systems, the result of a mandate from the Democratic National Committee, are aimed at opening the local-level political gatherings to more people, especially evening shift-workers and people with disabilities, whom critics of the caucuses have long said are blocked from the process.

The changes are expected to boost voter participation across the board, presenting a new opportunity for the Democratic Party’s 2020 candidates to drive up support in the crucial early voting states.

“This is a no-excuse option” for participation, said Shelby Wiltz, the Nevada Democrats’ caucus director.

Party officials don’t have an estimate of how many voters will take advantage of the call-in option. But in Iowa, some recent polls show as many as 20% of Democrats will participate virtually. In Nevada, most voters tend to cast ballots early during regular elections, and party officials expect many will take advantage of the early presidential vote.

While rolling out a new voting system holds the promise of more voter participation, it also comes with potential risk for confusion or technical troubles. But the party is moving forward to try and address long-standing criticism that the caucuses are exclusionary and favor some candidates over others.

The Iowa caucuses, a series of party-run, local-level organizing meetings that adopted a presidential preference element more than 50 years ago, have come under increasing criticism in the past decade for their fixed evening time and place. Such rules effectively barred participation in the first-in-the-country nominating contest, for instance, for parents unable to find child care or older voters hesitant to venture out in the dead of winter.

Hillary Clinton and her supporters complained that Iowa’s process “disenfranchised” those unable to attend after she finished a disappointing third place in the 2008 caucuses.

In 2016, backers of Sen. Bernie Sanders cried foul over the Iowa results when Clinton won a razor-thin margin, 49.9% to 49.6%, despite some irregularities in reporting results. The dispute, replicated in part in Nevada, was a key factor in the push from groups on the left to overhaul the nominating process heading into 2020.

Nevada, the third state in the Democrats’ early contest sequence, has only been using caucuses for a decade, but has faced some of the same participation challenges, especially among Las Vegas casino workers who have shifts during the Saturday caucus meetings.

By opting for a dial-in program, the systems can reach people in Iowa’s and Nevada’s vast rural stretches where broadband internet coverage may be spotty. Iowa since 2014 has offered a smaller-scale tele-caucus, allowing out-of-state members of the military and Iowans living abroad to call in to live neighborhood caucus meetings and participate over the phone.

“One, we are a rural state. And let’s be honest, outside of Las Vegas and Reno, Nevada is a rural state. Everyone is connected by phone,” Iowa Democratic Party Chairman Troy Price said.

The DNC’s mandate has been a challenge for party operatives who sought to maintain security while also maintaining the spirit of the caucuses, which are chiefly local, party-building activities aimed at electing delegates to party conventions. Officials say by avoiding an internet-based program, they are reducing the risk of hacking, a key concern in an era of renewed concern about election tampering.

“With this system, it’s easier than making sure thousands of computers across the state are not filled with malware and not being hacked,” Price said.

Yet officials acknowledge that relying on phone systems does raise security concerns.

“Are they unhackable? Certainly not,” said Jeremy Epstein, a voting systems expert with ACM, the largest international association of computer science professionals. “None of these technologies are really bullet proof.”

The state parties presented their plans late last month to the DNC’s Rules and Bylaws Committee. Committee members applauded the work and gave conditional approval but asked for more information about the security and functionality of the systems.

“We are working with every state party that is integrating these tools so they can make their voting process secure and successful. We look forward to working with Democrats in these states to address the committee’s questions,” DNC spokesman David Bergstein said in a statement.

Both state parties plan to require Democratic voters to register online in advance of their virtual caucus, verifying their identity with a “multi-factor authentication.” Voters will receive a PIN that they’ll have to enter when they call in to participate.

Iowans who register on time will have six times to choose from to participate by phone, including the in-person caucus night, Feb. 3. Nevadans who register for the virtual caucus can participate on Feb. 16 or 17. Unlike Iowa, Nevada is also offering three days of in-person early caucusing to give people more options.

Wiltz said security experts with the DNC will be vetting the systems later this year to test for vulnerabilities to breaches or hacking.

“This isn’t something that we’re taking lightly. We understand our responsibility,” Wiltz said.