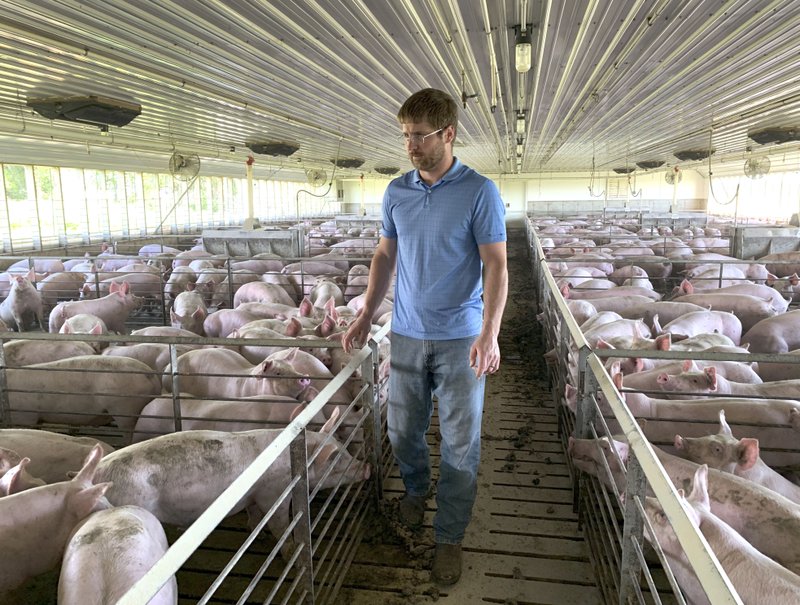 In this Tuesday, June 25, 2019, photo, farmer Matthew Keller walks through one of his pig barns near Kenyon, Minn. When the Trump administration announced a $12 billion aid package for farmers struggling under the financial strain of his trade dispute with China, the payments were capped. But records obtained by The Associated Press under the Freedom of Information Act show that many large farming operations easily found legal ways around the limits to collect big checks. Recipients who spoke to AP defended the payouts, saying they didn't even cover their losses under the trade war and that they were legally entitled to them. Keller, who also grows crops to feed his livestock, said he "definitely appreciated" the $143,820 he collected from the program. It didn't cover all his losses but it helped with his cash flow, he said. He reached the $125,000 cap on his hogs, and the remaining money was for his soybeans and corn. (AP Photo/Jeff Baenen)

MINNEAPOLIS (AP) — When President Donald Trump’s administration announced a $12 billion aid package for farmers struggling under the financial strain of his trade dispute with China, the payments were capped. But many large farming operations had no trouble finding legal ways around them, records provided to The Associated Press under the Freedom of Information Act show.

The government paid nearly $2.8 million to a Missouri soybean operation registered as three entities at the same address. More than $900,000 went to five other farm businesses, in Indiana, Illinois, Tennessee and two in Texas. Three other farming operations collected more than $800,000, and 16 others collected over $700,000.

Recipients defended the payouts, saying they didn’t cover their losses from the trade war and they were legally entitled to them. Department of Agriculture rules let farms file claims for multiple family members or other partners who meet the department’s definition of being “actively engaged in farming.”

But U.S. Sen. Charles Grassley, an Iowa Republican who has long fought for subsidy limits, and other critics say it’s the latest example of how loopholes let large farms collect far more than the supposed caps.

Grassley said in a statement to AP that some of the nation’s largest farms are receiving huge subsidies “through underhanded legal tricks. They’re getting richer off the backs of taxpayers while young and beginning farmers are priced out of the profession. This needs to end. The Department of Agriculture needs to re-evaluate its rules for awarding federal funds and conduct more thorough oversight of where it’s funneling taxpayer dollars.”

USDA officials said they believe its rules are being followed and that procedures are in place to audit recipients.

About 83 percent of the aid under the Market Facilitation Program has gone to soybean farmers because they’ve suffered most under China’s retaliatory tariffs. The program sets a $125,000 cap in each of three categories of commodities: one for soybeans and other row crops, one for pork and dairy, and one for cherries and almonds. But each qualified family member or business partner gets their own $125,000 cap for each category. Farmers who produce both soybeans and hogs, for example, would have separate caps for each and could thus collect $250,000.

This Graphic shows that USDA paid out far more in subsidies to soybean farmers than other commodities.

But there are legal ways around those caps.

USDA data show the biggest beneficiary has been DeLine Farms Partnership and two similarly named partnerships registered at the same address in Charleston, Missouri, that collected nearly $2.8 million. They’re led by Donald DeLine and his wife, Lisa DeLine. Their attorney, Robert Serio, said the partnerships qualified legally and probably could have qualified for more if not for the caps. He said each partnership farms around 27,000 acres and is made up of eight or nine partners who all meet the “actively engaged” requirement.

USDA spokesman Dave Warner said the department couldn’t comment on the specifics of the DeLines’ operations but that such a large claim was likely audited to ensure eligibility.

At Peterson Farms in Loretto, Kentucky, eight members of the family partnership collected a total $863,560 for crops grown on over 15,000 acres, including wheat and corn used at the nearby Maker’s Mark bourbon distillery.

Co-owner Bernard Peterson said it didn’t make up for all their losses at a time when it was already hard to be profitable. The $1.65 per bushel aid payments for soybeans fell well short of losses he estimated at $2 to $2.50 per bushel.

“It’s a big number but there are a big number of people directly depending on the success of our operation in the community,” he said.

The numerous ways around the caps mean that millions of subsidy dollars flow to “city slickers who are stretching the limits of the law,” said Scott Faber, senior vice president of government affairs at the Environmental Working Group, which has criticized federal farm subsidy programs as biased toward big producers and promoting environmentally damaging farming practices. Urban dwellers might play only a small role in an operation without ever setting foot on the farm because of the loose definitions for who qualifies, he said.

Matt Keller, a pork producer in Kenyon, Minnesota, said he appreciated the $143,820 he got. It didn’t cover all his losses but helped with cash flow, he said. He reached the $125,000 cap on his hogs, and the remaining money was for his soybeans and corn.

Keller said his wife and other family members are all involved in his operation, which produces about 29,000 pigs per year. He doesn’t blame the trade wars for depressed hog prices, but said the tariffs, on top of oversupply, have made things even tougher.

“It was kind of a relief, I guess, that we had a little support from the president and the country,” Keller said.