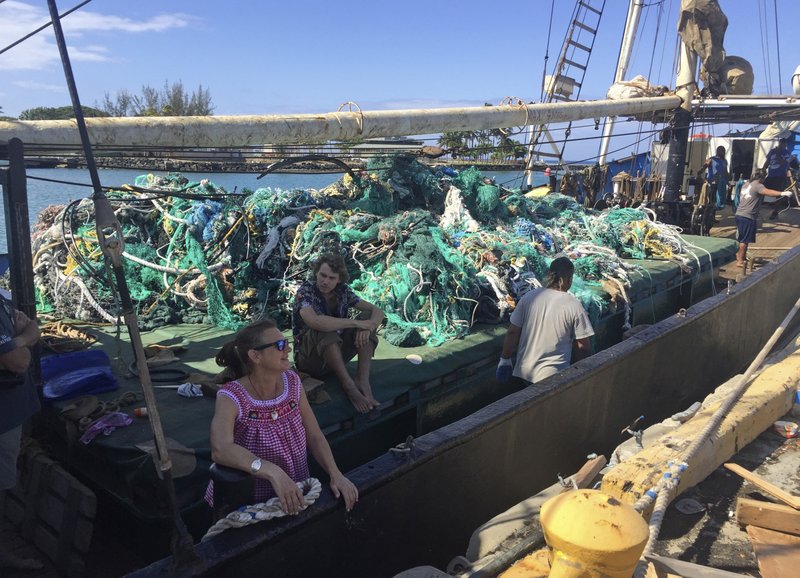 In this photo taken June 18, 2019, provided by the Ocean Voyages Institute, are nets brought in by the sailing ship Kwai from the Pacific gyre cleanup in Honolulu. Mariners on a sailing vessel hundreds of miles from the Hawaiian coast picked up more than 40 tons of abandoned fishing nets in an effort to clean a garbage patch in the Pacific Ocean, where the nets can entangle whales, turtles and fish and damage coral reefs. The crew of volunteers with the California-based nonprofit Ocean Voyages Institute fished out the derelict nets from a marine gyre between Hawaii and California known as the Great Pacific Garbage Patch during a 25-day expedition, the group's founder, Mary Crowley, announced Friday, June 28, 2019. (AJ Jaeger/Ocean Voyages Institute via AP)

SAN FRANCISCO (AP) — In a mission to clean up trash floating in the ocean, environmentalists pulled 40 tons (36 metric tons) of abandoned fishing nets this month from an area known as the Great Pacific Garbage Patch.

Mariners on a 140-foot (43-meter) cargo sailboat outfitted with a crane voyaged from Hawaii to the heart of the Pacific Ocean, where they retrieved the haul of mostly plastic fishing nets as part of an effort to rid the waters of the nets that entangle whales, turtles and fish and damage coral reefs.

The volunteers with the California-based nonprofit Ocean Voyages Institute fished out the derelict nets from a marine gyre location where ocean currents converge between Hawaii and California during their 25-day expedition, the group’s founder, Mary Crowley, announced Friday.

The group is among a handful of nonprofits working to collect plastic trash from the open ocean, an endeavor that can be dangerous, time consuming and expensive.

“Our success should herald the way for us to do larger clean ups and to inspire clean ups all throughout the Pacific Ocean and throughout the world. It’s not something that we need to wait to do,” Crowley said.

The cargo ship returned June 18 to Honolulu, where 2 tons (1.8 metric tons) of plastic trash were separated from the haul of fishing nets and donated to local artists to transform it into art work to educate people about ocean plastic pollution. The rest of the refuse was turned over to a zero emissions energy plant that will incinerate it and turn it into energy, she said.

A year before they went to pick up the nets, the Sausalito, California-based group gave sailors going from California to Hawaii buoyant GPS trackers the size of bowling balls to attach to the nets they encountered during their voyage so they could be tracked.

The group then sailed to collect the nets entangled with plastic chairs, bottles and other trash in an effort that cost $300,000. The group plans to deploy dozens more GPS trackers and next year embark on a three-month trash collection expedition, Crowley said.

It is estimated that between 600,000 and 800,000 metric tons of fishing gear is abandoned or lost during storms each year in the oceans, said Nick Mallos, Director of the Trash Free Seas Program at Ocean Conservancy, a nonprofit environmental advocacy group.

Another 9 million tons (8 million metric tons) of plastic waste, including plastic bottles, bags, toys and other items, flow annually into the ocean from beaches, rivers and creeks, according to experts.

The Ocean Voyages Institute is one of dozens of groups around the world trying to tackle the problem. Most focus on cleaning up beaches, ridding shores of abandoned fishing nets, traps and other gear and pushing for a reduction on single-use plastic containers.

Collecting the trash already in the gyres is also the goal of The Ocean Cleanup project, which was started by Dutch innovator Boyan Slat and last year first deployed a trash collection device to corral plastic litter floating in the Great Pacific Garbage Patch.

The group has raised millions of dollars from donors around the world, including San Francisco billionaire Marc Benioff.

The buoyant, 2,000-foot (600-meter) long boom was floating 800 miles (1,300 kilometers) from Hawaii’s coast when it broke apart under constant wind. After being repaired, it was re-deployed last week.