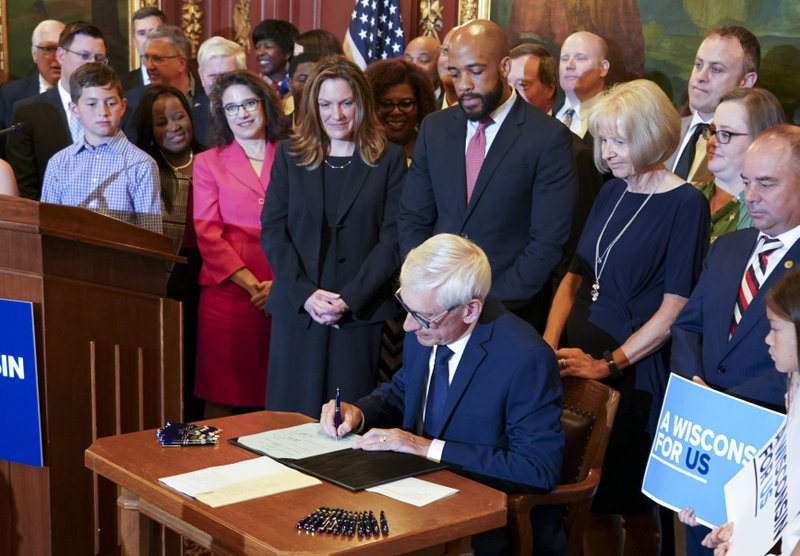 Wisconsin Gov. Tony Evers signs the budget Wednesday, July 3, 2019 at the State Capitol in Madison, Wis. Evers made 78 partial vetoes to the state budget passed by the Republican-controlled Legislature before signing it . (Steve Apps/Wisconsin State Journal via AP)

MADISON, Wis. (AP) — Wisconsin Gov. Tony Evers made 78 partial vetoes to the state budget passed by the Republican-controlled Legislature before signing it Wednesday, ignoring pleas from some liberals who wanted the new Democratic governor to reject the entire two-year spending plan.

The last budget, when Republicans controlled all three branches of the government, under Scott Walker, the budget didn’t get passed until Sept. 21, 2017, nearly three months past the deadline.

The budget Evers signed has increases in funding for K-12 schools, roads and health care, but far less than what the governor wanted. It also doesn’t meet many of his stated priorities, most notably accepting federal money to expand Medicaid, legalizing medical marijuana or raising the gas tax as part of a long-term plan to pay for roads.

But Evers and Democratic lawmakers, who were united in voting against it, cast the two-year spending plan in a positive light, calling it a “down payment” on progress.

Republicans, who quibbled with some of the Evers vetoes, largely took a victory lap.

“I told you this was a good budget,” said Republican Sen. Scott Fitzgerald at a news conference, adding that Evers “basically signed the Republican version of the budget.”

Republicans don’t have the votes to override any of Evers’ vetoes and Fitzgerald said he didn’t know if any would be pursued.

Evers decided against taking the unprecedented step of vetoing the entire budget, saying that “would have been more of the same divisiveness and petty, political theatrics that the people of Wisconsin have had to put up with for far too long.”

Instead, Evers took a more moderate approach and used his broad veto powers to increase funding for K-12 schools by $65 million. He also eliminated a provision benefiting electric car manufacturer Tesla, scrapped funding to start building a new adult prison to replace one in Green Bay and took away money to prevent the implementation of new drug test and work requirements for adults on the state’s food stamp program.

Republicans had urged Evers to sign the $82 billion budget, which they cast as a compromise. Evers said the budget he was signing was “insufficient” in many ways.

“This is, in large part, due to the unfortunate lack of interest by some Republicans in the Legislature to work together and engage in constructive, bipartisan dialogue, and instead devoting far too much time to huffing and puffing,” Evers wrote to lawmakers.

Evers vowed to keep up the fight for Medicaid expansion, saying he will make it a campaign issue against Republican lawmakers in 2020.

Evers acknowledged some successes in the budget, including a 10% middle class tax cut, more than $465 million in new funding for roads, efforts to combat water pollution and more funding for health care programs. Evers said his partial vetoes more closely align the budget with what he originally proposed.

Wisconsin’s governor has among the most expansive veto powers in the country, allowing him to strike out words within sentences to create new meanings, eliminate entire sections of the budget and individual digits in dollar amounts appropriated.

Republicans tried to tighten language in this budget to limit Evers’ ability to make dramatic changes. Evers said he didn’t feel like they blocked him from doing what he wanted and he “used every possible creative way to veto this budget” to make it closer to what he originally proposed.

The most significant vetoes from Evers, the former state superintendent of schools, came in K-12 funding where he was able to bolster overall funding by $65 million more than Republicans wanted. That will bring the total increase for schools to about $570 million.

Evers also eliminated a late addition to the budget that would have allowed Tesla to sell its vehicles directly to customers rather than through independent dealers. That was added to help secure the support of Republican state Sen. Chris Kapenga , a key vote in the Senate which narrowly passed the budget last week 17-16.

Kapenga did not immediately return a message seeking comment.

Evers also vetoed a provision that would have forbidden security costs for Lt. Gov. Mandela Barnes to exceed those of his GOP predecessor, Rebecca Kleefisch. Republicans have been critical of the level of security Barnes has had since taking office.

Barnes, the first African American lieutenant governor in Wisconsin history, had nine times more hours of security protection during his first two months in office than Kleefisch had all of last year. There has been no stated security threat for the extra coverage.