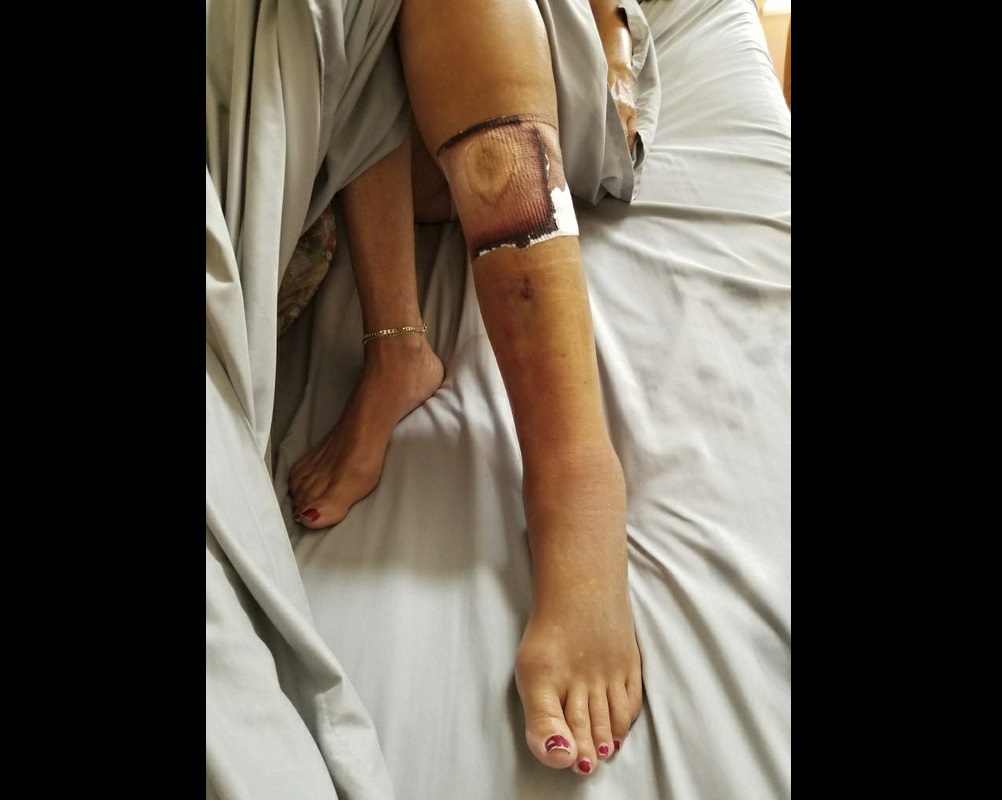 In this undated photo made available by Wade J. Fleming, the leg of his mother Lynn Fleming is seen shortly after she suffered a small cut while walking in Coquina Beach near Bradenton, Fla. Fleming was later diagnosed with flesh-eating disease and died days later. (Wade Fleming via AP)

MIAMI (AP) — A 77-year-old woman was infected by flesh-eating bacteria and died nearly two weeks after she fell and scraped her leg while walking on a Florida beach, her family said Monday.

Wade Fleming told The Associated Press that his mother Lynn Fleming, who retired to Florida’s Gulf Coast, stumbled and fell into the water on Coquina Beach while her family was visiting from Pittsburgh. The wound swelled up and continued to bleed, leading her to urgent care where she was prescribed antibiotics and given a tetanus shot.

The woman was taken a day later to the hospital, where she was diagnosed with the flesh-eating disease and died Thursday after suffering two strokes and organ failure.

Lynn Fleming’s death follows the case of a 12-year-old girl from Indiana, who scraped her toe and contracted the same rare bacteria while vacationing last month in a Florida Panhandle beach. The bacteria thrive in warm, salty water, and usually are found in the South. Kylei Brown almost lost her leg and needs physical therapy to be able to walk again.

A retired bank teller from Charleroi, Lynn Fleming dreamed of moving to the area south of Tampa.

“She always wanted to move to Florida, but my dad was semi-retired and he was a charter boat captain,” he said. “After he died, she pulled the trigger.”

Almost four years ago she moved to Ellenton, where she took walks, played cards and shared dinners with other retired friends from her singles club.

The day she scraped her leg she was taking one of her usual walks on the beach. Wade Fleming said the family didn’t think much of the cut, which was three-quarters of an inch (19 millimeters). But the blood continued to trickle down. Lynn Fleming invited her son and his family to her retirement community’s monthly dinner that night before they returned to Pittsburgh.

“You would never know that anything was wrong,” Fleming said.

After her son and family left, the wound got worse and her friends convinced her to go to urgent care, where she was given a tetanus shot and prescribed antibiotics. The next day when her friends were going to deliver the prescription drugs, they found her on her bedroom floor semiconscious. They rushed her to a hospital.

She was told she had been infected by the flesh-eating bacteria, Necrotizing fasciitis. She died after she suffered two strokes and septic shock during surgeries to save her leg.